Asking people to behave, instead of making them

A post by Joe Dunckley yesterday – about how we keep expecting education and awareness to change driver behaviour, ahead of physical engineering – reminded me of something I’d been meaning to write about for a while. It was provoked by this sign I came across in the village of Rotherwick, in Hampshire. 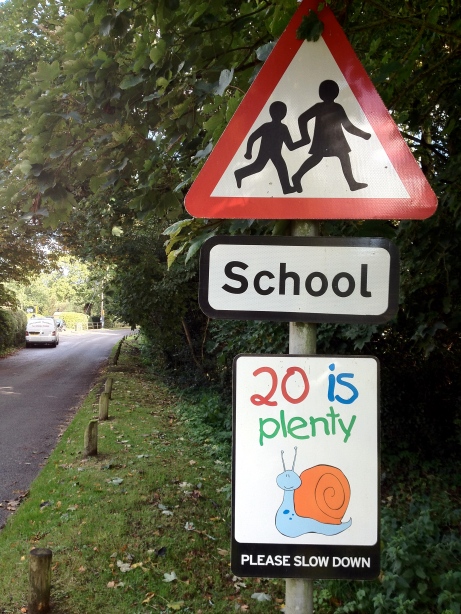 Beneath the standard ‘watch out for children’ warning triangle, some locals have evidently felt the need to ask drivers to ‘please’ slow down, attaching a do-it-yourself sign to the pole.

Needless to say, although the locals are asking drivers to slow down to 20mph, the speed limit through the village – and past the school – remains set at 30mph. The official limit is on the pole on the other side of the road.

But hey, drivers have been warned there’s a school here – they’ll all drive carefully, won’t they? 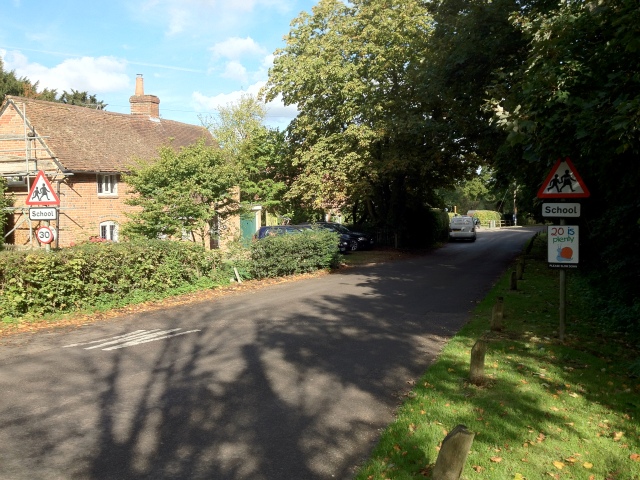 And there’s a similar example in the village of Partridge Green in West Sussex – again, by the village school. 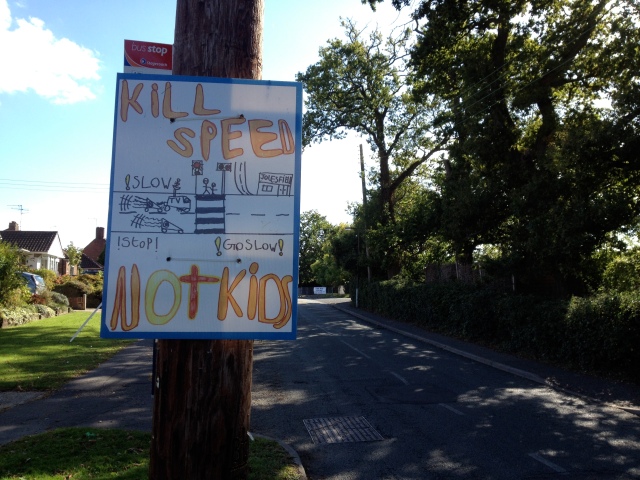 A ‘kill speed not kids’ sign near the junction with the school is, of course, not accompanied by any corresponding low speed limit, or physical measures to enforce it. 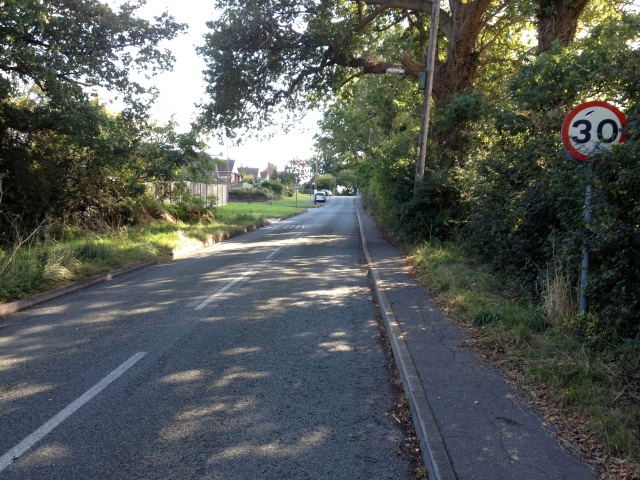 Although the DIY sign here has a picture of a zebra crossing, there isn’t any crossing, at all, outside the school itself – but there are some barriers to stop people crossing the road where they might actually want to. 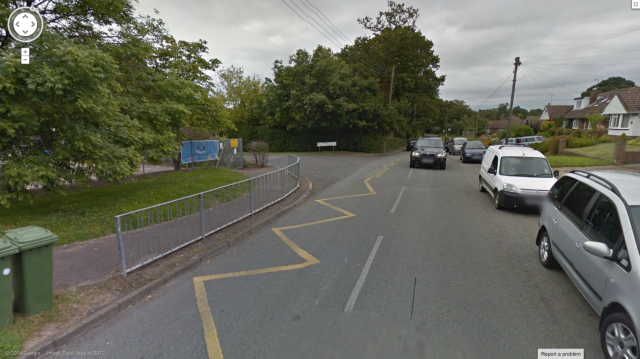 Perhaps the pick of the bunch, though, is this DIY sign outside William Penn Primary School in Coolham, which is aimed at… the primary schoolchildren themselves. Behave! 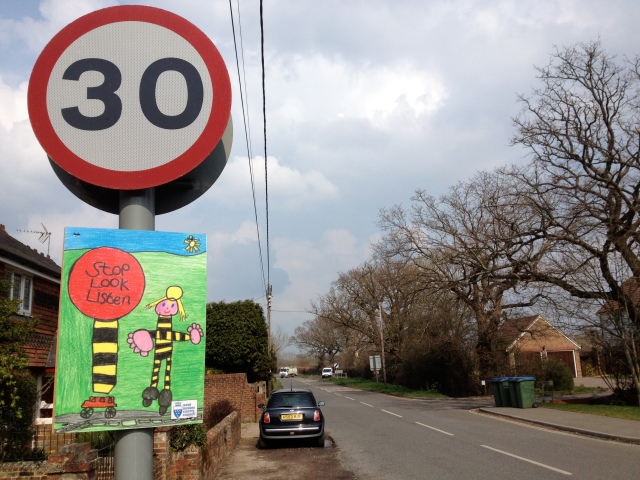 Nice of West Sussex County Council to do absolutely nothing to make this dead straight road – just outside of a 60mph limit – safer for schoolchildren.

And it’s not just outside schools. The residents of Tower Hill – a rural road, but with plenty of housing along it, and no footpath – plainly feel that the 60mph limit through where they live is preposterous, and have made their own speed limit signs. There have been many crashes here. 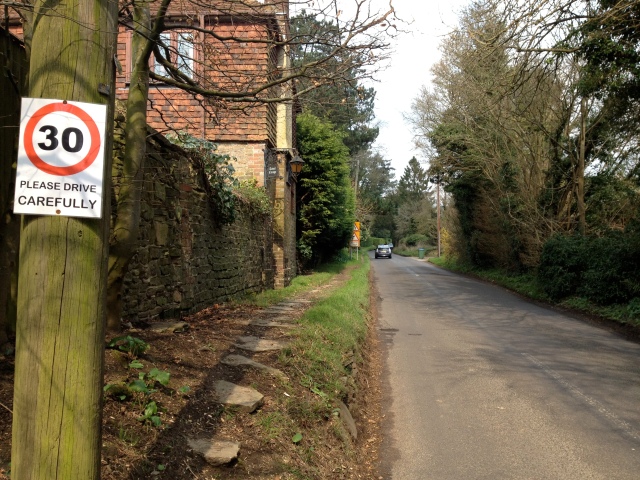 All this is sadly symptomatic of the British approach to dealing with traffic danger. At locations where there really shouldn’t be fast motor traffic, and where there is clear local demand for low vehicle speeds (people are making these signs and attaching them themselves) there isn’t anything to make drivers behave, or design that reduces the danger posed to vulnerable road users; only informal requests and home-made signs.

Perhaps the background assumption here is the one Joe describes in his post – that the British driver is innately well-mannered, and doesn’t really need to be told what to do; he’ll either be behaving sensibly already, and if not, polite requests will be sufficient.

the British tradition of soft measures goes far wider, deeper and further back… Motorists may moan about having been the victim of a “war” that restricts their freedom, polices their movements, or sends campaigns of severe punishment for accidental and unavoidable infringement of petty rules, but the reality is that right from the start, when the red flag acts were repealed, this country’s response (and that of much of the English-speaking world) to the problems that motorists create on the road has largely been light touch and libertarian, in which the children are simply asked again and again to play nice, even as they become ever greater bullies, and only if they’re really bad might they have their pocket money docked. We encourage and raise awareness, appeal to the legendary British sense of fair play, and still believe that the ideal road is within reach if only we can persuade everybody to get along through courtesy, good manners, and communicating our intentions clearly to one another.

But these homemade signs are symptomatic of a failure of that strategy. They wouldn’t exist if drivers responded properly to their environment; there wouldn’t be any need to exhort them to slow down to an appropriate speed if they were already doing it. Moreover, there wouldn’t be any need for barriers to stop children crossing the road where they want to, if we could rely on drivers approaching schools at a sensible speed.

What these signs demonstrate are that ‘soft’ measures – education, exhortation, awareness, and so on – don’t work. We need physical environments that make people behave, and that design in safety. If we want people to drive slowly, that needs to come from the design of the road or the street in question, not from home-made signs that plead desperately for sensible behaviour.

31 Responses to Asking people to behave, instead of making them