Last week I wrote a long post about how West Sussex County Council are proposing to use millions of pounds of ‘sustainable’ transport funding (distributed by the Coast to Capital Local Enterprise Partnership) on schemes that have negligible (or even non-existent) sustainable transport benefit.

Even those parts of the schemes that, by West Sussex’s own admission, have no sustainable transport benefit whatsoever, could obviously be designed to accommodate walking and cycling routes. But West Sussex have chosen not to do this. They want to build very large roundabouts on the edge of a major town that have absolutely no walking and cycling provision.

In that post I described how this is symptomatic of a wider problem with cycling outside of cities in Britain – West Sussex in particular is just one many local authorities that have no consistent stream of funding for genuinely sustainable transport, no real enthusiasm for engaging seriously with cycling as a mode of transport, and little or no expertise on how to design properly for it.

What cash that is available for cycling from central government – either through these LEP channels, or through the Local Sustainable Transport Fund – appears to dribble away, used on schemes and projects of negligible benefit.

This post is the first in a series that will examine what West Sussex has done with the £2.46 million of cash the county was awarded by the DfT for sustainable travel projects, to be spent between 2012 and 2015.

A case in point is the subject here. £140,000 of that DfT cash is being spent on the Northgate Gyratory in Chichester (with a further £70,000 coming from West Sussex’s own road safety budget). This is a very busy road system – dubbed ‘The Fire Station Roundabout’ (because it has a Fire Station in the middle of it) – just to the north of Chichester city centre. It is where the city’s inner ring road meets roads heading off to the north, out of Chichester.

It should be borne in mind that the Northgate Gyratory is a significant barrier to cycling in Chichester – to get in and out of the city centre from the north, this roundabout has to be used. And it also has a safety problem – despite its innate hostility obviously suppressing cycling, there have been six serious cycling injuries in the last nine years.

So this is a shambles. Frankly, the money has been wasted.

Here’s the video West Sussex have produced to publicise the repainting of the cycle lanes, and the new flashing signs.

The basic problem here is that the existing design for cycling is dire, and it isn’t being changed. The crap cycle lanes are being repainted, and the flashing signs smack of desperation, an attempt to mitigate the inherent flaws in the road layout (although, as we’ll see below, the signs appear to have arrived with an earlier, and even more hazardous, version of this scheme that has been abandoned).

As a Chichester local told me –

By definition if you need to have such signs, surely this means you haven’t designed your roads properly for cyclists.

It should be noted that there are already signs at Northgate gyratory – signs that aren’t electronic.

I doubt flashing signs will do much to address the risks for people cycling at this gyratory, any more than the existing metal ones do anything.

The problems are the result of poor design, on both entry and exit to the roundabout.

On entry, drivers will not be looking in the direction cyclists are coming from, which is almost from behind them. Their attention will be focused instead on the roundabout, looking for gaps in motor traffic.

This problem is compounded by ‘masking’. Even if drivers are looking in these two different directions, those in the nearside lane will often have their visibility of the cycle lane obscured by motor vehicles in the outer lane.

To repeat, this design is not being changed. Just repainted.

The blue arrows represent a driver and a cyclist. At the positions pictured, neither has a clue what the other is going to do – stay on the roundabout, or exit it. That uncertainty is a recipe for collisions.

Safely navigating this cycle lane involves looking back over your shoulder, through  180°, in an attempt to observe what motor traffic behind you is doing.

Conveniently this is even demonstrated in West Sussex’s video.

Again, to repeat, this design is not being changed. Just repainted.

A recipe for collisions.

The problems described here are the kinds of problems that need to be resolved, yet won’t be. People cycling are not in visible positions, and when they are, there’s uncertainty about who is going in which direction.

Another local, Paul Wreyford, has this to say in the road.cc article on the gyratory plans –

The cycle lane design remains very similar to the existing layout. There still remains the danger and conflict that I and many of my neighbours have experienced on this system.

This is; the high speed of exiting traffic at each junction, the lack of visibility for the kerbside driver when two vehicles are at a two lane entry, the failure of drivers to signal when exiting, and the lack of lane discipline/lane markings on the gyratory system.

I’d also add that even relying on drivers signalling their intentions to exit (or stay on) the roundabout, is simply not good enough, because if someone doesn’t signal, or signals in error, and their intentions are (mistakenly) assumed, the consequences would be catastrophic.

The black car isn’t signalling an intention to exit. Staying on the roundabout?

So there is a series of clear, identifiable safety problems, that are a direct consequence of the existing design, which is merely being repainted. The issue is not a general lack of ‘awareness’ of cyclists – awareness that needs to be ‘raised’ by a number of flashing signs -as the video and the poster imply.

Pay attention! That’ll do it.

Imagining that the remedy to the collision record of Northgate is ‘taking care’ or ‘paying attention’ represents a spectacular misdiagnosis of the actual underlying problem with the gyratory – crap design.

Here’s a video I’ve taken showing one of the exit points of the gyratory, in the south-west corner.

The video essentially speaks for itself, but a few things can be observed.

An extra insult is how the poor existing road markings – needless ‘Give Ways’ for people simply leaving the roundabout by bike, like these –

Are just being repainted, without any apparent thought about whether they are even necessary.

Sensible advice would be to avoid these cycle lanes entirely, if you feel confident enough to do so, and to cycle with motor traffic on the roundabout, to minimise the problems of intervisibility described here. That’s a pretty dire state of affairs considering this is supposed to be a six-figure ‘improvement’.

But it could have been even worse. The initial plans from West Sussex for this gyratory proposed giving cycling priority on both entry and exit. 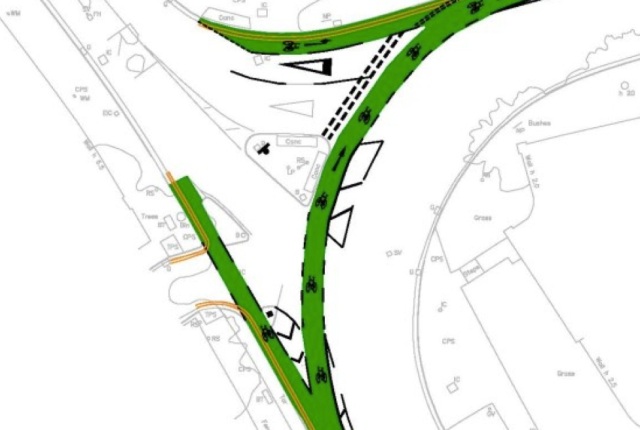 This was really a dreadful idea, given all the aforementioned problems of uncertainty.

There’s certainly nothing wrong with giving cycling priority over motor traffic, but not with this kind of geometry, and with these kinds of speeds on exit. The flashing warning ‘Think Bike!’ signs were included as part of this scheme, again presumably in an attempt to make it slightly less lethal.

But this ‘priority with paint’ design appears to have been abandoned following a road safety audit, leaving us with the status quo. Plus the signs.

Unfortunately, I suspect that simply wasn’t enough money in the first place to come up with a serious, design-led solution to the issues with this roundabout, drawing on best international practice in designing cycling infrastructure that is safe and attractive to use.

There’s plenty of space at Northgate for a major redesign, accommodating cycling infrastructure of the type seen in David Hembrow’s video above, and described in his blog post here. But the aimless result we’ve ended up with has probably flowed from that initial problem of insufficient cash. Northgate needs a major physical redesign, and £210,000 was never going to be enough.

Maybe West Sussex weren’t ever that interested in examining serious alternative designs, or in devoting a large chunk of the money they won from the DfT on implementing one scheme, preferring instead to spread it thinly on a large number of schemes that look good, presented as a nice long list, but which are ineffective in practice.

Meanwhile the old paint is being scraped off, ready for new paint.

21 Responses to West Sussex and LSTF money – the Northgate gyratory