Posted on June 9, 2015 by aseasyasriding

The Head of Transport at the Institute of Economic Affairs, Richard Wellings, had this to say recently –

@rgwarner @veloevol In my view Advanced Stop Lines for cyclists should be removed to make more efficient use of road space.

Wellings completed a PhD in transport and environmental policy at the LSE.

I am absolutely no fan of the Advanced Stop Line, or ASL, but the argument that they should be removed to make for ‘more efficient use of road space’ – i.e. space for one more car in a length-wise direction – disintegrates rapidly under inspection.

One of the reasons why ASLs at junctions are so ubiquitous in Britain is that they have a negligible effect on motor traffic capacity, or indeed even a beneficial effect, assuming that the number of cyclists remains the same in scenarios with and without an ASL.

A TRL study on this topic (Wall et al 2003) found that in practice, sites given an ASL plus nearside feeder lane tended to see a slight increase in motor traffic throughput, as long as no motor vehicle lanes were removed. For those seeking to ‘balance all modes’, this is a free gift – extra space for cyclists without taking away space for motor vehicles.

The result is perhaps not surprising. If cyclists are more easily able to reach the ASL during red phases, they can quickly move out of the way of motor traffic, whereas if – as without an ASL – they’re distributed more randomly in the traffic queue, as they are less able to reach the front, the resulting delays to cars may in fact be slightly greater.

So Wellings’ argument is wrong even in its own terms – removing ASLs would actually likely worsen the efficiency of junctions with status quo mode share. Those ten people sitting on bikes in the ASL – apparently ‘inefficiently’ – would instead be dispersed at random amongst the queue of motor traffic, effectively taking up more space, and being more like, well, motor vehicles, rather than being released in one quick burst at the head of the queue.

But much more importantly, Wellings’ argument is also wrong from the perspective of a simple analysis of efficient use of road space. In this now widely-shared picture of the junction on Theobalds Road in London, there are 27 people on bikes taking up space that could be occupied by three cars, at most. 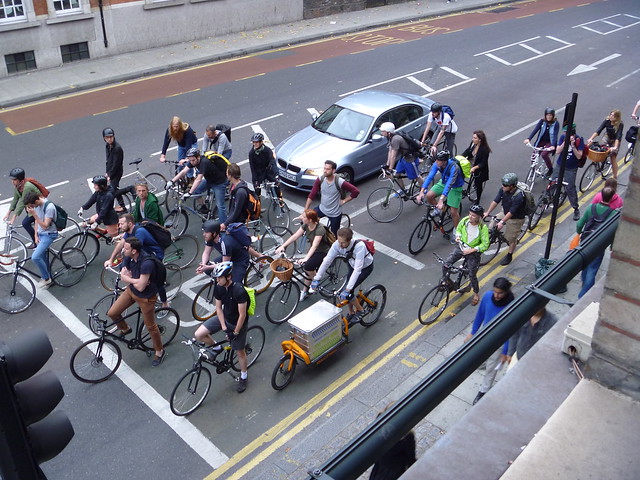 3 cars, or 27 bikes – what’s more efficient at shifting people, bearing in mind that average car occupancy in England is 1.5 people?

To take another way of looking at this (moving away from the dreaded ASL) – at this Dutch junction, there are ten people using the cycle infrastructure on the left.

Would the occupants of those cars on the right hand side of the picture prefer to be 5-10 cars further back in the queue? Is that what ‘efficiency’ means?

I suspect part of Wellings’ problem here – and it is a broader problem with transport planning across Britain – is an inability to see cycling as a viable, serious mode of transport, that can function as an alternative to the car.

This perspective – perhaps we can call it the Wellings Perspective – sees cycling as some kind of minor annoyance on the existing road system, an annoyance it would probably be good to get rid of altogether. From the Wellings Perspective, ‘Cyclists’ are seen either as people who can’t afford cars (and who should be walking or getting the bus instead), or as leisure users, clogging up the network while engaging in their hobby. Of course, children cycle too, but we can tolerate them bimbling about on the pavement while their parents walk behind them.

Back in the real world, making changes to the road network that will enable many people to cycle instead of using cars for short trips, therefore freeing up space on the road network for all users, is simple good policy, that is now being grasped by Transport for London as well as by government ministers (and by implication the DfT itself) –

I know one of the common complaint is that there simply isn’t enough space available on our roads for cycling infrastructure.

My response is that there simply isn’t enough room not to put it into place.

But from the Wellings Perspective, these kinds of changes make no sense, because they involve impeding serious, actual transport – i.e. cars – for the sake of a few weirdos and hobbyists.

Motorists face even more delays as Dutch roundabouts, which give cyclists priority, set to be introduced in London: http://t.co/z3qsMhau6K

The Wellings Perspective is apparently unable to grasp that ‘a cyclist’ isn’t some ‘extra’ problem on the road network, that has to somehow be fitted in around drivers (or better yet eradicated altogether). Instead ‘a cyclist’ is someone who could have been driving instead.

To take just one concrete example.

All these children cycling and walking home from primary schools across a main road in the Dutch city of Assen – literally, hundreds of them – could be framed as ‘a delay to motorists’, because they’re holding them up as they cross the road. But in reality, due to the fact that they are walking and cycling home, rather than being ferried by car and therefore adding more motorists onto the road network, they are reducing delay to motorists.

This is so simple I can’t quite believe I’ve had to type it – but there you go. Sometimes things have to be explained to ‘Heads of Transport’ at economic think tanks.

This brings me to something Rachel Aldred has also written – in this case, about cars on the road network as ‘positional goods’ –

There are many items that are what economists call ‘positional goods’ – a key benefit of the object is derived from having something that others don’t, something that is either physically or socially scarce. Fashion largely works on this basis. The opposite is the Internet. If I have the Internet, and virtually no one else does, it’s rubbish – the benefit of the Internet comes from everyone using – and often, contributing to – it. But if I buy a new and expensive pair of shoes, and see many other people wearing them, I’m not going to be happy. Part of what I’m paying for is the hope that you don’t have the shoes.

But motor vehicles take positional goods to a new level. Having a new pair of shoes doesn’t entitle me to kick others off the street. Cars, on the other hand, marginalise non-users not just socially but also physically.

As Rachel goes on to explain, it was the car as a positional good that essentially caused a collapse in cycling levels in Britain. Previously quiet lanes, streets and roads on which most people could happily cycle became increasingly hostile as the use of cars spread, too hostile for these ordinary people, leaving the tiny hardened minority willing to continue cycling on the motor traffic-dominated road network.

But there is another obvious aspect to the car as a positional good. Car driving is attractive in relation to the number of other people who are not engaging in it. Here’s a definition lifted from, err, the Institute of Economic Affairs –

Positional goods… have a peculiar property: the utility their consumers derive from them is inversely related to the number of people who can access them.

Driving is not much fun when everyone else is doing it.

By contrast, the early days of motoring must have been glorious by comparison – roads relatively free from other motorists, in the most part.

What I am driving at here (excuse the pun) is that the quality of the driving experience actually depends on large numbers of people not driving. One might even go so far as to say that the urban motorist is to some extent a freeloader; his or her driving convenience is actually purchased thanks to other people’s willingness to walk, to cycle, or to take public transport – often in less than ideal, or hostile, British conditions.

Drivers don’t even have to be moving – precisely the same logic applies to high-street parking. Setting aside the fact that this will involve the use of street space that could be allocated to walking, seating, dining, (or bus lanes or cycling infrastructure), the ready availability of on-street parking again depends upon other people not using it to access high street shops and services. That empty space is only there because of those people walking or cycling past it.

An empty car parking space on a high street in Utrecht, behind people accessing shops and services by bike and on foot. Note also the huge numbers of parked bicycles here. Every single one represents less pressure on a car parking space.

Noisy, dangerous, unpleasant, and hostile streets and roads that are confusing and awkward to navigate – even for motorists – are a natural consequence of futile attempts to accommodate more and more driving and parking, and a failure to realise that sensible transport policy relies upon enabling and prioritising the most space-efficient modes, for the benefit of all, including those using the least space-efficent.

We arrived in this position, I suspect, largely through ‘boiling a frog‘ – streets that had always been open to all became increasingly colonised by motor traffic, but at such a gradual pace few thought to stop and question what the actual end point was going to be, and at a time when the answer to streets becoming clogged was to devote more and more urban space to the mode of transport that was causing the problem.

Is this use of road space (indeed, of urban space in our town centres) a sensible way of moving people around for trips of under 2-3 miles?

The outcomes could be so much better for everyone, drivers included, if we stopped focusing on ‘cyclists’ as some kind of impediment to motoring, and instead realised that cycling should be a serious mode of transport like any other, and should be developed as a safe and attractive alternative for those people driving.

Prioritising such an efficient mode of transport would free up time and space on the road network for those travelling around in cars.

Perversely it might even restore some of motoring’s positional value.