A few months ago I commented on the new Waitrose/John Lewis retail site in Horsham, principally in relation to the way the visualisations of the (then yet to be opened) new development ducked the problematic issue of a very busy road severing the site from the town centre, but also on the potential difficulties of getting to the site by bike and on foot.

Now that the site is open, it is quite obvious that, yes, walking and cycling have been completely failed by the planning process. As I hope to explain here, cycling to Waitrose and John Lewis is effectively impossible, except for those who want to cycle (illegally) on footways, or for the tiny minority of people who are prepared to ‘negotiate’ with motor traffic on a dual carriageway carrying 20-25,000 vehicles per day.

To set the scene, here’s a video I’ve made showing the ‘legal’ cycling route to Waitrose.

To repeat some of the points made in the video – this isn’t an ‘out of town’ site, it is just outside the town centre, separated from it by the road I am cycling on. The route shown in the video is the one that will have to be taken by the vast majority of people who live in Horsham if they want to legally cycle to Waitrose – only a small proportion of the town’s population live in the ‘opposing’ direction, and they too will have to cycle on this dual carriageway, as this is the only access for the supermarket.

There is heavy traffic in the video which actually makes the experience of cycling to the store slightly less hostile, principally because of reduced vehicle speeds. At less busy times, moving out into the outside lane (as I do in the video) is much less easy because motor traffic will be travelling at or above 30mph.

The video also shows someone cycling on the footway, from the supermarket. This isn’t legal (and I don’t think it should be – the footways, as currently designed, are too narrow). But it is exceptionally common. People want to cycle to Waitrose, but faced with the choice between a four lane, high speed, high traffic road, and trundling on the pavement, people are unsurprisingly opting for the latter. 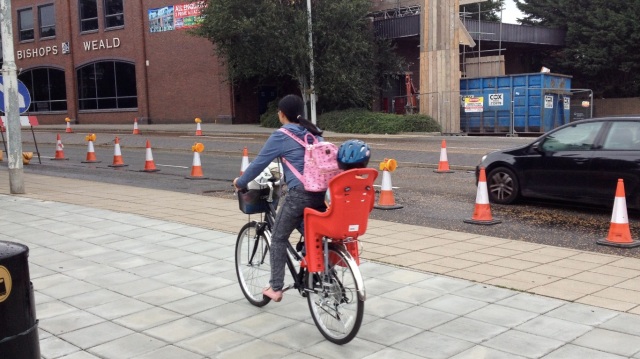 Cycling has been squeezed out on these kinds of roads for decades, and this new development has done nothing to address this root problem. The only silver lining on the cloud here is that, in undoubtedly attracting more ‘ordinary’ people on bikes to find their way along this road to the supermarket, the problem is now increasingly visible and less easy to ignore.

My video also shows the stupidity of planning entirely around motor traffic – from start to end of the video, my trip is only around 300m as the crow flies, but it takes me three minutes to cover this distance, in large part because to even get to the front door by bike (which is where people cycling should be going) I have to go out of my way to a roundabout, and then negotiate my way through two levels of a car park. There is no direct access to the front door by bike.

Some amazing open goals have also been missed here – whether by Waitrose themselves, or by council officers, or both.  Mainly, there are no access points into the site from the surrounding area, only the road I cycle on in the video. This is incredibly frustrating.

Standing in front of the main entrance, it is quite easy to see the main road to the north. The silver car is travelling along this road, and the white building is on the far side. It is a distance of only 80 metres or so from where I am standing.

But there is no walking (or cycling access from here – instead, you have to go take the long way round, the motor traffic route. I’ve marked this obvious (missing) connection on the visualisation of the site – the red line. 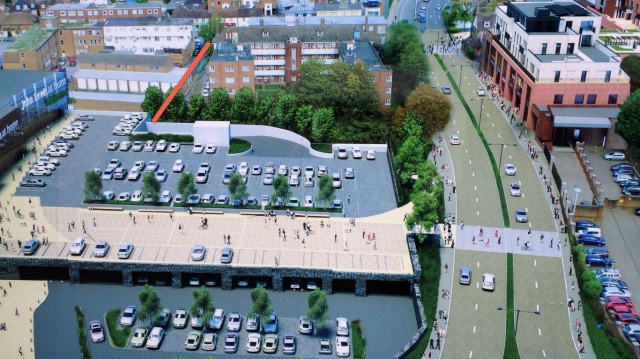 This is looking north, across the site, to the road running east-west (left-right). But there is no connection through to the west, either – a housing estate clearly visible, and a passage there to the side of the supermarket, but… fenced off.

This missing connection would run here – again, marked in red.

Again, the absence of this connection means a walk of a few metres is converted into one of several hundred.

Nor is there access at the south-west of the site. The development looms behind the housing here (circled) but again, no direct access, no connection with an existing path running along the river.

The overall impression is of a development that has been plonked down, with no thought or consideration, no attempt to connect it up sympathetically with the surrounding area, by foot or by bike. 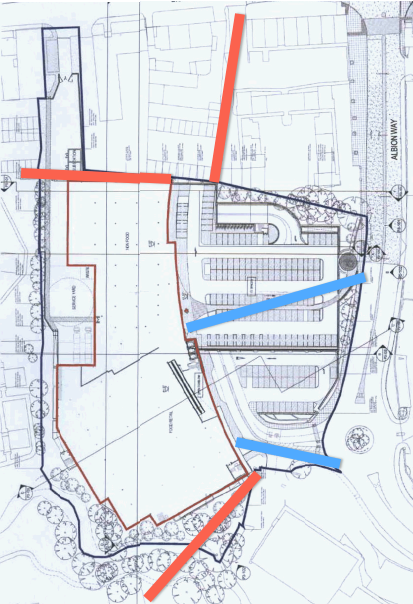 The three missing connections described here, in red – with the only existing access (from the major road) marked in blue

Anyone living to the south, west, or north of this site has to go some distance out of their way to get to it. Combined with the hostility of the road you are forced to walk along, or cycle on, this development has entrenched, indeed worsened, car dependence within the town, which is pretty appalling given that this was a blank slate, in 2014.

The final insult – useless bike parking, which is (of course) placed as far away from the entrance as possible