Posted on October 6, 2015 by aseasyasriding

Underpasses have a pretty dreadful reputation in Britain; a reputation so dreadful that councils, planners, developers and highway engineers can point to public attitudes and say ‘people don’t like underpasses! Why should we provide them?’

But – just as with cycling infrastructure in general – poor implementation of a particular concept doesn’t mean that concept itself should be ruled entirely. Britain has, in recent history, built a great deal of pretty awful attempts at protected cycleways on main roads, but that doesn’t mean protected cycleways aren’t a very good idea, if they are implemented properly.

And precisely the same is true for underpasses. All too often British underpasses are murky, poorly lit, prone to flooding, inconvenient, socially unsafe – or all of the above.

These are the kinds of pictures developers and councils use to argue that pedestrians (and people cycling) prefer at-grade crossings – crossings at surface level, where motor traffic has to be dealt with at signalised crossings (or just by dashing across the road).

‘At grade’ crossings are generally more attractive to pedestrians and cyclists due to reduced distances and the avoidance of ramps or stairs, so are the preferred solution.

However, if the road being crossed is a major through-road, or a very busy distributor road, typically with high motor traffic speeds, then I would argue that underpasses (and to a lesser extent bridges), rather than surface crossings, are actually essential.

For a start, failing to provide an underpass doesn’t magically address the severance problem presented by the road. It still has to be crossed, and that will be much more inconvenient with a series of signalised crossings, which will introduce delay (how much delay depends on the number of crossings and the willingness of the highway authority to allocate time to walking and cycling across busy roads).

Underpasses present no delay whatsoever – as they are totally separate from the road system, they can be cycled (and walked) through with impunity.

Likewise underpasses present none of the safety issues that might arise with an at-grade crossing, particularly the temptation to dash across the road if (as is most likely) there is considerable delay waiting for a green signal to cross.

And underpasses do not have to look like the dirty and grimy British examples presented here. They can be light, airy and well-lit.

This same underpass is also surrounded by housing, is open, and overlooked – it feels like it is connected to the neighbourhood, ensuring high levels of social safety.

So, in short, the problems with ‘British’ underpasses are not innate problems with underpasses in general. With care and effort (and expenditure!) underpasses can be genuinely attractive and safe, particularly because they do not involve interactions with motor traffic on the fast and busy road that would have to be crossed at surface level. 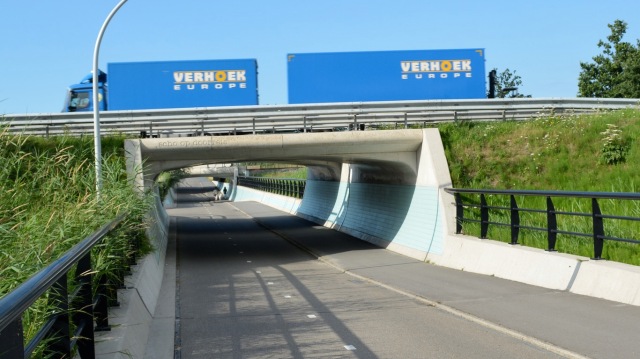 And underpasses can also be used strategically to privilege walking and cycling, by creating direct routes that simply don’t exist for motor traffic. The underpass that features in these three photographs here is a brilliant example. It forms part of a dead straight desire line, connecting the centre of one new development with the centre of another, crossing a four carriageway N-road (the equivalent of a British A-road), a railway and a service road.

This route does not exist for motor traffic, which has to go the long way round, using the N-road (a through-road) that the underpass itself passes under.

The underpass lies along the red line. Motor traffic obviously cannot use this underpass; the best available route is illustrated in blue.

Underpasses can obviously be poorly designed, and placed in locations where the priority should be to create an attractive surface environment, with reduced motor traffic levels – particularly within urban areas.

But that should not blind us to the fact that they can and should be used strategically as part of safe, convenient routes for walking and cycling, where major roads that are in the right places (bypasses, for instance) have to be crossed, providing direct routes for these modes that don’t exist for driving.

22 Responses to Rehabilitating the underpass