Living in a high-visibility world

Posted on December 1, 2015 by aseasyasriding

I recently rediscovered this sensible Telegraph article about cycling safety from earlier this year. It contains (amongst some useful statistics and comments, particularly from Rachel Aldred) this little anecdote –

There was a hope that the sheer weight of cyclists on the roads would force both drivers and local authorities to create a safer environment. But this has not happened.

One who knows to his cost is John Whiteley, 71, who has been cycling seriously for 55 years – much of it in the dramatic hills surrounding his Halifax home.

On January 2 this year, a clear day, he was out with a friend for a pleasure ride on the B6118, a country road that runs around Huddersfield up to the Emley Moor television aerial. As usual, he was wearing his fluorescent orange vest.

“It was about midday. And this Volvo estate came up from behind and the corner of his car hit me.” The impact broke his leg, and he went flying into the grass verge, spraining his ankle into the bargain.

A high visibility jacket in this instance was obviously useless; it failed to deal with the basic problem of a driver who either wasn’t looking, or who failed to overtake with sufficient clearance, at midday, on a bright, clear day.

Likewise it is unlikely that painting yellow stripes on Dartmoor ponies, and cows in the Cotswolds, will make the slightest bit of difference to the rate at which these animals are being killed by drivers.

Bloody hell, this new Chris Morris' Jam is even more surreal than the old stuff. pic.twitter.com/6bPLm49ZCh

An earlier trial of reflective collars on cows in Gloucestershire apparently failed to stop road deaths; this has apparently prompted the shift to reflective paint, an idea that seems to have started in Finland, in an attempt to prevent reindeer deaths. 4,000 reindeer are killed every year on Finland’s roads.

A cursory search hasn’t revealed any news on whether these trials of reflective paint on Finnish reindeers have had any effect on the death rate. But that hasn’t stopped Volvo essentially borrowing this reflective paint and promoting it as a cycling safety product – ‘Life Paint’.

Life Paint is the brainchild of spin-doctors, not safety engineers.UK-based Grey London, Volvo’s global creative agency, spent a year developing the Life Paint idea. The paint comes from Swedish startup Albedo100. Prior to supplying its product to Volvo, Albedo100 made headlines by spraying its reflective product on Finnish reindeer, up to 4,000 of which reportedly die in traffic accidents ever year.

“Our job isn’t just to advertise our clients,” Grey London chairman Nils Leonard told Adweek regarding the Life Paint project. “It’s to help them make a positive impact on culture.”

Grey London—and its army of 30-plus people working on the campaign—moved the needle in a way that seat-belt technology and additional airbags don’t. Web stories ahead of free giveaways of a neat product help create real commotion and awareness about a serious, avoidable safety issue for cyclists: visibility.

There’s no evidence of effectiveness; Life Paint is explicitly a marketing gimmick that simultaneously allows Volvo to pretend it cares about ‘safety’ while simultaneously shifting the onus of responsibility onto the people that are being hit, and away from the people doing the hitting, all wrapped up in the issue of ‘visibility’.

What scientific evidence that does actually exist on the effectiveness of high-visibility clothing is mixed, patchy or non-existent. A 2006 Cochrane review found that, while it may improve driver detection during the day,

In other words, it is not established whether simply being ‘more visible’ makes any difference to whether you actually end up being hit.

Wearing visible clothing or a helmet, or having more cycling experience did not reduce the risk of being involved in an accident. Better cyclist-driver awareness and more interaction between car driver and cyclists, and well maintained bicycle-specific infrastructure should improve bicycle safety.

Hi-visibility clothing seems like an obvious safety intervention, but there doesn’t appear to be any evidence that it makes a significant difference at the population level. With more and more people, animals and objects now apparently ripe targets for hi-visibility clothing or paint, this satirical article from 2007 comes ever closer to being reality.

Cyclists in Milton Keynes have reacted angrily to a decision by town planners to make buildings, trees, street furniture and the road itself much easier to see by painting them all luminous green.

… Cars, lorries and pedestrians will also be compelled to be repainted in high-visibility luminous yellow paint while cats, squirrels and urban foxes will also be made more visible, following a study that a number of accidents are caused by drivers swerving to avoid badly lit mammals that have strayed onto the highway. 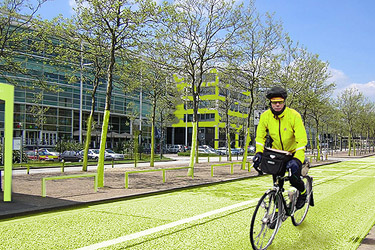 But local cyclists are furious at the plan that has made them the same colour as their immediate surroundings. ‘We’ve all spent a fortune on these luminous jackets, trousers and cycle clips’ said local cyclist Mark Randle. ‘Suddenly our hi-visibility cycling gear has turned into the most effective camouflage available. Now we’re completely invisible.’

But a cycle shop in the town is cashing in on the crisis by advertising ‘normal clothes’ for cyclists to make them stand out.

38 Responses to Living in a high-visibility world