The role for surfacing in rural areas

Posted on January 29, 2016 by aseasyasriding

I think I covered most of these objections in that previous (long-ish) post, but it’s probably worth clarifying here exactly what types of routes should be surfaced properly, and which ones shouldn’t be, because I obviously don’t think all rural paths should have a smooth tarmac surface, and I also think people should have fun places to ride mountain bikes (guess what – I have a mountain bike myself).

The distinction is between routes that some have kind of utility function, and those that are pure leisure routes.

What do I mean by this? Perhaps the best way to describe it would be that utility cycling involves using cycling as a tool, a means to get from one place to another, to perform activities unrelated to cycling. By contrast, leisure cycling means that riding a bike itself is the goal.

An example of a utility route would be a path that connects a village directly with the nearest town. This kind of path would be used by people doing shopping by bike, instead of by car, or by kids cycling to school, instead of being driven. It might, alternatively, be a path between an industrial estate on a ring road, and a town centre, or a new housing estate and a shopping centre. I’m sure there are countless other examples, but the essential point is that these are routes that will be used by people for whom cycling is a means to an end (getting from A to B) rather than as an activity, in and of itself.

Leisure routes don’t fit into this category – they are routes that might not go from anywhere in particular to anywhere else in particular. They might, for instance, arbitrarily join up between two country lanes, or wind through a forest. Or – to pick a really obvious example – they might wind along a mountainside ridge. Somewhere people will only be riding for ‘leisure’, and certainly not for ‘utility’.

Now of course utility routes will obviously also serve a ‘leisure’ function, because they will inevitably connect up with ‘leisure’ paths, and riding a bike is, in and of itself, fun. People will ride along paths that are utility routes simply for the pleasure of riding a bike, in just the same way that they will ride along roads for fun, roads that have a ‘utility’ function. And likewise people performing tasks by bike will also be engaging in leisure cycling when they do so – these are not hard and fast categories.

These might be utility trips, or leisure trips – or a bit of both.

The essential point, however, is that a route that has an obvious utility function should be designed for utility, even if it is used by people for leisure.

So a path that forms a direct connection between two towns, or two large villages, should be designed in a way that allows people to get from A to B along it without having to dress up in special cycling clothes, or without buying a special all-terrain mobility scooter (which someone seriously suggested in the comments below my last piece). These kinds of paths should be designed for the destinations at either end of it. Utility should trump leisure, even if the path in question is currently a muddy bog that people enjoy using on mountain bikes. We don’t design roads between villages and towns like this – 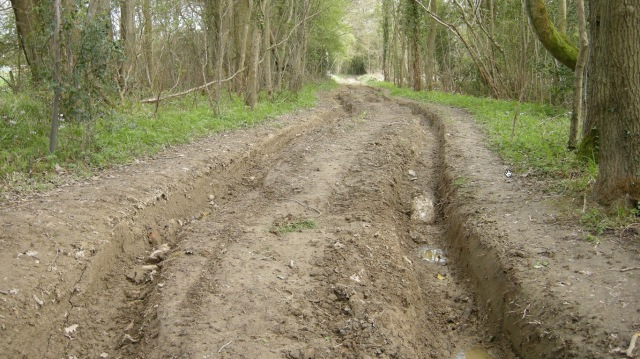 simply because people who own Landrovers enjoy mudplugging along them. We design them to allow people to drive from A to B along them without even thinking about buying a special car, or taking special clothes and equipment with them in case they need to dig their car out of some deep mud.

If you don’t think utility routes should be surfaced properly, that is precisely what you are demanding of other people. That they should get overalls and wellies on, and hose off their bikes afterwards (assuming they have a mountain bike in the first place), just to go the library, or visit the doctor, or go to school, or get to the train station. Or that they should somehow drive around the supermarket in a mobility scooter covered in crud.

These are all hypotheticals, of course, because it’s pretty much inevitable that these people won’t be cycling at all, even if they wanted to. That’s the outcome. Imagine this mother cycling like this –

She simply won’t be there – she’s not going to go and buy and mountain bike, wellies and overalls. She’ll be in the car instead.

Although it might not be obvious, the path in the photo above is a screamingly obvious utility route. It’s an old railway line that connects a series of towns and villages, and used to join the (still-existing) mainline railway to London.

Partridge Green, which is at the southern end of the section I’ve marked, has a population of around 3,000 people, and (of course) used to have a railway station. Likewise, Southwater, roughly where the white box is, has a population of over 10,000 people, and no railway station. From Southwater to the railway station at Christ’s Hospital (an hour from London, and a settlement in its own right) is around 2 miles, a flat, easy trip by bike, with minimal interaction with motor traffic. 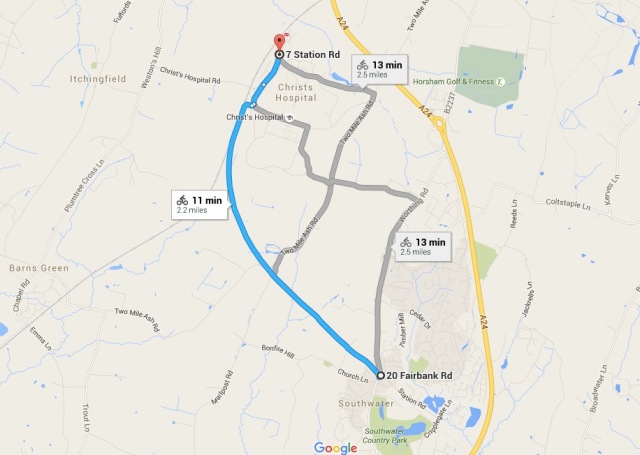 Perfect for commuters, families going for a day out by train, people visiting the leisure facilities at Christ’s Hospital, and vice versa. Except the route looks like this.

Now to repeat, that doesn’t mean all paths in rural areas should be surfaced in this way. The Netherlands does not do this. There are paths all over the place, winding through forests across downland, alongside beaches, through fields, which are perfect for charging around on, with mountain bikes or cyclocross bikes. 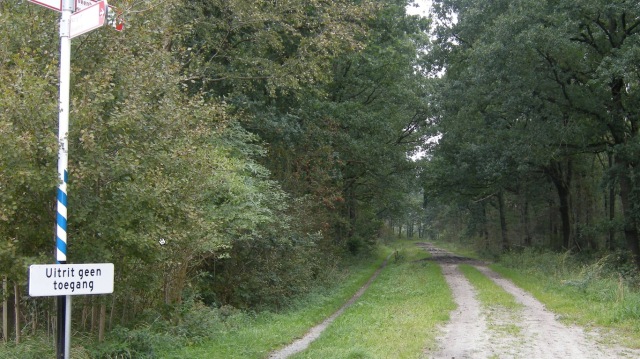 These are the paths that don’t really go anywhere, or that have a very good parallel alternative in ‘utility’ form. Often these leisure routes will have an asphalt path in parallel.

To be clear however, these are not ‘utility routes’, or part of any region’s cycle network. The asphalt strip simply allows people on ‘ordinary’ bikes (and indeed on mobility scooters, and other types of cycles) to use these some of these leisure routes, alongside mountain bikers.

The overall point is that the Netherlands has not ‘lost’ anything by surfacing utility routes properly. The extensive leisure route network sits alongside the main utility network, and the distinction between the two is not blurred. The quality of routes that people need to use to get from A to B is never sacrificed.

Yet in Britain there’s a startling parallel with those tired arguments that claim we don’t need cycling infrastructure in urban areas, because we hardly ever see anyone cycling in urban areas. In precisely the same way, we seem to believe that useful, obvious routes between destinations should continue to effectively deter almost the entirety of their potential users, simply because that route is dominated by the type of cycling that its current state will only ever allow.

35 Responses to The role for surfacing in rural areas