Posted on March 2, 2016 by aseasyasriding

What does ‘mass cycling’ mean?

It doesn’t mean everyone has to cycle, for every single trip. It’s worth bearing in mind that, even in the Netherlands, where cycling is a universal mode of transport, cycling only accounts for 27% of all trips the Dutch make. The Dutch drive, they catch buses, trains, trams, and walk, just as much as we do. Car ownership levels are very similar to Britain; the train network is extensive and efficient; and it’s easy to walk around.

These are all ‘mass’ forms of transport here, just as they are there. The difference is that, for the Dutch, cycling is essentially an optional extra that they are able to take advantage of. That 27% figure represents the proportion of all trips that cycling makes sense for. The Dutch will only choose cycling when it is the best option, not because they have any kind of innate attachment to the bike, or because they are ‘cyclists’. They have cars, and use them when they make sense; likewise they will cycle or walk, when that makes sense.

Cycling in the paradise of Houten. But there is plenty of car parking for the residents here; and they will use cars when they make sense.

So ‘mass cycling’ simply means that everyone has the option to cycle, for any given trip, in much the same way that walking, driving and public transport are already available. It is about having transport choice; a better range of transport options to pick from.

Public transport, walking and cycling on one street in Utrecht. The Dutch are free to choose the mode of transport that suits their needs for a given journey.

I think this is often lost in debates about cycling, particularly in the way we refer to ‘cyclists’ and ‘motorists’ almost as distinct categories, and present binary oppositions like ‘bikes vs cars’. This is something that both cycling campaigners do, and opponents of designing for cycling, who are all too happy to point that people can’t cycle for every single trip, or that cycling isn’t a universal solution. It is deeply unhelpful – it creates the impression that to be ‘a cyclist’ you must cease to be ‘a motorist’, and vice versa.

Building cycling infrastructure isn’t about forcing everyone to be ‘a cyclist’, but about creating another transport option for people to get around, alongside walking, driving and public transport. Doing so reduces pressure on the road network for people who are driving; the same people who might be cycling for a different trip.

The problem in Britain is that this beneficial extra option simply isn’t available to most people, because of the hostility of road conditions. Cycling just isn’t a practical or easy mode of transport for the vast majority of Britons. 79% of British women never cycle.

The elderly man in the photograph below is cycling into the city of Delft, from a village about three miles away.

He could get public transport; he could drive. He has chosen to cycle, however. This isn’t an option available to his equivalent in Britain, because thunderous main roads, with HGVs travelling at 80km/h along them, do not have this kind of separated provision alongside them.

In Assen, children cycle to and from primary school in huge numbers, rather than relying on their parents to ferry them to and fro at the start and end of the day. 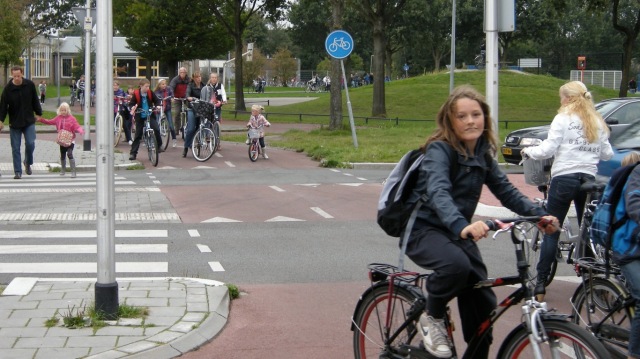 It’s so easy to do this that these children are actually heading home for lunch; cycling provides an extra amount of flexibility into the daily routine. Parents would have to make six driving trips every day without the presence of cycling infrastructure that allows their children to cycle independently.

Likewise teenagers can get around to after school activities, completely independently – for instance, hockey practice.

Obviously their parents could choose to drive them, but cycling creates more flexibility. Stand around in any Dutch town or city at around 4pm and you will see children and teenagers cycling around in all directions, heading off to sport, music practice, leisure, visiting their friends, all completely independently.

There is no parents’ ‘taxi service’. Children just get about by themselves, because it is easy and safe to do so. This stands in stark contrast to the situation in Britain, where over 50% of trips British children make are in cars – being driven! This is a tremendous waste of effort.

And for adults who might well have driven to and from work during the day, cycling represents a wonderful way to get in and out of town in the evening, without worrying about parking, or having a drink. Bars and restaurants in Dutch towns and cities are surrounded by swathes of bicycles of an evening; people who have driven through the day, and yet chose to cycle here in the evening, because it is their best option for a night out. 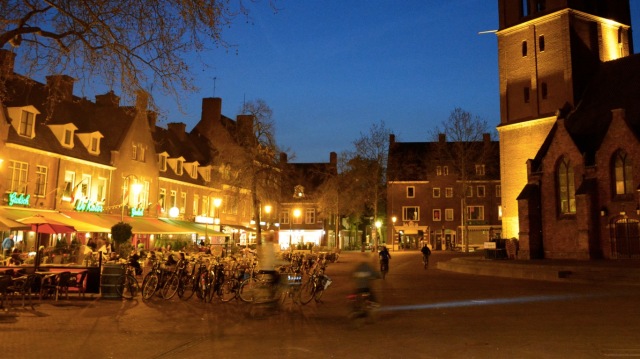 Cycling is also perfect in combination with other modes of transport in the Netherlands – it’s easy to get to train stations and find parking spots, without worrying about delays caused by congestion or having to rely on other people for a lift. 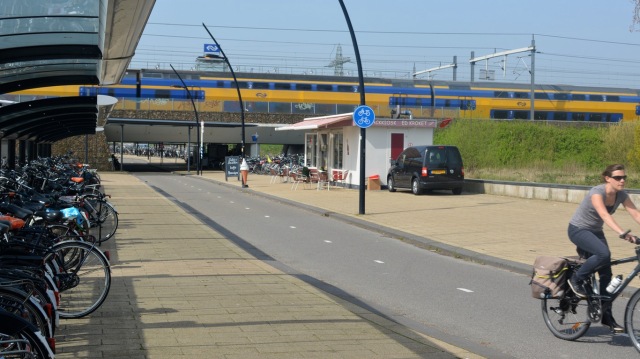 And in general the bicycle is a fantastic way to make short trips if you don’t want to have to worry about congestion or delay on the road, or paying for petrol, or finding a convenient parking spot, or hurrying back before ticket runs out. It’s the ultimate in reliability.

But, crucially, this flexibility is in addition to other modes of transport, not as a replacement for them. Mass cycling is about making life easier, creating conditions that allow everyone the freedom to choose a practical mode of transport, when it suits them. It most certainly isn’t about converting everyone into a ‘cyclist’ or expecting them to cycle for every single trip. It’s about choice.