One particularly puzzling aspect of attitudes to cycling in Britain is how this simple mode of transport is seen (or misrepresented) as being elitist, or exclusive, in some way, shape or form.

Whether it’s the claim that it’s male-dominated, or white, or the preserve of the rich or the middle class, or only for people of a certain age, or only for those who are able-bodied – or a combination of all of the above – these arguments have come to be used to resist changes to the urban environment in favour of cycling, presumably on the basis that those changes favour the rich over the poor, men over women, or whites over ethnic minorities, or able-bodied people over disabled people, or that they are ‘against’ children or the elderly. Witness the protest yesterday in Regents Park, arguing that the park should be kept open ‘for everyone’, rather than having motor traffic removed. 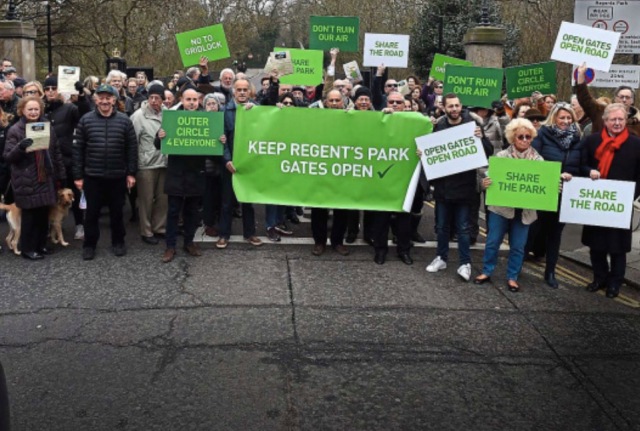 Or a host of comments on the petition organised against Superhighway 11, of which this one by Dan is sadly typical –

What’s going on here? Is there any truth to these claims that cycling is for a privileged minority, and that measures to make cycling an easy way to get about will therefore inevitably harm those less fortunate?

The idea that reallocating road space used by private motor vehicles in favour of cycling (or reducing the routes available to motor traffic) favours the rich and middle classes over the poor is particularly baffling. A quick glance at statistics shows that, in reality, richer people make a greater proportion of their trips by car than those of lower incomes.

From Transport and Poverty

From that same study –

Over 70% of the trips made by the highest income group are by car compared with fewer than 50% by the lowest income group… almost half of those from the poorest quintile do not [even] have access to a car.

And of course car use can be painfully expensive. For those in the lowest income quintile who do own cars, up to a quarter of household income is spent on the cost of motoring.

As for cycling itself, it pales into insignificance as a mode of transport in Britain, but even at these low levels it is pretty clear that it’s evenly distributed across incomes. Yes, richer income groups might make more cycling trips, but that’s only because these groups make more trips overall. For both the lowest and the highest income groups, cycling forms about 1.8% of all trips made. There’s no difference.

This very low level of cycling across all income groups suggests that it is suppressed as a mode of transport by hostile conditions, not by class. Whether you are rich or poor, it’s not much fun to cycle on roads that are uncomfortably full of fast motor traffic. Being rich or middle class doesn’t somehow automatically inoculate you from the basic, rational human fear response that comes from dealing with these kinds of conditions.

Cycling isn’t as cost-free as walking, of course – you have to buy a bike – but my hunch is that cycling share would resemble walking, across income groups, if it was a mode of transport that was ‘environmentally available’ to all. (By that I mean that the environment allows cycling from A to B with relative ease, as much ease as walking or driving.) It would open up transport options for those who can’t afford cars, particularly for those kinds of trips that are awkward, inconvenient, difficult or even impossible without them – the kind of trips that involve walking longer distances, or long waits for unreliable or intermittent (and often expensive) public transport.

The claim that designing for cycling is discriminatory against children or the elderly is equally puzzling. Children under 17 – for obvious reasons – can’t even drive. If they are travelling in cars, they are reliant on their parents, or other adults, ferrying them about, very often for trips that they could be making independently, if the environment was designed to support those kinds of trips. The only way in which cycling is discriminatory against children is if you can’t possibly imagine children cycling around independently. That’s not inevitable; we just need to design the environment to allow it. 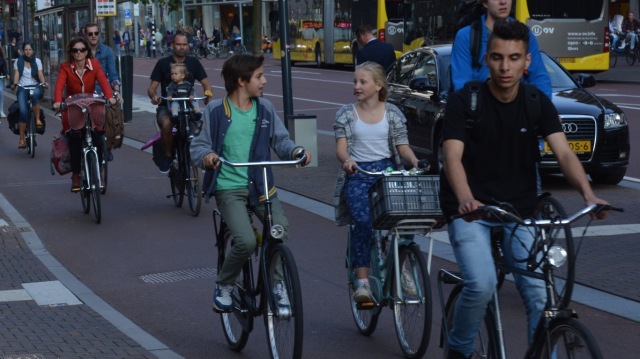 Much the same is true of the elderly. Three of my four grandparents either chose to give up driving, or surrendered their driving licence. They just didn’t feel comfortable driving anymore. Cycling was my grandmother’s remaining way of getting about, until her increasing frailty meant she could no longer cope with the demands of the busy roads where she lived. She didn’t want to stop – she was essentially forced off her bike.

You might think that elderly people can’t possibly ride bikes, because you don’t see many of them doing so. But that doesn’t mean that cycling is inevitably a mode of transport that the elderly can’t use, or don’t want to use. Just like my grandmother, it’s more than likely that road conditions are just too hostile for this age group, even for those who might want to cycle. A bicycle or adapted cycle is an amazing way for elderly people to maintain independence when they don’t have a motor vehicle, or if they start to feel uncertain or uncomfortable using them, as my grandparents did. 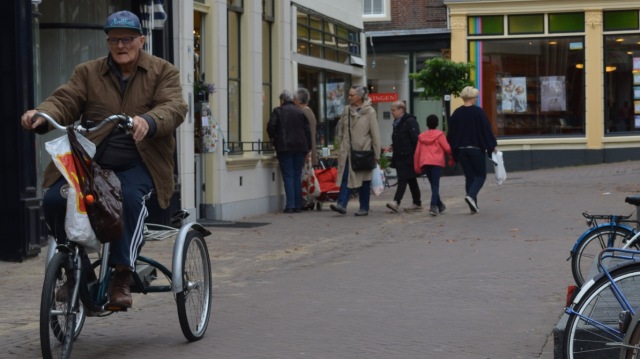 You might not see it, or can’t imagine it happening, but that’s not a very good basis for assuming that the elderly can’t or don’t want to cycle. Especially if you are trying to block schemes that will create conditions which will make cycling a reasonable possibility for those elderly people (and indeed children) who actually want to cycle about.

And – contrary to the blanket assumption that cycling is something that people who have a disability are excluded from – for many people cycling is (or could be) actually a mobility aid, either in the straightforward form of a bicycle itself, or in the form of trikes, handcycles, or adapted wheelchairs. 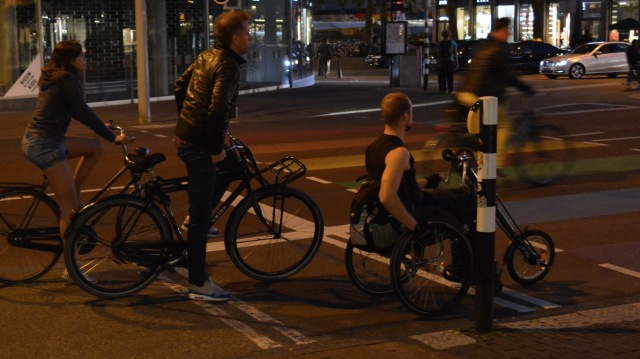 Cycling gives these users independence. All too often the obstacles standing in their way are not problems or issues with cycling per se, but with a road and street environment that makes the choice of cycling difficult or impossible.

This is even before we appreciate that cycling infrastructure represents a better environment for a variety of mobility aids, not just cycles. Even in the early, tentative days of good quality cycling infrastructure emerging on the streets of London, these users are  already starting to appear, taking advantage of what obviously works for them.

Wheelchair user on #CS5 and taxi passing each other peacefully. pic.twitter.com/V872BISQL0

So there I was, enjoying a leisurely drink on #Taviplace, and what do I see? Skaters enjoying the new cycle paths 🙂 pic.twitter.com/7Q0Bjx82jV

What am I getting at here?

That the way cycling is portrayed as ‘exclusive’ is completely back to front. Rather than being a mode of transport for the privileged, the wealthy, and the able-bodied, it’s actually the complete opposite. It’s the great enabler – a mode of transport for everyone, especially for those who have limited transport choices. For those who don’t have access to cars. For those who can’t afford them, or can’t drive them, or choose not to. For those for whom walking is a struggle, and a bicycle makes the simple act of getting from A to B much easier. For those who don’t even use a cycle, but rely on other mobility aids like scooters and wheelchairs.

The terrible irony is that these claims about cycling being a minority pursuit are being used to resist changes to the urban environment that would bring about these benefits, for everyone.

This entry was posted in Cycle Superhighways, Infrastructure, Mobility. Bookmark the permalink.