How to respond to a cycling scheme – an objector’s guide

A while back I wrote a helpful guide for journalists thinking about writing a lazy article about cycling.

In a similar vein – and with so much attention now being focused on new cycling infrastructure, particularly from objectors – I thought it would be similarly constructive to provide some handy hints and tips for people who want to complain about a cycling scheme.

The first step, and perhaps the most important one of all is – don’t bother reading about what’s actually being proposed. Why bother informing yourself? That would waste valuable time, time that could instead be spent moaning, or signing an angry petition, or appearing in the local newspaper with your arms folded. Just respond to what you think is rumoured to be happening. Evidence and facts are for chumps.

If that doesn’t convince you, consider this – engaging with the consultation might lead to you discovering that the proposals you are so angry about don’t actually represent any kind of earth-shattering change. How unsettling would that be!

When you do write something – either on a petition, or on Facebook or Twitter, SCRAWL in CAPITAL letters, seemingly at RANDOM. That’s the best WAY to get YOUR point ACROSS.

Good effort, but more capital letters needed. Try GOING for EVERY other WORD.

You are the expert. Highway engineers and transport planners – so called ‘experts’  – are responsible for the scheme. However, you sometimes drive on the roads in question, so remember, that makes you the real expert. They might have done modelling on traffic flows, and examined all potential permutations, but because you live nearby you already know they must have got their facts wrong. It’s obvious this cycling scheme will inevitably cause ten hour delays to drivers. (Just pluck a scary figure out of thin air; it’s bound to be more accurate than anything the ‘experts’ could come up with).

Dame Janet gets into the spirit. But she’s clearly not a proper expert; she’s severely underestimated the delay from a junction redesign at a mere five hours.

Expand your horizons. Does the cycle scheme only involve one small stretch of road? That might not be much to get excited about, so it’s important to emphasise the effects this scheme will have on all roads and streets within a ten mile radius. Or even more! Go for it! See the example of Raymond, who predicts (correctly) that a slight change to the route drivers have to use to get into a park will have a profound effect on the whole of north London.

Textbook response from Raymond, but he is a little conservative – why not argue that the whole of London will be brought to a halt?

Don’t be shy – remember, you are the traffic expert.

Don’t hold back on the language. Use words like ‘catastrophic’; ‘mayhem’; ‘destruction’; ‘chaos’; ‘insane’; ‘punitive’; ‘will create a ghetto’; ‘a living hell’; ‘armageddon’. Be creative! The more apocalyptic, the better – this is all about speaking truth to power.

You absolutely have to convey how this cycle scheme will bring about the downfall of civilisation, as surely as if it were connecting your street with Hades. (Which it probably will be – you haven’t checked the consultation details, remember).

B+ for effort – unfortunately let down by not stating clearly that this cycle lane will destroy the whole of London, not just Hampstead.

Superficially, this might just be a bit of cycling infrastructure, but you know better. It’s actually a sinister plot to devastate your city.

It’s all about a minority. This is an easy one to get right. Remember, it’s only weirdo cyclists who want these changes. Why should they be privileged at the expense of cars?Forget about all those normal-looking people in ordinary clothes, cycling about where you live –  they’re quite happy mixing with motor traffic, obviously. Just look at them! No, it’s only Lycra Louts and The Spandex Taliban who want special treatment in the form of cycling infrastructure.

Emphasise the weirdness. Nobody likes weirdos.

Think of the children. A cycling scheme – it is claimed! – might actually allow children to cycle around by themselves, but we all know that is preposterous lunacy.

The proper place for a child is on the back seat of a car, being ferried everywhere in safety. So these cycling schemes will actually harm children – it will delay them getting to school, trap them indoors, and also fill their lungs with pollution. Literally. Speaking of which…

Think of the pollution. It’s a well-known fact that the air in our towns and cities is sweet and fragrant. But if a cycling scheme goes ahead in your area, think again! A cloud of thick, noxious fumes will descend over your town or city, a direct result of all motor vehicles everywhere being brought to a complete standstill. All thanks to that innocent-sounding cycling scheme.

Of course, we all know pollution is caused by cycling – it’s just common sense! – but don’t forget to hammer home the message. It’s so important to ensure that all available space on our roads and streets is used for motor traffic – that’s the only way to stop pollution.

Think of the gridlock and traffic jams. ‘What’s a traffic jam’? I hear you ask. Well, you might not have heard of them, or seen one actually happening, because they’re very, very rare – but it’s when motor vehicles start queuing behind each other.

Yes, it does sound unbelievable! We all know that roads and streets flow smoothly at all times. But if you let a cycling scheme go ahead, these so-called ‘traffic jams’ will suddenly appear, and you will be ‘gridlocked’, stuck in your car for days on end. 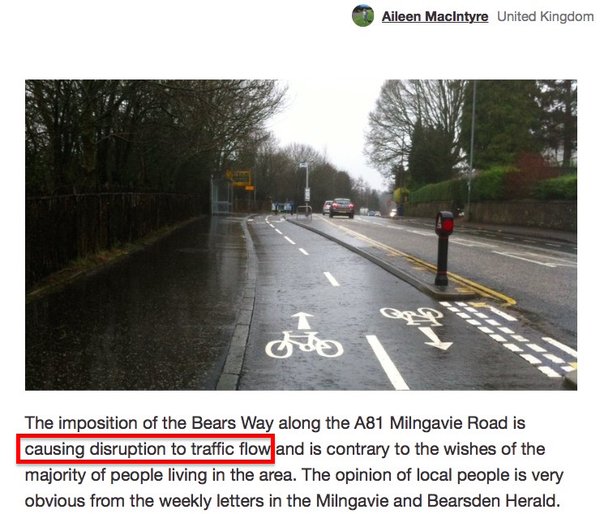 Illustrate your point with a picture of all the stationary motor traffic that has suddenly appeared once a cycle scheme has been built.

The choice is simple – either start preparing food, provisions and supplies for every single car trip, trips that could take days or even weeks, or stop the cycling scheme. Which brings us to…

Don’t bother engaging with the consultation, or even responding to it. Sign an angry petition; yell at people at public meetings; provide flowery quotes for the local newspaper. Anything! But whatever you do, don’t make your views known through the proper channels – that’s how they trick you.

Finally, if all these unstoppably brilliant tactics don’t succeed, it doesn’t really matter. Because there’s one tactic left that can’t possibly fail…. the expensive legal challenge!

This entry was posted in Campaigning. Bookmark the permalink.