The language of compromise

Along with many others, I’ve banged on for a long time about the inherent problems of ‘dual provision’ – the idea that you can provide two different types of cycle provision, in parallel, for different types of users. Typically this might involve a shared use footway for ‘less confident cyclists’, alongside some half-hearted measures on the carriageway like advanced stop lines and narrow painted cycle lanes.

Classic dual provision – a shared use footway, in parallel with cycle lanes on the outside of parked cars, on a 40mph road

By contrast, high-quality cycling infrastructure should have uniformity of provision. It should be uniformly suitable for any potential users – convenience should not be traded off against safety; directness should not be traded off against comfort, and so on. All parts of a cycle network should reach a high standard of comfort, safety, directness and attractiveness. If parts of it don’t match a high standard for all of these criteria, then it’s not good enough. 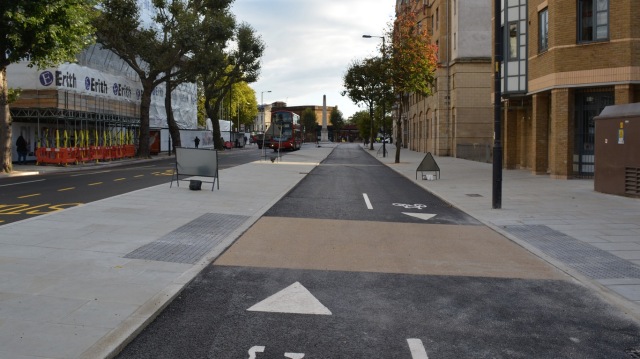 An example of uniformity of provision, that we are happily starting to see in the UK. This is suitable for everyone; the fast, the slow, the confident, the nervous.

So I’m a little bit troubled by this recent piece on the Sustrans blog, by Will Haynes, principally because it argues that we should set out to expect compromise, and to trade off requirements against one another. I’ve quoted the relevant part below.

… I would like to suggest that the reality of most situations means that there is rarely a perfect solution that can be lifted from the design guidance.

At Sustrans we consider the key is the way in which designs are arrived at. Our Handbook for Cycle-friendly design and accompanying design manual recommends 10 top tips that designers should follow.

One of these relates to the adherence to the widely quoted Five Core Principles (Coherence, Directness, Safety, Comfort and Attractiveness). However, how the principles are actually implemented is often relatively subjective and in many cases may conflict.

One way to objectively consider the principles is to use a level of service or route audit tool, such as the Cycling Level of Service assessment tool in the London Cycling Design Standards and Cycle Route Audit tool in the Active Travel (Wales) Act 2013 Design Guidance.

For example a traffic free greenway is likely to provide a high level of safety in terms of being segregated from motor traffic, but is likely to be less advantageous in terms of personal safety at night and directness.

Alternatively, a high quality segregated cycle track may provide good levels of safety and directness but by increasing severance for pedestrians wanting to cross a route it may not contribute to an attractive provision where a high place function is desired.

In summary designing good places to cycle is more than just implementing standard solutions, no matter how high quality they are.

I don’t think this stands up to much scrutiny, to be honest. Nobody is saying a cycle route has to be absolutely perfect. However, the impression given here is that compromise is inevitable, and that delivering a route from A to B will necessarily involve sacrificing one of the key requirements.

For one thing, the audit tools mentioned here shouldn’t be used to choose the least worst option – as implied – but instead should be used to identify failings, to remedy them, and to ensure that what is being built meets the highest possible standard.

Nor should the route that is built necessarily sacrifice on one or more of the requirements for high-quality infrastructure. The examples given are unconvincing. Why should greenways through parks be indirect or socially unsafe? Make them direct. Make them feel safe, with street lighting, and activity. 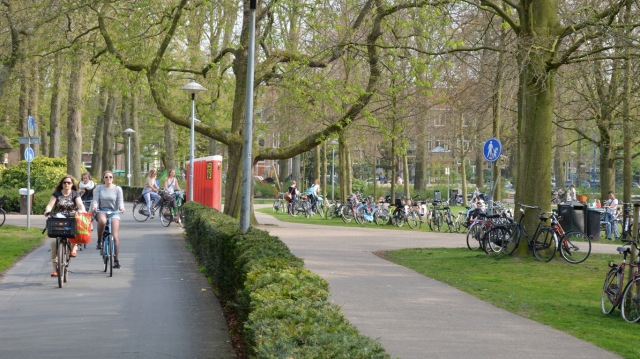 Routes through parks can and should be direct, and should also feel safe.

Likewise, why should cycleways on main roads be unattractive, or contribute to ‘severance for pedestrians’? They are necessary on main roads, and they should be built to a good standard, in keeping with their surroundings, and easy for pedestrians to cross. 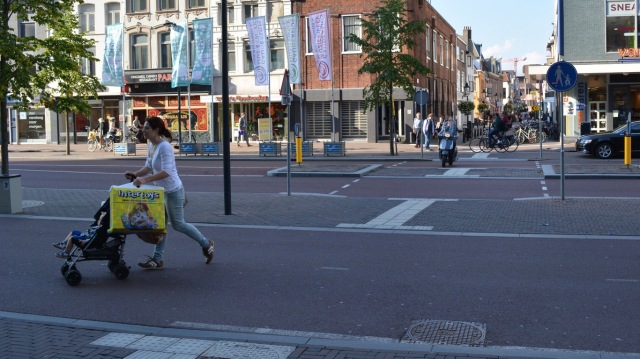 Cycleways don’t have to be unattractive, or hard to cross. Just build them properly.

I simply don’t recognise these kinds of trade-offs when I cycle around the Netherlands, be it in towns, cities, villages or in the countryside. The routes I use feel safe; they are direct; they are comfortable, and they are attractive. Where they are not, there is an obvious problem that needs remedying, and that almost certainly will be remedied when the route or the road comes up for review. The problems are not ones without a solution.

Of course, it’s harder to do things properly. Ensuring that cycle routes are direct, and that they feel safe, comfortable and attractive, requires political commitment, particularly when it comes to reallocating road space, or reducing the amount of motor traffic travelling on residential streets, through physical interventions. But these are problems of political will, not insurmountable problems inherent with delivering cycling infrastructure itself. (It’s no surprise that the highest quality infrastructure in cities like London has required the most coherent and sustained campaign to persuade those in power to deliver it). By contrast, it takes next to no effort at all to deliver rubbish, be it an alleged ‘cycle route’ that disappears off onto indirect and socially unsafe backstreets and alleyways, or shared use footways, or painted rubbish, on main roads because protected cycleways are just too difficult.

Indeed, for that reason, it’s actually quite dangerous to suggest that cycling infrastructure can’t be done to a high standard, because it provides politicians, planners and highway engineers with a ready-made excuse for doing a poor job. That’s not what I want to see at a time when cities in the UK are – in a number of places, and in piecemeal fashion – actually starting to deliver infrastructure that doesn’t compromise.

23 Responses to The language of compromise