There’s a very good piece by David Aaronovitch in the Times (£) on how the Hillsborough disaster shouldn’t be seen purely as a result of police incompetence and negligence, but instead as the product of wider institutional failure and prejudice.

Aaronovitch identifies three contributory factors and one aggravating one’ – the three contributory factors being crumbing infrastructure and the absence of what is now called ‘health and safety’ culture; the violent sub-culture that had emerged amongst British football fans; and, finally, prejudice against football fans in general. Here’s Aaronovitch on that prejudice –

By 1989 the English football fan was pronounced, as a breed, to be scum. A presumption of guilt was made by politicians, authorities, press and by many ordinary people. So fans — all fans — became, by default, a disliked and even pathologised group. Consequently their comfort, their conditions, their civil liberties even, were regarded as moot. They could be herded, coerced, smacked about a bit sometimes, and anything could be believed about them. And then, when the bodies came to be identified, it was discovered that they were just people after all. Dads, daughters, lovers, sons.

Perhaps I’m too prone to reading a particular kind of parallel into everything I read, but this is, of course, highly reminiscent of the way ‘cyclists’ are presented in everyday British discourse – a ‘disliked and even pathologised group’ (check); subject to presumptions of guilt (check); their comfort and conditions regarded as moot (check); anything could be believed about them (check); and of course the appalling realisation that the victims weren’t ‘cyclists’ after all, but ordinary human beings.

… a stereotype of cyclists in general does appear to exist among [other road users]. This stereotype is characterised by:

• serious failures of attitude, including a generalised disregard for the law and a more speciﬁc lack of concern for the needs of other drivers; and

• serious failures of competence and knowledge of the rules of the road.

This stereotype of cyclists is also linked to the fact that cyclists do not need to undertake training, are unlicensed and uninsured, and do not pay road taxes (at least not by virtue of the fact that they cycle).

Lawbreaking; scrounging; ‘they’ all dress the same and act the same; ‘they’ are self-righteous, and look down at you; and so on. I’m sure don’t need to run through all the clichés and stereotypes, the ones that are so prevalent cycle campaigners have wisely chosen to avoid even using the word ‘cyclist’ because of the negative connotations it carries. These attitudes and opinions are then used to legitimise claims that ‘cyclists’ don’t deserve any kind of ‘special treatment’ – i.e. cycling infrastructure – that would reduce risk of serious injury or death. The comfort and conditions of ‘cyclists’ regarded as moot.

The most recent (and typically appalling) example of this kind of stigmatisation appeared this week on the BBC, when Janet Street Porter was given a free rein to spew a stream of stereotypes. We are told that

cyclists breeze through the city with little regard for anyone else

why should cyclists get preferential treatment? What about the very young, the elderly, and the disabled?

The clear assumption here being that ‘cyclists’ aren’t like ordinary people; rather, a subset of society who stand in opposition to the most vulnerable.

Riding a bike is subject to few rules, and many London cyclists can’t even stick to those.

‘A pathologised group’. (Of course, this is in the same week that the CEO of Ryanair has said that people cycling should be taken out and shot.)

This kind of rhetoric poisons the well of public discourse to such an extent that it is contributing to lethal outcomes, just in the way the demonising of football fans as ‘hooligans’ partially contributed to disasters like Hillsborough. Just as ‘hooligans’ don’t deserve to be treated properly, with due concern for the safety, so ‘cyclists’ don’t deserve to be insulated from danger. To take only one example, witness a charming commenter who has ‘no sympathy’ for a 70 year old man left for dead, apparently because ‘they’ (and it’s always ‘they’) ‘get a kick’ riding far out from the edge. Of course. 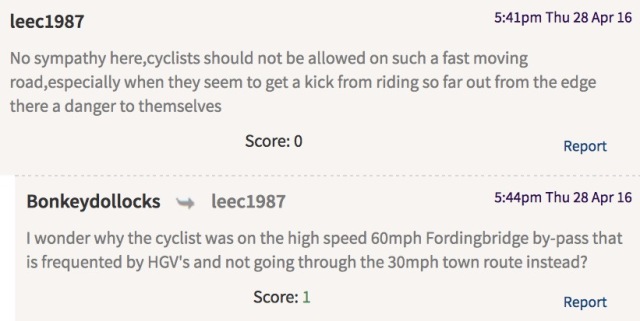 Naturally, the sources of danger presented to ‘cyclists’  and ‘hooligans’  are very different, but the logic is identical. Just as ‘hooligans’ could be pushed around, squeezed through narrow gates, crammed onto the terraces, so ‘cyclists’ should get on the pavement, get on the road, get out of ‘our’ way, and frankly just disappear. Why on earth should ‘they’ get their own space?

And when the bodies appear, it turns out the people who are killed aren’t ‘hooligans’, or ‘cyclists’, but fathers, sons, mothers, daughters.

Still from the Guardian’s Hillsborough film – Anatomy of a Tragedy 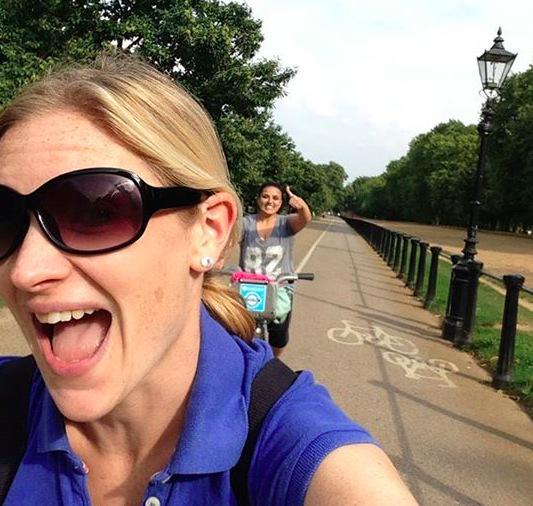 Stephanie Turner. Just one of the people killed while cycling in 2015.

Someone cycling. Not a ‘cyclist’.

But attempts to stop ‘cyclists’ from being injured or killed collide, time and again, with the pervasive stereotype that ‘they’ are lawbreakers, that ‘they’ are dangerous, that designs to keep ‘them’ safe will be at the expense of ‘us’. Take the absurdity of an NHS trust – an NHS trust – launching a petition against cycling infrastructure on Westminster Bridge, apparently on the basis of a belief that ‘cyclists’ will pose a risk to the safety ‘vulnerable road users’.

The safety of ‘cyclists’ themselves plainly isn’t a consideration here; as far as Guy’s and St Thomas’ Hospital Trust is concerned, anyone cycling, young or old, disabled or able-bodied, will just have to lump it on the road, because a failure to provide bus stop bypasses on Westminster bridge means people cycling mixing with heavy motor traffic. People cycling like this gentleman – 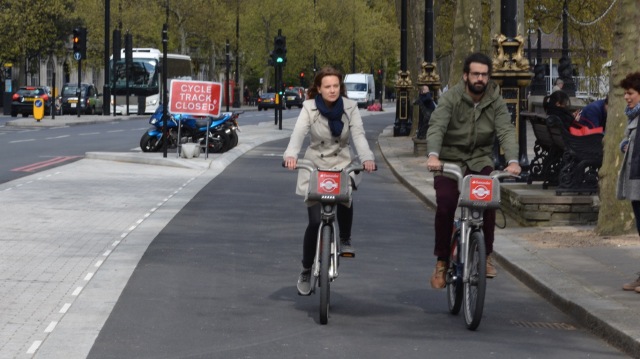 Concern for the safety and comfort of ordinary people is jettisoned as soon as they start cycling, because they’ve become ‘cyclists’, a pathologised group, pathologised in precisely the same way ordinary football fans became ‘hooligans’.

It’s deeply, deeply damaging, and it needs to stop.