One of the nicest things about cycling along the Embankment (apart from the new cycling infrastructure, of course) is… the greenery.

This is particularly obvious as you approach the Houses of Parliament from the north. As the bend of the river unwinds, the Palace of Westminster gradually reveals itself through a lovely forest of trees as you near Parliament Square. And you really notice the trees as this happens. 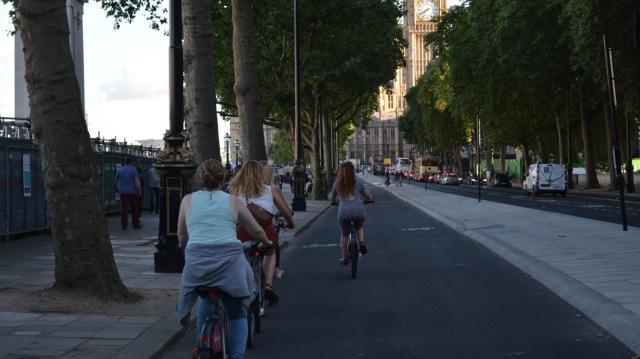 I have to say I wasn’t too aware of this on the few occasions I dared to cycle here before this cycling infrastructure had been built. Frankly, I was probably too busy worrying about drivers, and working out where the next potential hazard was going to come from, to properly engage with the scenery. Now, every time I cycle along here, I can relax and fully appreciate the difference these trees make to the urban environment. They are a softening, calming and sheltering presence that add greatly to the beauty of the city.

The Embankment is, unfortunately, something of a rarity for London though. Far too many roads and streets are not this well-endowed with trees, or indeed have no street trees at all. Blackfriars Road is also lovely to cycle on, thanks to a similar combination of cycling infrastructure and greenery. 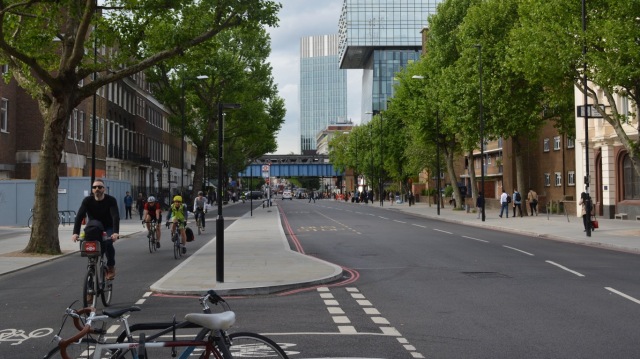 But you don’t have to look very far in London to find streets and roads that are barren. 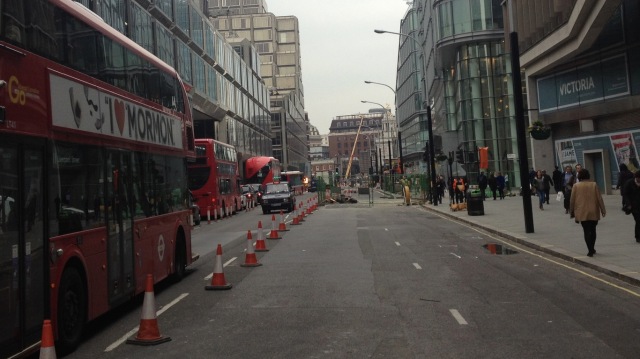 No trees on Victoria Street 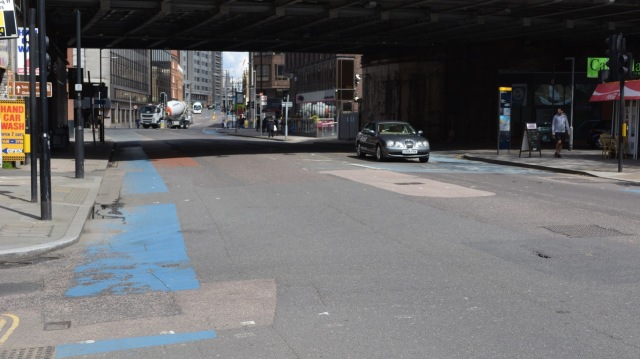 Nor here, amongst the remains of Superhighway 7

They’re usually barren for a reason – most of the street width is being used to accommodate the flow of motor traffic. Trees literally don’t fit, not without some repurposing of street space.

But even roads and streets that have recently been rebuilt are devoid of trees. 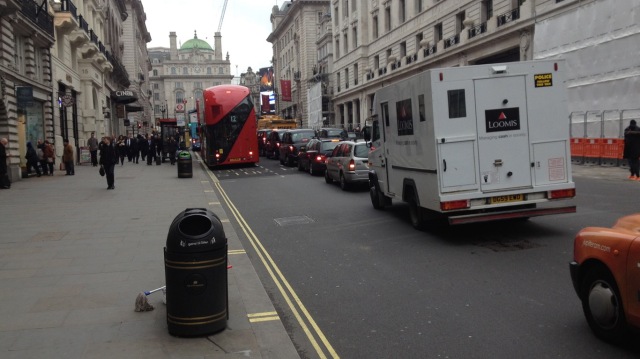 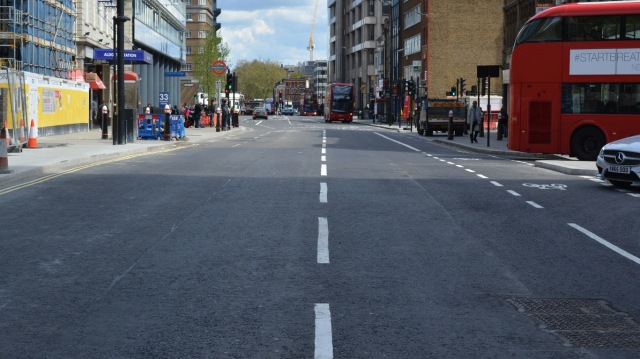 This is even true for roads that now have cycling infrastructure. For instance, it looks like a big opportunity has been missed to plant trees as part of the rebuild of Farringdon Street. 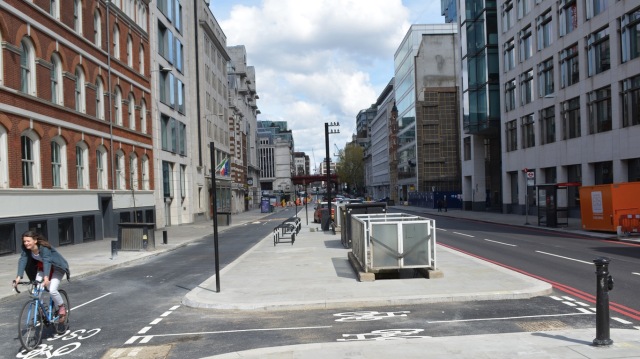 Much nicer, but couldn’t we have had some trees here too?

By contrast, it strikes me that trees are an integral part of new street layouts and roads in Dutch cities like Utrecht. They are planned for, and it just happens. 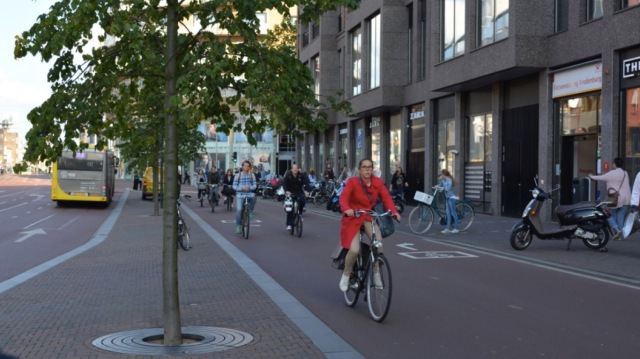 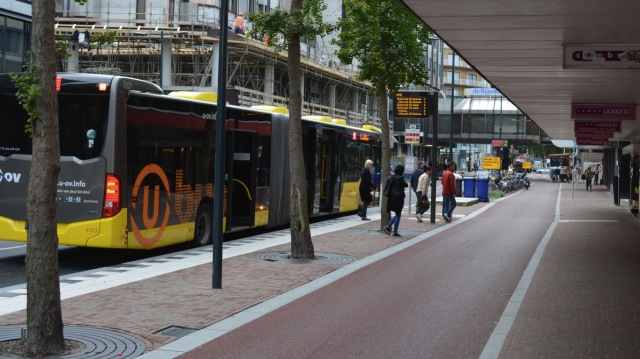 … As has the cycling infrastructure on St Jacobstraat

Indeed, reviewing my photographs of Utrecht, I’m struck by how universally green the city is. All of my photos have trees in them, without me even noticing at the time.

The city centre is full of trees. 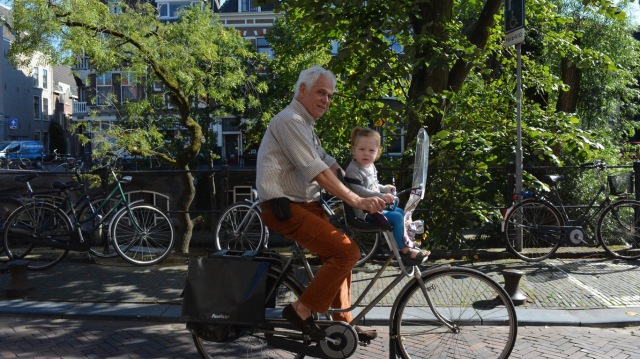 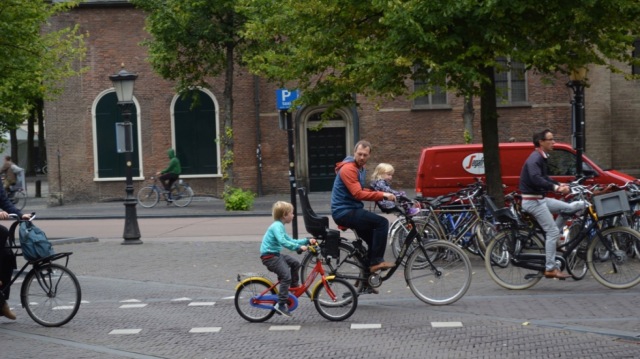 New developments have trees in them.

New street arrangements carefully retain existing trees, and make a feature of them. 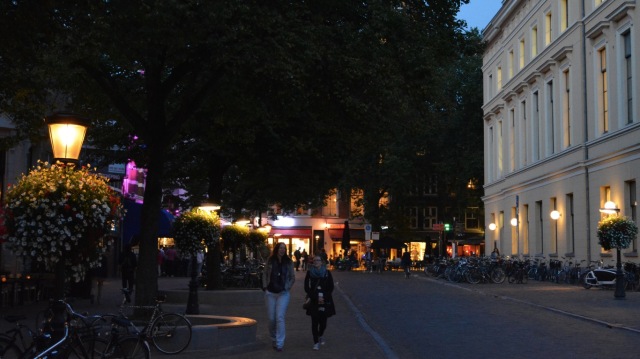 Older cycle paths are, of course, accompanied by street trees – you can usually date them by the age of the trees. A few decades old, in the examples below. 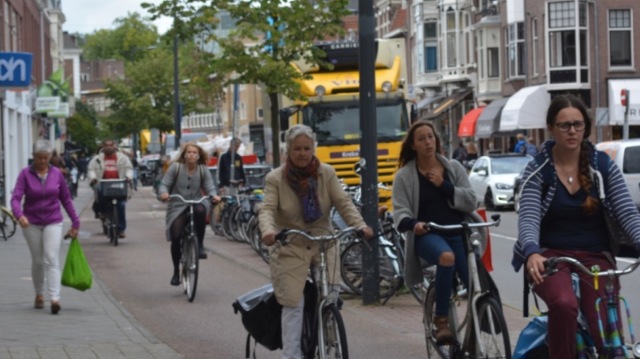 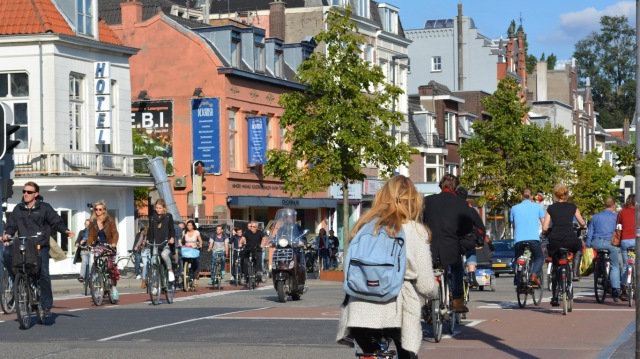 And, naturally, cycle paths in the countryside around Utrecht are framed with trees. 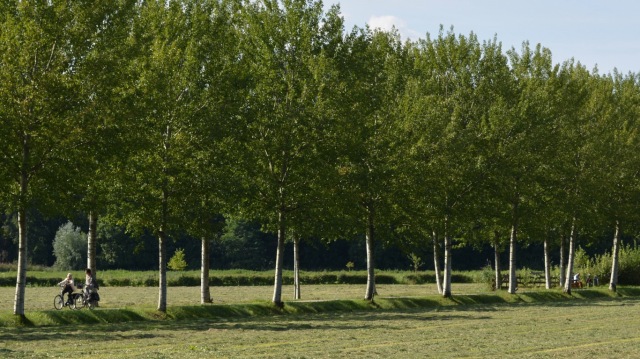 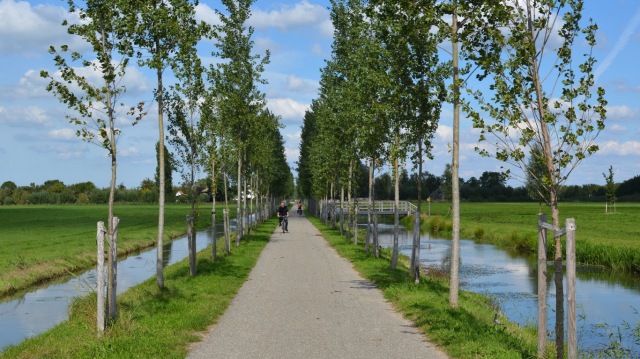 There’s a practical, pragmatic reason for much of this effort – trees help to shelter people walking and cycling from the elements, be it wind, or rain, or sun. A dense line of trees really does make a difference if you are battling a crosswind, and it can stop you getting sunburnt, as well as keeping the worst of the rain off you.

But within urban areas this greenery is vitally important for aesthetic reasons, to soften the urban environment, and to make it calmer, more pleasant and attractive. I’m wondering why opportunities to include them in new road layouts in London – and perhaps elsewhere – are still being missed. Is it cost? Is it an unwillingness to allocate street space away from motor traffic, for these purposes? Or is factoring in greenery something that simply doesn’t appear at the design stage?

We seem keen enough on greenery that we’re apparently willing to spend £180m putting trees on a bridge in the middle of the river – so why are we failing to incorporate greenery into new roads and street designs whenever the opportunity presents itself, as well failing to add it to existing roads and streets?

22 Responses to Greening the city