The problem with Puffin crossings

Posted on September 14, 2016 by aseasyasriding

The death of a woman in Reading earlier this year – and the inquest into her death – has prompted me to write something about Puffin crossings, which to me at least seem to have been a factor in that collision.

Lauren Heath was killed on a Puffin crossing as an HGV driver advanced through the crossing. It still isn’t clear whether he moved while the signals were still red, or whether the green signal had appeared while Lauren Heath was still on the crossing. She was in the driver’s ‘blind spot’ – allegedly, because the driver had failed to properly adjust his mirror.

But one of the factors in her death appears to have been the lack of far side signal at the Puffin crossing. As she walked up the road to cross, she saw motor traffic waiting at a red signal, and started to cross in front of it, without the far side indication of whether or not it is safe to do so, as is the case with more traditional, and familiar, Pelican crossings.

Here is a similar example of a Puffin crossing in Horsham. Walking in this direction, towards the lights, as Lauren Heath would have done, I can see that they are red. But there is no far side signal – the only indication of whether or not it is safe to cross is the small yellow box on the signal post itself.

To look at this box involves rotating through 180°, looking back the way I’ve come. The signal for whether or not it is safe to cross is not in line with my direction of travel. 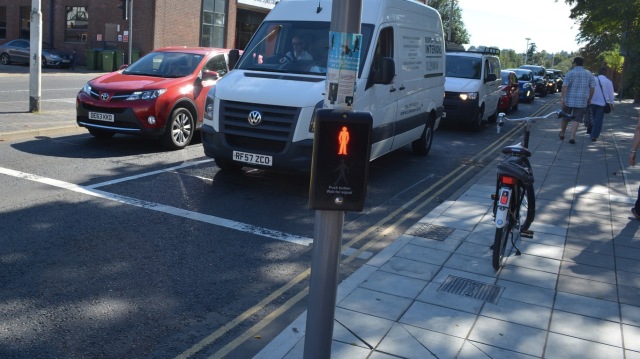 Standing at the crossing, looking back the way i have come from

This is what Lauren Heath would have had to have done, but failed to do – she just assumed that the lights would stay red, and without the far side signal, she had no indication that motor traffic might be about to set off as she walked across the crossing.

We know that humans will make mistakes like this, and I don’t think Puffin crossings are designed to mitigate human fallibility. The lack of the far side signal is a big problem; it means people have to look at a small box in an unnatural position, rather than relying on line of sight in the direction they are travelling.

To be clear, Puffin crossings do have some advantages over Pelicans. For one thing, I like the way that, thanks to detectors, the signals will stay red for motor traffic while people are still on the crossing – it means people who are slower do not have to hurry, warned by a flashing red man. Puffins, again thanks to detectors, also ‘reset’ if people push the button, and then cross before they get a green man – it means motor traffic isn’t held unnecessarily at a crossing when nobody is waiting to cross.

But there are other problems with them, not just the lack of far side signal. They can be deeply ambiguous. Walking up to this crossing, it is easy to assume that the green man applies to the crossing ahead, in the background. Right?

Well, no. That would be wrong. This green man applies to the crossing 90° to the left of my field of view. This crossing, with the same box in the foreground –

Walking across the crossing in the first photo on the assumption you have a green man would actually bring you into conflict with motor traffic.

Here’s a similar (and much worse) example from Sheffield.

The counter argument is, of course, that far side signals can themselves be ambiguous if there are multiple crossings in the line of sight, signalled differently. For instance, people might interpret a green for the section of carriageway on the far side of the road as an indication that it is safe cross the near side section of carriageway, which may have a red. I nearly got caught out in precisely the same way at this dreadful crossing outside the Gare du Lyon in Paris, which had a green on the station side, but a red to prevent people crossing the other half of the carriageway.

Amazingly, this crossing has two different sets of lights for each part of the crossing. I nearly got hit stepping into the road with a green at the far side, without realising there was a red for the nearside section of road.

But the answer to this is really don’t build ambiguous, staggered crossings! Mitigating them with Puffins – which might still be open to ambiguous interpretation – isn’t really the long-term answer. Pedestrian and cycle crossings should be straightforward, without stopping and starting halfway – design them so people can cross the road, in one go. Puffins are really just polishing a turd. 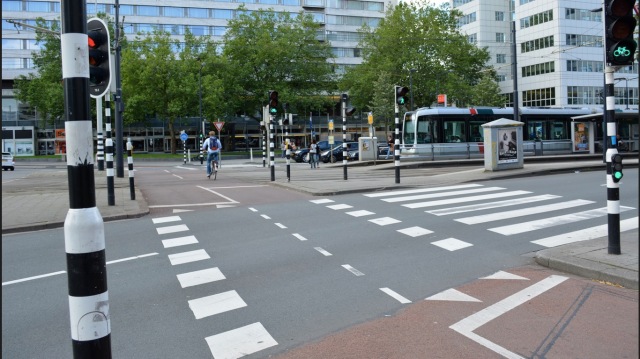 A very wide crossing of multiple lanes in Rotterdam, crossed by both people walking and cycling in one go. No need for Puffin boxes to remove ambiguity.

Another problem with Puffins is that the signal box is easily obscured, because (with good reason) people stand right next to it.

This is often mitigated by adding another signal box on to the same pole – but again this problem wouldn’t arise at all with high, far side signals.

And one final annoyance with Puffins is that if you are approaching them on a bike (at a Toucan crossing with Puffin signalling) the lack of far side signal means you have to stop, and look at the box, in a way you wouldn’t have to with conventional signals. They interrupt progress.

So I’m really not a fan of Puffins, at all. One silver lining is that Transport for London don’t like them either, because they prevent the use of pedestrian countdown. While Puffins do have some good features, I would really like to see them integrated into the more traditional, conventional and intuitive far-side signal design.

The Ranty Highwayman has covered similar ground to this post here – do have a read!

68 Responses to The problem with Puffin crossings