Posted on January 31, 2017 by aseasyasriding

This post is part of a series looking at new Highways England standard on designing for cycling, Cycle Traffic and the Strategic Road Network, or IAN 195/16. The previous two posts can be found here and here.

This particular post will look at how junctions are covered in IAN 195/16. Junctions are important, and this is clearly recognised in the document – dealing with them accounts for around half of its 68 pages. For that reason I’m going to break up my assessment into two posts.

IAN 195/16 starts by giving an overview of the various design options that can be employed to minimise or eliminate the ‘significant conflict’ that can arise between motor traffic and cycling at junctions, ranging from grade separation and ‘unravelling’ (i.e. putting cycling onto completely different routes), right down to slowing motor traffic when turning on ‘low volume roads’. In other words, the full spectrum of approaches employed on Dutch cycle networks.

On page 32 we have this large, clear table of what kind of junction treatment is appropriate (and indeed required) for cycle traffic, given the speed and volume of motor traffic. 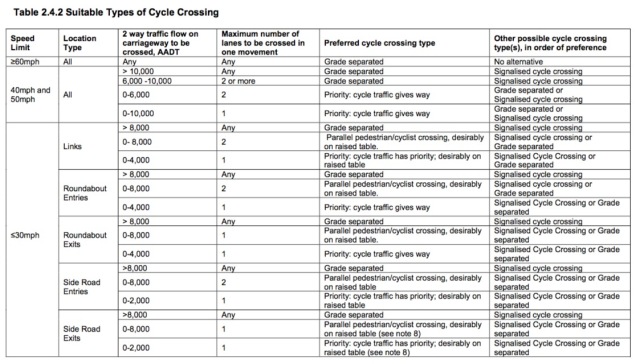 Some things immediately leap out from this table. If motor traffic is travelling at 60mph or above, any crossings of these roads have to be grade separated – i.e. in an underpass, or by means of a bridge.

The table also (importantly) stipulates the maximum number of lanes that should be crossed in one movement, again according to speed and volume. So for instance, above 6,000 motor vehicles per day on a 40-50mph road requires a refuge, allowing one lane to be crossed at a time.

The design options are split into ‘preferred’ and ‘other possible’ crossing types, with this stipulation –

Designers shall use the “preferred” option in Table 2.4.2 unless there is a need to provide continuity with other existing cycle route provision and where agreed with Highways England.

The word ‘shall’ being a requirement; ‘preferred’ options have to be used unless continuity is necessary.

The document then looks at the various types of crossing in turn. We’ll start with ‘signalised’ crossings. Unfortunately I immediately find something to disagree with!

Low level signals are essentially provided for convenience – for people waiting at lights to avoid having to look upwards. They should not be viewed as the ‘primary’ signal for reasons given in the paragraph – they can be obscured easily (by people waiting, for instance), and are smaller than high-level signals. Low-level signals are much harder to see on the approach to a junction, even if they are not obscured. 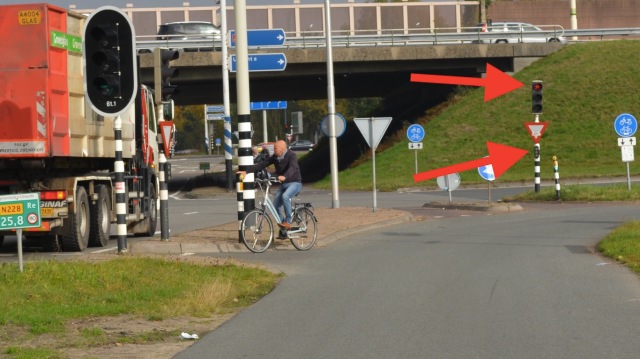 IAN 195/16 does however suggest the use of cycle detectors on approaches, and synchronising lights so people cycling get smooth journeys through junctions, which are obviously sensible recommendations.

It also makes clear that the ‘default’ design option for cycling should be a single-stage crossing, ‘without the need for cycle traffic to wait on islands in the middle of signal controlled junctions’ – mainly because cycle traffic is faster than pedestrian traffic, and can cross junctions relatively quickly. There are clear stipulations for signal timings to ensure that slower-moving cyclists can safely clear a crossing, depending on its length and gradient. For instance, a 36m crossing of six lanes (2 x 3) on an uphill gradient requires 16 seconds, from a standing start.

IAN 195/16 is clear that ‘Toucan crossings’ (essentially, cycling bodged onto a pedestrian crossing) are inferior –

Toucan crossings are less comfortable for both pedestrians and cyclists than separate crossing facilities. They shall only be used where it is necessary to share the same space at the facility, for example where there is a shared path leading to the crossing or where there are complex off-carriageway pedestrian and cycle movements that are best accommodated in a shared use area.

… although I’m not quite sure this is clear enough to avoid them still being used as a bit of a lazy bodge, in combination with shared use.

Staggered crossings are essentially ruled out, unless they can accommodate the ‘cycle design vehicle’ (1.2m x 2.8m) on an appropriately-designed two-way cycle track.

The dimensions of refuges (which are very important for ‘priority’ types of crossing) are stipulated; they must be at least 3m long in the direction of travel for cycle traffic. Here’s an example of a 3m refuge at a Dutch roundabout on a rural main road. 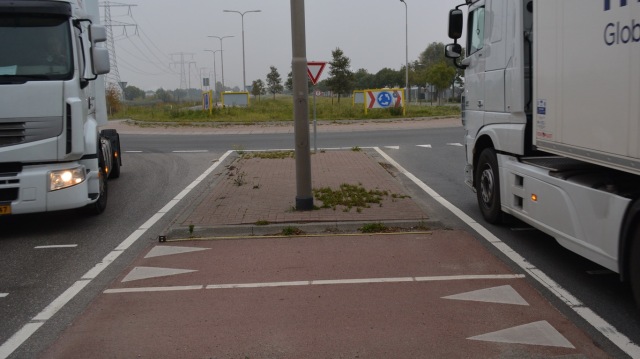 Refuges should be able to comfortably accommodate cycles of all types in this kind of situation.

We then come to a longer section on priority junctions in general, and how cycle movements should be handled at these kinds of junctions.

‘On carriageway’ cycle provision – i.e. painted lanes, or simple ‘combined traffic’ is, as per earlier requirements in IAN 195/16, only appropriate on roads with 30mph limits and with traffic flows under 5,000 vehicles per day. Roads with traffic speeds of 40mph or over require cycle tracks. Given these constraints, there isn’t a great deal to say here, beyond ensuring that junction geometry is tight to ensure lower motor traffic speeds at the conflict point – although I’m not sure the reference to a minimum 10m corner radii in rural areas (Section 7.17 in TD 42/95) is appropriate.

IAN 195/16 does also stipulate that if slip roads are present under these speed/flow conditions, cycle traffic ‘shall be accommodated using off-carriageway facilities’, regardless of the lower speed limits and motor traffic volumes.

The aforementioned corner radii recommendation also means that IAN 195/16 is stipulating that any ‘physical separation’ of cycle lanes on these kinds of roads has to end a minimum of 20m from the junction, which is poor. It essentially leaves anyone cycling on these lanes feeling dreadfully exposed on the approach to, and at, the point of conflict, and won’t do anything to slow turning speeds. Just like these bad examples on the Leeds-Bradford ‘superhighway’, below.

Where ‘off-carriageway’ provision is employed (i.e. cycle tracks), IAN 195/16 gives us a choice between ‘bent out’ and ‘bent in’ crossings of side roads.

‘Bent in’ crossings are defined as –

I have to say I have never seen this kind of design employed anywhere in the Netherlands – it essentially involves a cycleway, at distance from the road, moving onto it and becoming a cycle lane at the junction, as per the diagram in IAN 195/16. 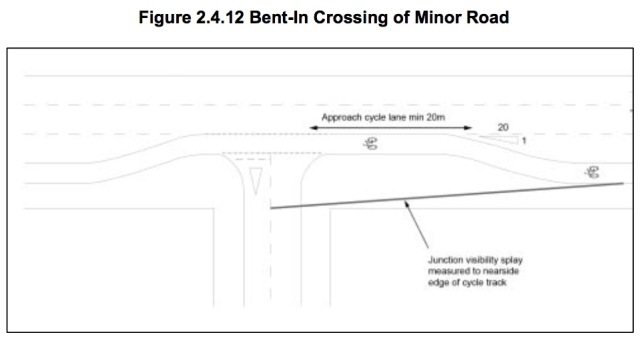 Perhaps this kind of design has been used somewhere in the Netherlands, but it must be very rare and I think it is inferior to maintaining a cycleway across the junction, even if that cycleway is only a short distance from the give way line. Maintaining a cycle with visual continuity affords more comfort and safety than reintroducing people onto the road, on a painted lane. 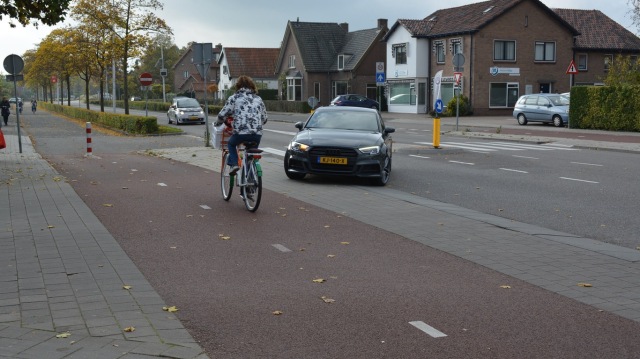 With the caveat that this is a two-way track, this kind of design is clearly more appropriate than a cycle lane emerging onto the carriageway to cross the side road

The ‘bent out’ type of crossing recommended by IAN 195/16 is obviously far more familiar, and ubiquitous in the Netherlands, employed either with simple painted markings, as in the example below (which is a non-priority crossing for cycle traffic) –

… or with more ‘visual reinforcement’ – coloured asphalt continuity, and a hump, and give-way markings.

And it’s here that we hit a bit of a snag with IAN 195/16. It stipulates that this ‘priority’ form of crossing is only appropriate on roads with a 30mph limit, or below. (And the same applies for the less preferable ‘bent-in’ crossing).

That means that any main road with a 40mph limit or higher cannot have any priority crossings for cycle traffic along it. It will involve giving way at any side road, regardless of how well that side road has been designed, like the example above. All crossings in this context have to be ‘non priority’.

This might not be a particularly onerous problem for the kinds of roads that are – at present – covered by IAN 195/16. That is to say, trunk roads that mostly go through rural areas, with few side roads, and where having to yield isn’t too much of a problem. In my experience cycling along 80kph roads in rural areas in the Netherlands, non-priority crossings are reasonably common alongside priority ones, depending on context, and they are not noticeably frustrating. The photograph above of a non-priority crossings is fairly typical.

However I think this stipulation is too rigorous – simply applying a blanket ‘non-priority’ rule above 30mph quite obviously rules out priority anywhere alongside faster main roads, even where it can be designed for safely, or where it simply makes sense.

Another photograph of a priority crossing, this one next to a section of 60kph (40mph) road, so new it is still under construction! Note this crossing has nothing more than simple give-way markings for motor traffic. Finished crossing here

So overall, although there are good design recommendations (and requirements) in this part of IAN 195/16, I think it is one of the weaker sections of the document. Some of the design ideas (the ‘bent out’ crossing; the removal of separation 20m before junctions) are not really good enough, while other requirements are too severe. There is definitely room for improvement here.

We’ll wrap up this look at IAN 195/16 in the next post, with a look at other ways of dealing with cycle traffic at junctions!