Getting side roads right

A bit of a picture post this one. Below are twenty photographs of cycleways crossing side roads, all from my week in the Netherlands earlier this month. In order, they are in Delft, Gouda, Den Bosch, Nijmegen, Arnhem and Amsterdam. They are from a mix of suburban, city centre and rural locations. 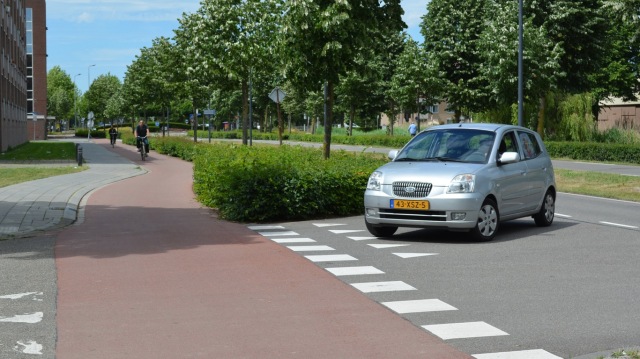 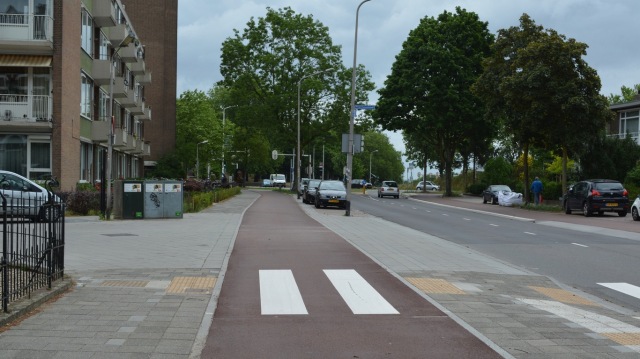 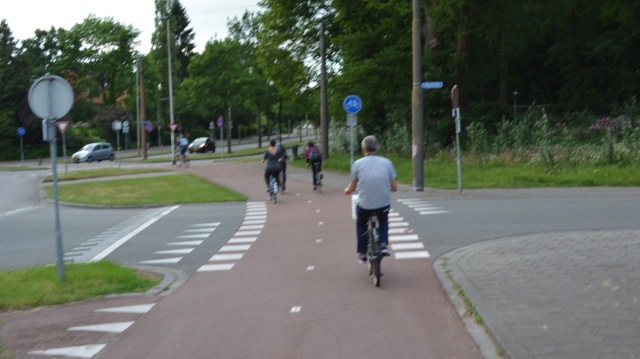 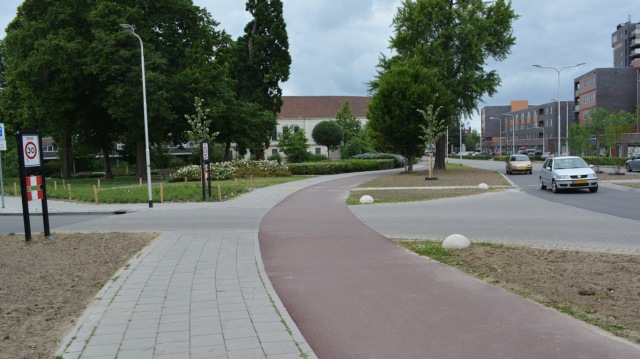 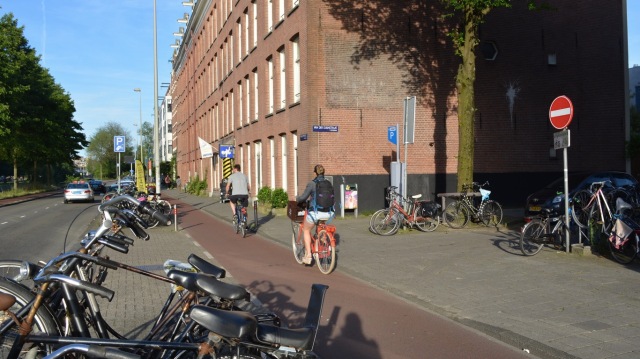 They’re a mix of bi-directional and uni-directional cycleways, and some form part of raised humps, while others are flush with the road surface. But beyond that, they are all very similar.

Firstly, although it might not be clear from the photographs, all the side roads being crossed will have limited flows of motor traffic. They all run across access roads; roads that are carefully designed to only allow motor traffic for access purposes. These are not roads that people will be turning into to drive off somewhere else – they will be accessing properties on that road, or just off it. In some cases the roads are either exit-only (as in the last example) or entrance-only – all part of this system of limiting the amount of motor traffic on these kinds of streets. This is important, because it limits the number of interactions anyone using these cycleways will have with motor traffic.

Secondly, all these cycleway crossings are designed in precisely the same way. All are composed of uniform red asphalt, with absolutely no markings or ‘breaks’ across the cycleway as it passes the side road. There is absolutely clear visual continuity, and this goes for the footways that in some examples run in parallel across the side roads. This is important because it shows precisely who has right of way at these junctions, with absolutely no ambiguity.

Unfortunately this is something we aren’t quite getting right in the UK. Here are some side road examples from Mini Holland schemes in London – in Waltham Forest and in Enfield.

Side road treatment Enfield A105 pic.twitter.com/Q43Kd7laNF

Lured onto this path while heading east I had to bunny hop to the road as I saw priority disappearing! Incomplete or by design? #miniholland pic.twitter.com/omda47MZeu

Enfield mini-Holland. The calmness of the main road compared to neighbouring streets was palpable. The modal filer is old but improved. pic.twitter.com/dNlBaZNAy8

This is it in action. Slightly cautious as it had barriers obscuring sightlines. pic.twitter.com/Hy2glxrgit

Rode Enfield's new #miniholland A105 cycle tracks yesterday – could do with some some minor tweaks, but overall pretty impressive! pic.twitter.com/FQIJ08GBsY

To be clear, these all look like very promising cycling schemes. But they are being let down by this minor technical detail. Namely, those kerbs across the cycleway where it meets the road, and the changes in colour, simply shouldn’t be there.

They suggest that the cycleway is temporarily ‘intruding’ on the road, instead of clearly continuing across it, and to that extent they introduce an element of dangerous ambiguity. Drivers might assume that because the cycleway ‘stops’ at the road (it changes colour, and has a line across it) they have priority, while, at the same time, someone cycling might be assuming the exact opposite, that they have priority. That’s a recipe for collisions.

Of course if we want people cycling to give way, instead of having priority, then that should be made clear too. This is more appropriate on faster and busier junctions, typically on roundabouts in rural areas in the Netherlands.

Let’s get this right, so those promising schemes work for everyone.

21 Responses to Getting side roads right