The makings of a successful cycle street

The ‘cycle street’ concept is a familiar one to cycle campaigners – a street where, it is claimed, cycling has priority, and ‘cars are guests’, sometimes with added rules about ‘no overtaking’.

I think it’s easy for British campaigners to get excited about ‘cycle streets’ primarily because the concept corresponds largely to existing cycling behaviour on busy British roads. Wouldn’t it be great – they might think – to cycle along this road without drivers attempting to overtake, and with those drivers knowing that they are ‘guests’ on it.

But the most successful ‘cycle streets’ don’t have any of these kinds of rules. The key ingredient is simply ensuring that the street in question isn’t a through-route for motor traffic. Markings, rules and signs are largely superfluous – indeed unnecessary – when this key condition is met. In fact they often aren’t even ‘cycle streets’ in any formal sense.

This is Buitenwatersloot in Delft. 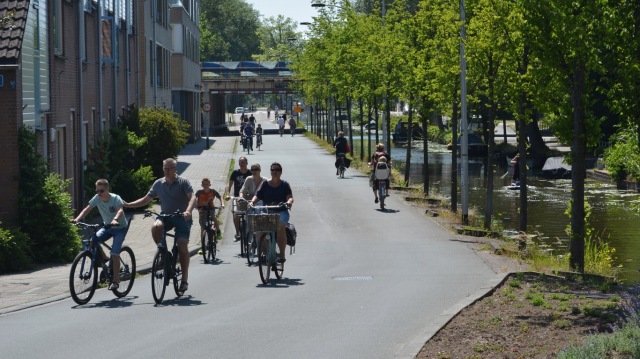 It’s a busy route in and out of the city centre, running westwards from it. From this photo it might look like a ‘cycle street’, but it is in fact just an ordinary Dutch street, with no specific road design – just a blank asphalt surface – and with no ‘cycle street’ related signs.

Drivers can obviously still use this street – there’s one doing so in this photograph below – but they will only be accessing properties along it, and on the handful of side streets, not going anywhere else.

This road is just part of a small ‘cell’ for driving, shown in red, while forming a direct route for cycling in an east-west direction. The green arrows also show that this cell is permeable for cycling to the south. 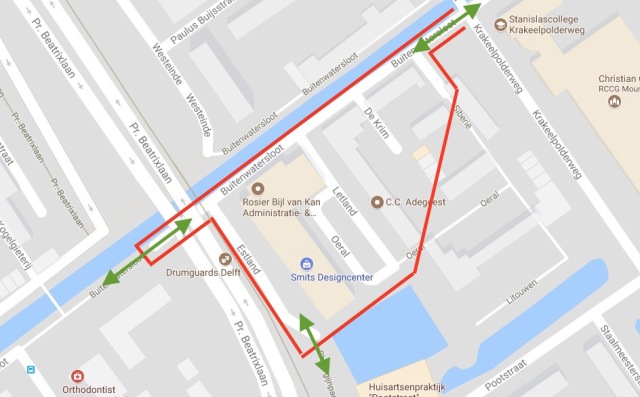 This street forms a high-quality cycling environment not because of any road markings, signs, or instructions to drivers, but because it will only ever have very small numbers of drivers using it. It might be nice to mark this street as a ‘cycle street’, but it’s not necessary.

And indeed we should be wary of emphasising markings, signs or instructions to drivers, because they are very easy to implement without changing anything else. It’s very tempting for highway authorities to stick up signs and splash down some paint without addressing through-traffic problems (hello the Quietway programme). ‘Cycle streets’ and ‘Quietways’ can be created with signs and paint, but in reality, it’s the through-traffic issue alone that defines whether ‘cycle streets’ are comfortable, safe and attractive cycling environments.

14 Responses to The makings of a successful cycle street