Posted on January 19, 2018 by aseasyasriding

What does the word ‘strategic’ mean?

The Oxford English Dictionary on ‘strategic’

Identifying long-term aims and interests – and working out how to achieve them. That sounds quite sensible, doesn’t it? Who could argue with that?

Yet I found myself having to look the word up, after Transport for the North – the organisation formed to ‘transform the transport system across the North of England, providing the infrastructure needed to drive economic growth’ – used it in a way that implied active travel is outside the remit of ‘strategic’ transport. 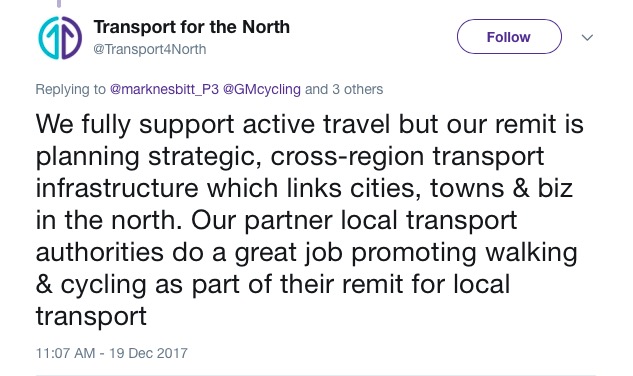 This might have just been some clumsy wording from the person running their social media account, but this attitude is reinforced not just in the imagery Transport for the North uses, but also in the reports it produces.

Planes, electric cars, trains, motorways – but not much sign of active travel here –

Spot the missing modes of transport

Equally, as Carlton Reid has spotted, Transport for the North’s new Strategic Transport Plan contains essentially no discussion of active travel, choosing instead to focus on road and rail connections between urban areas. This is despite Transport for the North’s remit covering journeys ‘within the North’, which will obviously include all those short trips that could be walked and cycled – in fact, the majority of the trips we make. 68% of all British trips are under 5 miles; 23% are under 1 mile.

From the latest National Travel Survey.

So what’s going on here?

I think it’s indicative of a belief – one that’s widespread across Britain, and not just limited to the North – that only certain forms of transport, and certain types of journeys, are worthy of investment, and serious consideration. Only motorways, roads, railways, airports and shipping can be thought of ‘strategically’ (whatever that actually means). The mundane ordinariness of walking and cycling for trips under 5 miles in length isn’t apparently something that deserves to be thought of ‘strategically’.

Closely tied to this belief is an assumption that walking and cycling will just happen by themselves, with words like ‘encourage’ and ‘promote’ featuring prominently alongside soft measures that history has shown will have very limited effect without the kind of investment, planning and engagement we conventionally apply to other ‘strategic’ modes of transport. This is why the person who composed the tweet for Transport for the North – the one that bluntly stated their focus on ‘strategic’ transport excludes walking and cycling – was evidently happy to suggest that local transport authorities ‘do a great job promoting walking and cycling’. (That ‘promote’ word again).

In reality, it’s pretty obvious to most campaigners that local authorities – with a few honourable exceptions – really do not do ‘a great job’ on walking and cycling. Quite the opposite. They’re hamstrung by a combination of limited budgets, limited political will, and limited expertise, or a combination of all three. These problems plainly won’t be solved if organisations like Transport for the North continue to treat walking and cycling as someone else’s problem.

And even if Transport for the North only want to define ‘strategic transport’ as inter-urban trips, that still doesn’t excuse a lack of consideration for walking and cycling. Not only will cycling in particular still form an important connection at either ends of journeys on public transport, as well as a way of making journeys of 5-10 miles into towns and cities (increasingly likely with the widespread prevalence of e-bikes), any new road and rail infrastructure should consider opportunities for developing walking and cycling links as part of that development. All too often new projects can impose barriers on these modes of transport; failing to think ‘strategically’ will fail to deliver important new connections for walking and cycling.

A ‘by-product’ underpass for walking and cycling in Nijmegen – a useful direct route, delivered as part of a junction upgrade

A new cycling and walking underpass under a motorway on the outskirts of Delft, providing a direct route into the city centre.

A new cycling and walking suspension bridge, spanning a large new turbo roundabout near the Hook of Holland 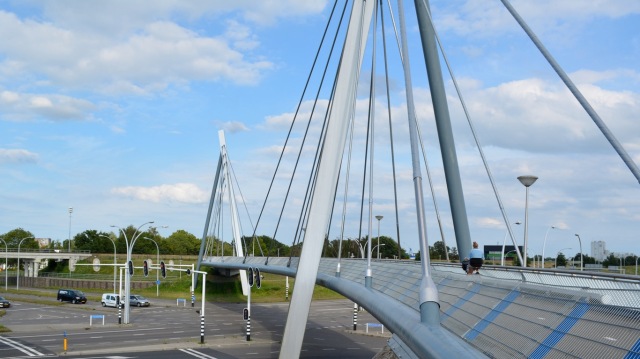 A cycling suspension bridge, providing a direct route across a large junction on the outskirts of the city of Zwolle

In the Netherlands, not only is cycling catered for ‘strategically’ in planning – in other words, it is taken just as seriously as other modes of transport – but it is also embedded in road and rail projects too, ensuring that cycling actually benefits from schemes that deliver other aims.

With the increasing importance of improving public health, and the importance of ensuring that – with more and more of us living in urban areas – we make journeys by the most efficient, healthy and sustainable modes of transport, a failure to think genuinely strategically about walking and cycling would be truly disastrous. We need to make those short, sub 5 mile trips as easy, as safe and as convenient as possible, by walking and cycling. That won’t happen if it these modes get ignored by the organisations with power and responsibility.