Between 2013 and 2015, a section of the bypass skirting the town of Horsham was widened from four lanes to eight lanes, to incorporate a system of slip roads for access to a new development. 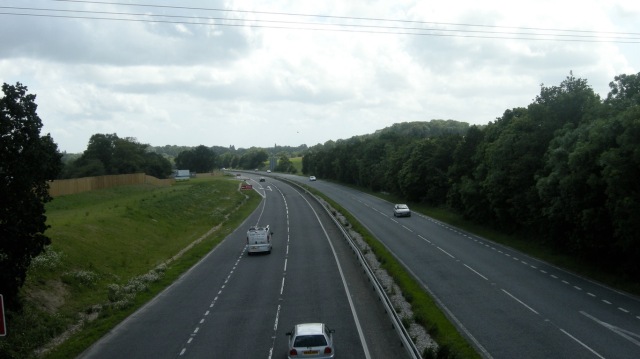 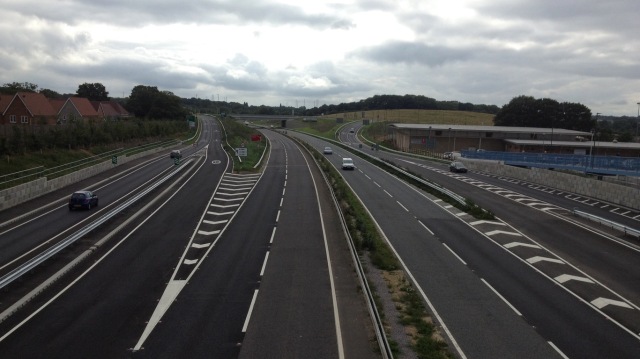 This meant that the bridge I stood on to take the ‘before’ photograph had to be replaced – a new bridge with a wider span was required.

The old bridge was no great loss. Although it was ostensibly a ‘walking and cycling’ bridge, it was built at a time when nobody really thought about cycling, and consequently it was barely wide enough for two people to walk side-by-side, and obviously not sufficiently wide to accommodate cycling in a comfortable way. 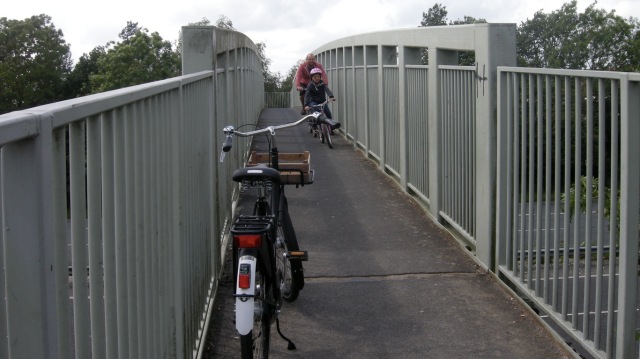 So… we got a new bridge, with a longer span. Is it better?

The good news is that it is indeed wider, and has come fitted with dedicated street lighting, although unfortunately I doubt it will be wide enough to accommodate future demand, and it doesn’t separate walking and cycling. 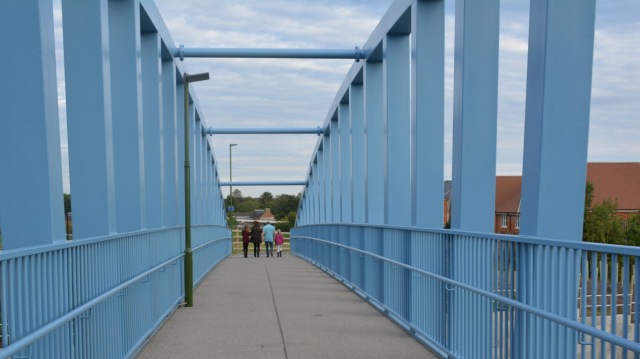 The really bad news is that the bridge has come accompanied with a whole series of obstacles that either deliberately or accidentally make cycling inconvenient.

The deliberate measures are a series of slalom metal barriers, built into the bridge itself, presumably with the intention of slowing down people cycling on one of the access ramps. 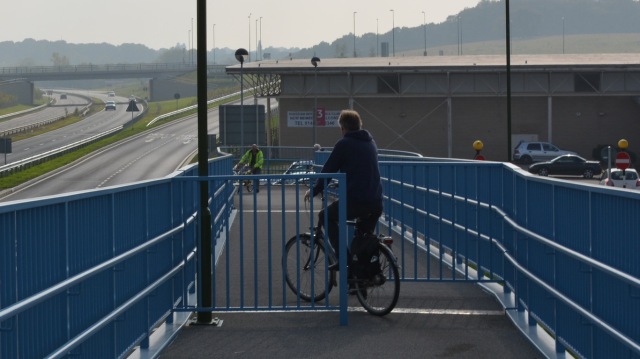 In addition, rather than smoothly curving around to join level ground, the end of the ramp has a pair of tight zig-zag bends, designed to minimise the footprint of the bridge (and therefore – surprise surprise! – to avoid the loss of any car parking spaces). These bends are just as awkward to negotiate as the barriers.

Earlier this year, Horsham District Cycling Forum tried out a range of adapted cycles that West Sussex County Council provide for use on the nearby running track. It was an ideal opportunity for seeing just how difficult – or indeed impossible! – it might be to negotiate this bridge, and its obstacles, on non-standard cycles.

Before we starting using them, my instinct was that it may indeed be impossible to negotiate the bridge, especially with the Van Raam wheelchair transport bike, shown in the photograph above. The bends and the barriers would simply prove too tight.

However – and to my slight surprise – it did turn out to be possible. But only just. The turning cycle on the Van Raam is actually pretty good – the front wheels steer at the same time as the front part of the bike pivots, and that allowed me to steer around the bends, and through the barriers – although with only millimetres to spare. You can see my experience in the video below.

Both the bends and the barriers are extremely tight, requiring a great deal of precision to negotiate. Although it is just about possible, we really shouldn’t be making life so difficult for people who might be using non-standard cycles.

I was, of course, using the Van Raam without the weight of a passenger. Repeatedly having to come to a near stop to manoeuvre around the barriers and bends will make it pretty hard work for anyone with that extra weight, especially given the gradient of the ramp.

The start of the video also shows the difficulties presented to users of these cycles by conventional ‘shared use’ footways. These arrangements might be relatively easily negotiable (at least at slow speed) by people on standard cycles, but it was pretty tight for me on the Van Raam. The dropped kerbs, bumps, slopes and tactile paving – as well as the relatively narrow width, shared with pedestrians – all make for unnecessarily hard work. It’s an important reason why the ‘shared use footway’ approach isn’t particularly inclusive.

Designing properly for cycling should start with the basic assumption that it must be fully accessible for the full range of cycling vehicles that are available today. If we aren’t designing for that standard, then we risk making it extremely difficult or impossible for those users who are already at a disadvantage. 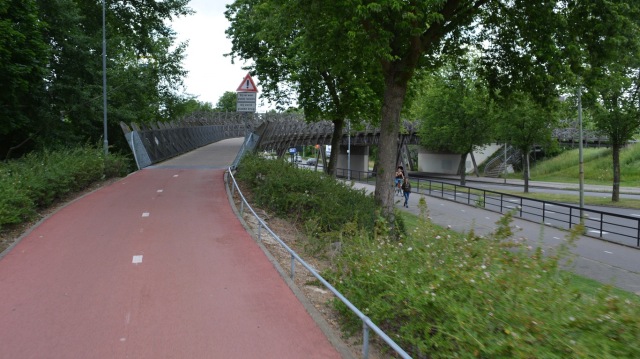 A cycling bridge – over a much smaller road – in the Dutch city of Den Bosch, that has a smooth gradient, and no barriers or unnecessary obstacles. It is possible.