The Netherlands is a wonderful country to cycle around, with a dense cycle network made up of motor traffic-free paths, low motor traffic access roads, and protected cycleways, all of which allow you to make door-to-door journeys in complete comfort and safety. That doesn’t mean, however, that everything there is perfect. There are many streets and roads across the country which are still poor. Dutch cycling infrastructure did not fall out of the sky; it had to be built, and many places are still waiting, even in the centre of famously cycle-friendly cities.

An unpleasant cycling environment in the centre of Amsterdam

In other places, there are compromises – clearly inadequate cycling environments, that are difficult to resolve. Again, just as with the UK, there are competing demands for road space. While in most Dutch urban areas those demands are resolved in favour of cycling and walking, there are streets where it is genuinely difficult to fit walking, cycling and major bus routes into the same space.

These poor streets should not to be used as examples to copy simply because they are ‘Dutch’. While thousands of people cycle every day on the street shown in the photograph above, even though it is shared with a significant number of buses, that does not mean that this is a good situation, or good practice that should be transferred to the UK. In reality this is a serious gap in the network. People are only cycling here because the rest of the network across the city is so good, good enough for them to tolerate sharing with buses (and some private motor traffic) for a few hundred metres.

The Dutch are also capable of making mistakes. It’s not always perfect, and sometimes it’s very silly – just as bad as anything in the UK.

A cycleway with a right-angle bend that then joins a bus corridor, again at right angles, in a new development in Delft

Again, this is simply bad. It’s an obvious mistake, made by someone who hasn’t considered how people cycling actually move about.

But worse than all these kinds of poor examples are the new designs in the Netherlands that take cycling for granted. The Netherlands has a tried-and-trusted formula for ensuring that cycling is a comfortable, safe and pleasant experience, with standard design templates that work extremely well. However that template sometimes get jettisoned, with depressing results. Like at this roundabout (or ’roundabout’) in Winschoten, in the province of Groningen in the north of the Netherlands.

Roundabout design that works well for walking and cycling in the Netherlands is well-established. One of the basic principles is that cycling – whether with priority or without – passes on a cycleway that is at a larger radius from the annular ring for motor traffic. This means that there is a waiting area for motor traffic to enter the roundabout, while keeping the cycleway clear, and also that motor traffic can exit the roundabout, and yield to cycle traffic, and pedestrians crossing on zebras, without blocking the roundabout.

A ‘standard’ Dutch roundabout with perimeter cycleway, with priority

These principles have been abandoned with this design. Motor traffic completely blocks the passage of people walking and cycling as people queue to enter the roundabout. 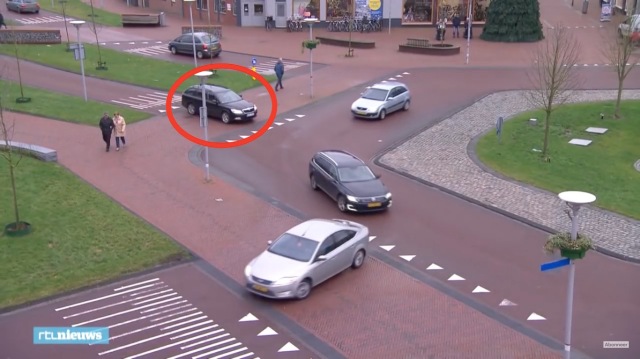 More dangerously, drivers exiting the roundabout are not meeting people walking and cycling at a perpendicular angle, as they are forced to do with the conventional, established Dutch roundabout designs. Instead they have to look sideways, or backwards over their shoulder. As people observe in the video, this is hazardous.

These drivers are having to look sideways to see if their passage off the roundabout  is clear. With a conventional Dutch roundabout any potential conflicts would be directly in front of them.

This roundabout design also fails to separate cycling and walking, lumping them together on an unclear shared paving surface. Walking and cycling are different modes with different requirements, and should be treated separately, especially at such a busy urban location. Pedestrians also lack the clear unambiguous priority of a zebra crossing.

In short, the design is ambiguous, dangerous, and unpopular. As the councillor observes in the video, it is better that ’roundabouts look the same. Because then you know where you stand.’

So what has happened here? This is an enormous space, with clearly enough room for a perimeter cycleway, and for separate walking space, with zebra crossings. Indeed, this new layout – built in 2014 – has replaced a roundabout with perimeter cycleways (albeit not very good ones). To my mind, it looks like a classic example of style over substance – an unusual hexagonal design with ‘shared space’ motifs like reduced delineation between modes appears to have proved more attractive to the town than the tried-and-trusted (yet rather mundane) basic Dutch roundabout.

There’s even a rather depressing comment below the video in Dutch, roughly translated as

… in the UK they are testing free junctions, just a whole lot of space and no signs and all … what has happened is that everyone drives more calmly and in percentage terms the number of crashes has fallen sharply

This commenter is apparently unaware that in the UK, ‘shared space’ – with limited signs, clutter and delineation – arrived as a sexy, foreign concept… from the Netherlands itself!

There are similar problems with sections of this recent road re-design in Oost-Souburg, in Zeeland – right at the opposite end of the country.

While parts of the road have excellent new cycleways, this section appears to have designed for cycling with shared use footways with no clear priority at side roads – the kind of awful approach we see all too often in the UK. Just as with the roundabout, cycling has effectively been ignored in the design, lumped in with walking, with both modes designed for in an ambiguous way. Again, there’s no shortage of space, but aesthetics appear to have been more important than functionality.

But although cycling levels are high in the Netherlands – certainly compared to the UK – cycling there doesn’t ‘just happen’. People can and will change their mode of transport if it becomes too difficult, too dangerous, too inconvenient, or too unpleasant.

There's a fair bit of complacency in the Netherlands about cycling. Sometimes people actually believe that nonsense about it being "in the blood". In reality cycling is a fragile mode which declined here just as elsewhere and it has never fully recoveredhttps://t.co/XAmjV0F3fB pic.twitter.com/4ymnBwHp5o

Although the story of cycling in the Netherlands is partly a historical accident, the current levels of cycling in the country simply would not have been maintained without serious, concerted action, action that made it a viable mode of transport for everyone at a time of rapid expansion in the use of the private motor car. As David Hembrow argues, cycling should not be treated with complacency. It is not ‘in the blood’, or innate to the Netherlands, just because everyone cycles, or because there is a long history of cycling in the country. It can, and will, decline if it is not cared for.

While older parts of the Dutch road network are still waiting to be redesigned to make cycling safe and attractive, and while mistakes in designs can happen, it’s troubling to see cycling effectively being ignored in new Dutch road designs, and well-established, proven principles of road design being ignored or abandoned.

This entry was posted in placefaking, Safety, Sustainable Safety, The Netherlands. Bookmark the permalink.