No, cycling infrastructure in London is not creating a ‘race track’ mentality

Last autumn, my partner and I cycled together in London. It was her very first time cycling in the capital. I think it’s more than fair to describe her as a nervous cyclist – while she cycled in her youth, the bike was pretty much discarded once she became a teenager, and she only started again, intermittently, several decades later, on holiday trips we took to the Netherlands.

On one of our Dutch cycling trips

Given her nervousness, the very first bit of road we ended up cycling on in London would have been an absolutely crazy choice five years ago. Upper Thames Street, a four lane canyon of motor traffic running straight through the City of London, is (or at least was) notorious for danger. The cycle courier Sebastian Lukomski was killed here in 2004, crushed under an HGV, a death that Bill Chidley identifies with the start of the politicisation of cycling safety in London. In 2008, Nick Wright was killed a matter of yards from where Lukomski died – again, crushed under the wheels of an HGV. And these horrible collisions kept happening. Again in 2013. And again in 2014. All on the same stretch of road.

But last autumn we cycled along this very same road, in almost complete safety. At rush hour.

To state the obvious, I can guarantee you that there was no way this would have happened, without the subjective and objective safety offered by the protected cycleway, which meant we did not have to cycle down this canyon, mixed in with HGVs, coaches, vans and cars. We had our own space, where we could trundle on our fully-laden Dutch bikes at a sedate 10mph, roughly the same speed as the slow moving motor traffic on the other side of the kerb.

Without that kerb, I don’t think there is any chance that this young child would be cycling along Upper Thames Street either. 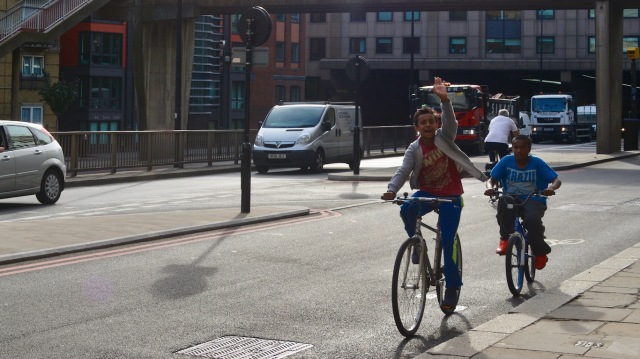 The crucial difference the cycleway has made is that people are now free to cycle at their own pace. Just like my partner, they can trundle along fairly slowly, without worrying about HGVs and coaches steaming up behind them. The cycleway has enabled, and will enable, people to cycle at slower speeds – the very people who would never even have considered cycling here, and on similar roads, without it.

It’s more than a little troubling, therefore, to see an emerging narrative that these kinds of cycleways are ‘creating’ a mentality of fast cycling – that their design (and even their name), are somehow fomenting or encouraging a type of cycling that wouldn’t exist if the cycling infrastructure hadn’t been built.

It's entirely possible this thread will set me off on a cycle super-highway rant again.

I mean you can just feel the testosterone in the name. Never mind the appalling design and behaviour they encourage in cyclists who use them. (I am a cyclist).

The latest example is a piece from Jill Rutter for Reaction. The piece makes very some sensible arguments, but has had a silly headline added (at a guess, by an editor who has previously demonstrated some antagonism towards cycling infrastructure in London), and unfortunately creates the overall impression that safe, attractive and convenient cycling infrastructure, rather than enabling nervous people to cycle, is instead fostering a problem of fast and aggressive cycling. This impression was slightly reinforced by some comments the author later made on social media.

Hi Will – not sure if you read my piece in @reactionlife https://t.co/zST6mIcnPC — was discussing with other (female cycling) friends – who said they wd oppose @TfL new infra because of the racer mentality it created..

Unlike those journalists and politicians who are opponents of cycleways and would like to see it removed, and who are therefore making these kinds of arguments about ‘racing culture’ in bad faith, it’s pretty clear to me that Rutter is sincere. She supports cycling infrastructure, wants to see more of it, but is troubled personally by the types of cycling she is seeing at the moment, and worries that it may be putting people off cycling in London.

The problem is that new cycling infrastructure is obviously not ‘creating’ a racing mentality. That mentality is created not by the few miles of safe cycling conditions that have been built in central London, but by the abject reality of the rest of the road network, which does involve mixing with fast motor traffic, and large vehicles, on dreadfully-designed junctions and roads that make no concession whatsoever to the safety of people cycling. The ‘superhighways’ aren’t the reality of cycling in London – they’re only a small respite from it.

We haven’t suddenly transplanted the Netherlands onto London. We’ve built a few miles of good stuff, in pockets here and there, often without even joining it up, and… that’s it. The aggressive, fast people we encounter on ‘superhighways’  are the people who were cycling already, the people who will almost certainly be cycling without the subjective safety offered by motor traffic-free conditions.

Plainly, we shouldn’t be musing about why we haven’t got a demographic of relaxed, Dutch-type cycling in London when we’ve barely started changing our roads. We haven’t even scratched the surface. Let’s not start pretending that the infrastructure which allows my friends, family and partner to cycle slowly, and in safety, is somehow encouraging or fostering a type of cycling that is in reality a natural consequence of the rest of the road network.

7 Responses to No, cycling infrastructure in London is not creating a ‘race track’ mentality