Why we need space for cycling

Posted on September 1, 2013 by aseasyasriding

Ahead of today’s parliamentary debate on cycling, and subsequent Space for Cycling protest, I thought I’d give a brief reminder of why change is so urgently needed in Britain, and to persuade you to come along to the ride.

The first graph, below, shows the percentage of all trips made by bike – split by age group – in the Netherlands and the UK (click to enlarge) –

The young and the old in the Netherlands have considerably more freedom than in Britain. The young can travel independently, without having to rely on parents to ferry them about, as can the elderly, without relying on public transport, or cars which they no longer feel confident driving.

The percentage of short trips made by motor vehicle (either as driver or passenger) in Britain is huge. 55% of trips under 5 miles in Britain are made by car, and nearly 40% of trips under 2 miles are driven. This is a distance that can easily be cycled in less than 15 minutes.

By contrast, the percentage of short trips made by bicycle, to the same scale –

A tiny percentage of all trips, even at these short distances. 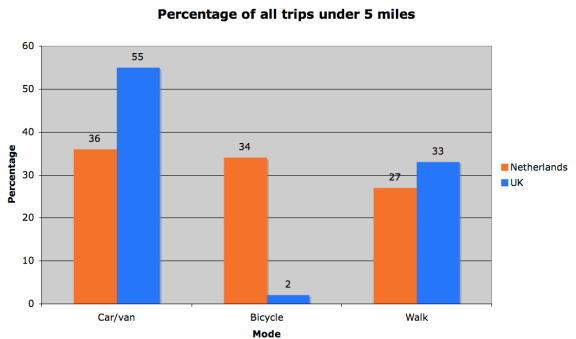 Walking rates are broadly similar between the two countries, but while 34% of all trips under 7.5km are cycled by the Dutch, just 2% are cycled in Britain. The balance between car use and bicycle use for trips under this distance is remarkable, compared to the total imbalance in Britain.

The volatility in the data is a consequence of the small number of bike trips being made by those in the NTS survey. But it’s quite obvious that cycling isn’t going anywhere in Britain, despite the distance travelled by bike increasing substantially in recent years.

Cycle use among British children is stagnant, while the use of cars to drive them around remains stubbornly high – higher than in the 1990s. 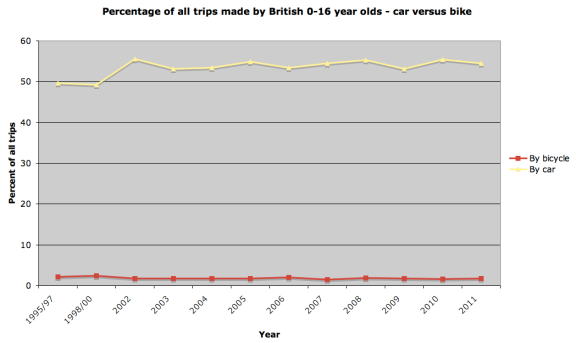 These statistics paint a picture of continuing failure. The reasons for this failure are not hard to discern.

It’s not because we’re a lazy nation, or because we have any kind of antipathy to cycling. There’s plenty of evidence that when conditions are right, British people will cycle in their tens of thousands, even if it means considerable effort just to get to those places where they can cycle in comfort and safety. Cycling gives children freedom and independence, and yet so few are currently able to do so on a regular day-to-day basis. 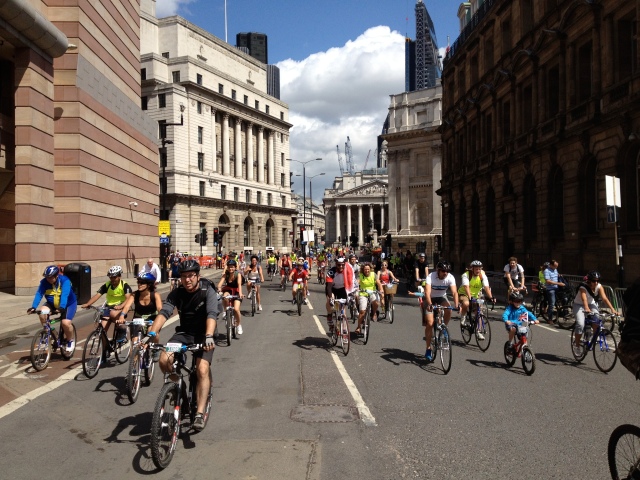 Nor are we wedded to our cars. For urban journeys they are often stressful, costly and inconvenient. Britain fell out of love with motoring a long time ago, but most people do not have a reasonable alternative for many short trips.

All the evidence suggests that there is enormous suppressed demand for cycling, suppressed by the physical conditions in which cycling currently has to be undertaken. People who want to use bikes to make short trips are confronted by a stark choice between cycling in motor traffic, or using poorly-designed ‘infrastructure’ that puts them into conflict with pedestrians, abandons them at random, and makes their journeys circuitous and awkward.

This has to change, not just for the sake of people who currently cycle, or those who want to, but for everyone. For motorists, whose journeys will be made easier with less traffic on the roads; for anyone who wants to see our villages, towns and cities become vibrant, thriving and pleasant places; for our own health and wellbeing.

That’s why I’m going to be in London this evening. I hope you can join me and thousands of others.

18 Responses to Why we need space for cycling