The problem with (British) zebra crossings

Zebra crossings are, in principle, the ideal way for pedestrians to cross the road. They give pedestrians priority, and mean they can cross without delay.

But there are a number of regulatory difficulties which make them rather less than ideal. The first is the absurd requirement that every single zebra crossing has to have two Belisha beacons at either end of it, to make it ‘visible’ to drivers. Trying to implement Dutch-style infrastructure under UK rules would result in a complete forest of these beacons – amply demonstrated by the TRL trial of a Dutch roundabout.

European countries are quite capable of implementing zebras without these ugly poles. In France –

And of course in the Netherlands –

Simple crossings that consist of nothing more than paint.

These continental zebras also do not have the ‘zig-zag’ markings on either side of the crossing, that are compulsory in the UK. This ‘extra’ marking not only uglifies the street, like the Belisha beacon – it also presents practical difficulties.

The minimum requirement is just two zig-zags – a ‘zig’ and a ‘zag’. Even this means that zebra crossings will inevitably be displaced from desire lines. Unlike in the French and Swiss examples, above, where the crossing goes from corner to corner, UK zebras have to be set back from junction mouths. Nor, on main roads, can they be placed by junctions with side roads, meaning extra delay and inconvenience for pedestrians.

And, from a cycling perspective, this ‘zig-zag’ rule is also inconvenient. It means that  crossings for cycling cannot be placed directly adjacent to zebra crossings, either across main roads, or across side roads. 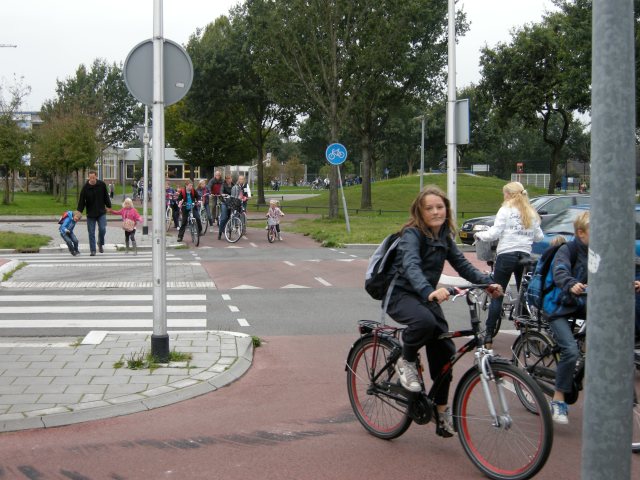 Side road crossing, with zebra

Under the current rules, placing cycle tracks and zebras around the perimeter of a roundabout means that the zebra crossing is significantly displaced from the natural desire lines, as shown in this mock-up for the Cycling Embassy of a legal perimeter track.

From the Cycling Embassy blog

So these rules about zebras really need to be simplified, so we can have straightforward crossings without all the paraphernalia of beacons and markings.

The other serious problem with zebras involves the rules governing their use. Here’s the relevant passage from the Highway Code, with what I consider to be an unhelpful rule underlined.

That is, drivers have to give way only after the pedestrian has moved onto the crossing, not before – not, for instance, when the pedestrian is waiting to cross.

What does this mean in practice? To give an example from just yesterday, I watched an elderly lady waiting to cross a road, standing on the pavement at a zebra. Because she didn’t step out onto the crossing, no driver stopped. About five cars passed, despite her clearly waiting to cross, as I approached.

As someone who cycles in traffic on a day-to-day basis, naturally I had no qualms about striding out straight onto the crossing the lady was waiting at (it helps if you have a bicycle with you, to wheel out in front of you), commanding, or rather daring, the oncoming drivers to stop, which they did – just about. She didn’t follow me, however.

But this is the problem with Rule 193. Because priority only arrives after you step onto the crossing, Rule 193 expects people waiting to cross the road on a zebra to effectively play chicken with approaching motor vehicles. This is not something people are willing to do. Given the choice between just waiting for a gap in traffic to materialise, and stepping out in front of a driver and hoping they will stop, I suspect most will simply wait for a gap, as the elderly lady did yesterday. Indeed, this (quite rational) preference is reinforced by official advice.

‘Never assume traffic will stop’ (or rather ‘never assume drivers will stop’) means zebras only effectively become useful when there are gaps in traffic. People simply don’t want to chance it. They wait on the pavement – and that means no driver has to yield for them.

Rule 19 in the Highway Code effectively encapsulates this gaping hole in the rules.

It’s not surprising therefore that, as I understand it, pelican or toucan crossings are preferred by the general public, because while delay is  involved, the signals give a degree of certainty that drivers will stop – albeit a certainty that is often misplaced.

So, in essence,  Britain’s traffic rules have managed to seriously wound a sensible and straightforward way of crossing the road. I suppose we should pat ourselves on the back.

This entry was posted in Infrastructure, Walking, Zebra crossings. Bookmark the permalink.

131 Responses to The problem with (British) zebra crossings