The power of e-bikes

Posted on February 29, 2020 by aseasyasriding

On a sunny September day last year, I headed out from the city centre of Utrecht to take a look at the town of Bilthoven, about five miles away. Despite being a fairly small settlement (Bilthoven itself only has a population of around 20,000 people, although it closely adjoins the larger town of De Bilt) the area around the station has been extensively redeveloped, with the road diverted, and a new underpass built that only allows walking and cycling.

This is the railway station for a town of just over 20,000 people. pic.twitter.com/g1P0lG9vEi

I had arranged to meet my partner back in Utrecht city centre at midday (she wasn’t quite as interested in me in pedalling around ten miles to go and look at some cycle paths and new development!), and I was running a bit late, stopping off to take videos of roundabouts and cycle paths on the way.

Cycle path running parallel to main road, on the approach to Bilthoven.
The path is actually built in the woods, some distance from the road. It has its own street lighting. It then crosses a bridge, before skirting a roundabout (with priority). Just brilliant. pic.twitter.com/tlOPg244DU

Fortunately, on my route back, I stopped at a red light in de Bilt behind a lady on an e-bike, with distinctive bright green panniers.

I say ‘fortunately’ because over my years cycling in the Netherlands, I’ve found people on e-bikes are a real bonus when you are cycling along on a human-powered bike. You can tuck into their slipstream and roll along at a fairly steady 15mph, a speed which would take some effort to sustain on a heavy utility bike if you are cycling on your own. The couple in the photograph below, pedalling along effortlessly on their e-bikes, were an absolute godsend on a baking hot day when I was struggling towards Delft along a dead straight and seemingly unending road. 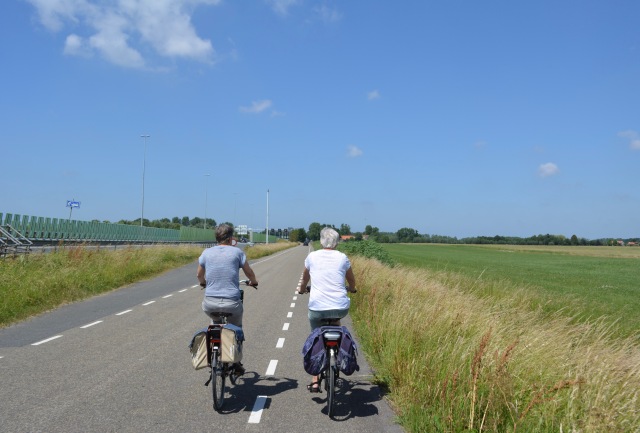 There’s no need to feel guilty about drafting either, because the person on the e-bike is expending very little effort acting while they act as your personal windbreak.

On my way back to Utrecht, it turned out that I managed to get a very pleasant tow all the way back to the city centre. Here we are, just leaving De Bilt, on the quiet road that runs through the town centre (the main through-road is behind the hedge to the left). 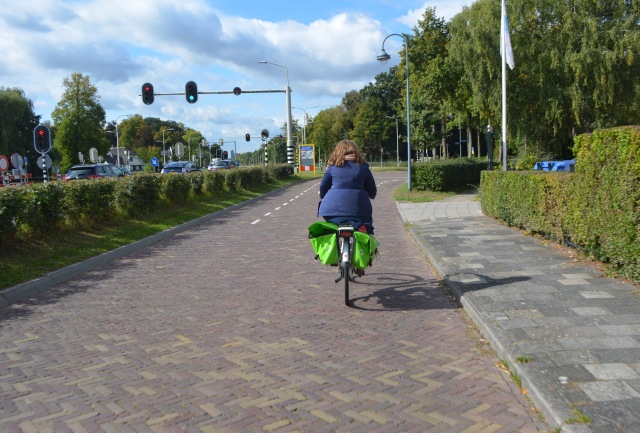 Then along the service road that runs parallel to the main road. (Note the induction loops built into the asphalt, that almost always ensure you have a green signal as you approach these minor junctions). 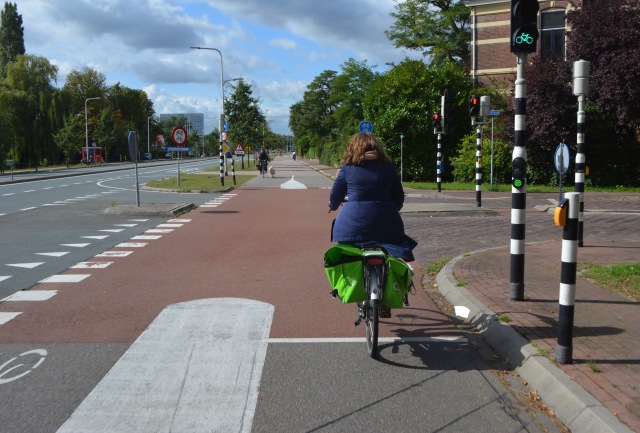 And then under the famous ‘Bear pit’ junction on the outskirts of the city centre. 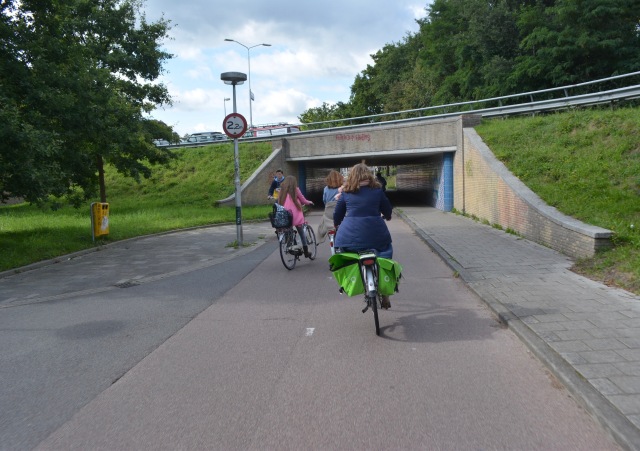 Now on Biltstraat, heading into the centre of Utrecht, on a protected cycleway. The road here is only one-way for private motor traffic, with a two-way bus lane off to the left. 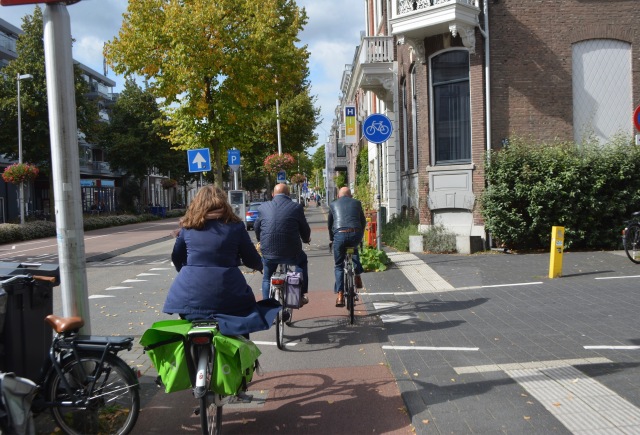 Soon after this, the lady gets away from me a bit because… she jumped a red light – a pretty minor violation given the traffic context, but I didn’t want to risk it myself. 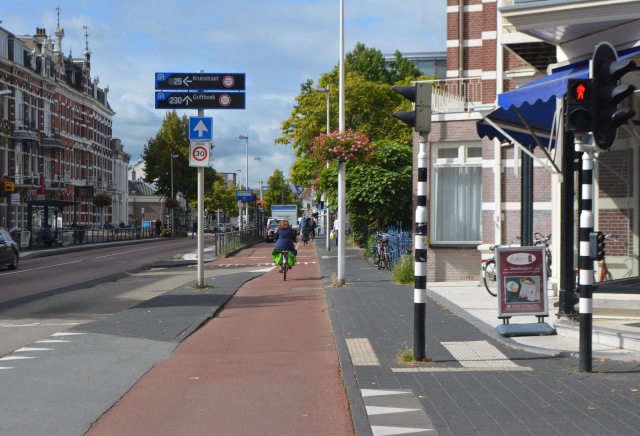 She didn’t gain much advantage from her light jump, however, because soon enough I caught her up again, right into the city centre, along the busiest cycle path in the Netherlands (if not in the world) – 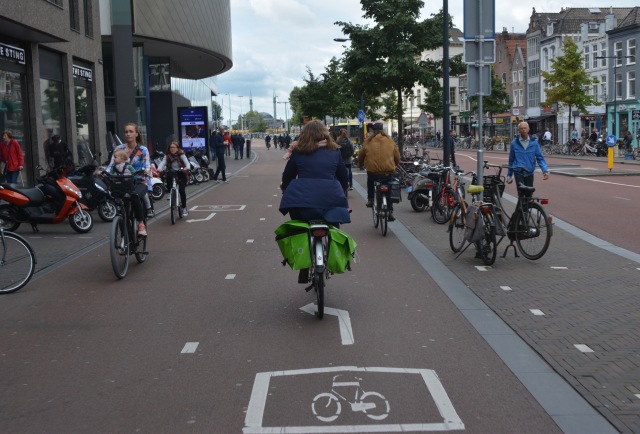 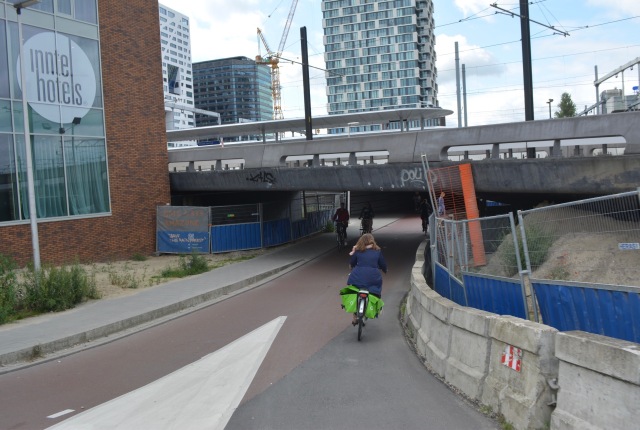 Before our journeys separate, and she peels off to join the cycle parking at the station itself – presumably to catch a train. 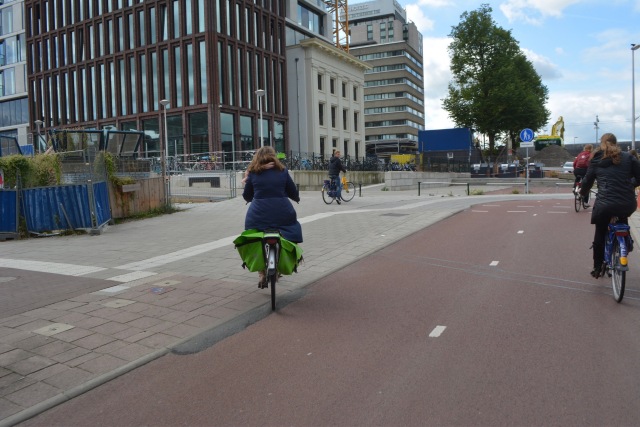 We travelled 6km together, nearly four miles, and according to my GPS track we did it in a little over 14 minutes, right from the eastern side of de Bilt, to the railway station in the city centre of Utrecht. 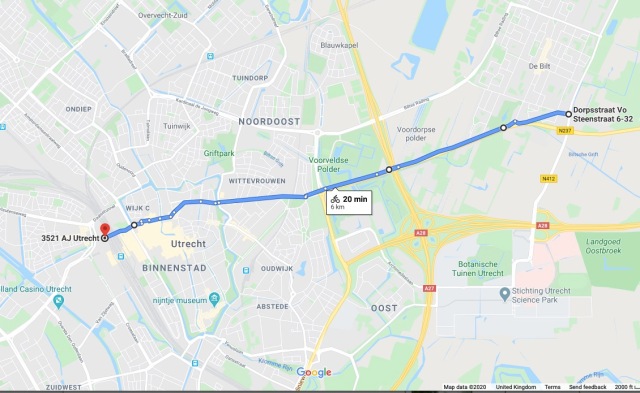 Perhaps unsurprisingly, this works out at an average speed of a fraction over fifteen miles an hour, or 25kph, the legal limit for e-bikes. We only had to stop twice – at the red light I stopped for, and she didn’t, and then to cross Vredenburg.

Given the point at which we met, she had almost certainly come from even further away, either from Bilthoven, where I started, or from Zeist. These are both around five miles away, but at e-bike speeds, only twenty minutes or so from the centre of Utrecht. Indeed, 5 miles can be covered in exactly 20 minutes on an e-bike, which means that a huge area is within a negligible cycling time of both the city centre and the train station – pretty much the whole Utrecht agglomeration (well over half a million people), as well as other outlying towns and villages. 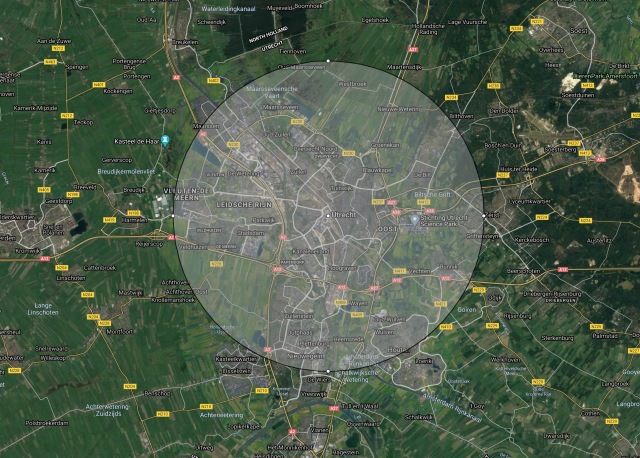 A five mile radius circle, centred on Utrecht train station. At e-bike speeds, it would take just twenty minutes to cover this distance.

That’s pretty remarkable when you think about it – that all these people are (potentially) less than twenty minutes away from the centre of the city, and able to get there in comfort and safety, with minimal inconvenience, just by pedalling, and without any need for a car. When you consider that these trips can then be made in combination with the Netherlands’ excellent rail network, vast swathes of the country are quickly within reach to people even in apparently ‘remote’ areas. Hypothetically, the lady I was following could have come from a remote village miles away from Utrecht, caught a train to Rotterdam, and have gone from door-to-door in less than an hour.

Naturally, these benefits accrue to people on ‘ordinary’ bikes too – people like me – although 5 miles is more likely to take 30 minutes or more to cover, under our own steam. That’s an entirely manageable distance, but e-bikes will obviously reduce the effort required. It has the potential to seriously start eating into those longer car trips that are not quite so appealing by bike.

In the UK we can only dream of having the kind of comprehensive, high-quality cycling networks that surround places like Utrecht, and that enable the types of journeys described here. Where I live, we have absolutely no meaningful cycle network to speak of, and a negligible rail network. Even our former railway lines – which could serve as excellent, flat connections between towns and villages, either by bike or e-bike – have been allowed to disintegrate into bumpy, muddy bogs that are unattractive and unpleasant to use. 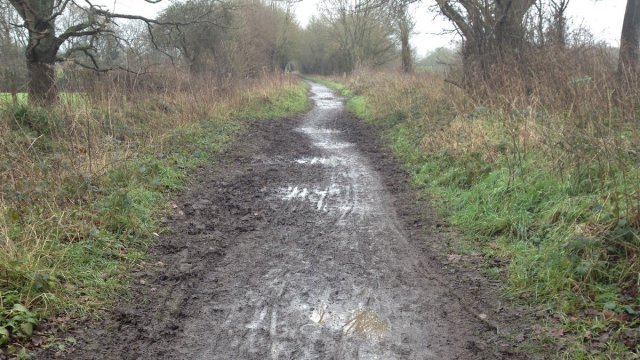 A section of the former Horsham-Shoreham railway line, north of Partridge Green

Meanwhile our roads are increasingly clogged with dangerous, polluting and environmentally damaging motor vehicles, travelling in the vast majority of cases short trips that could be converted to other modes.

There is no reason why we can’t match the Netherlands. E-bikes erode the argument that it is too hilly, or too difficult, to cycle, and in combination with high quality cycle networks we could have people effortlessly travelling the kinds of distances described in this post.

5 Responses to The power of e-bikes