Posted on November 13, 2013 by aseasyasriding

One of the interesting points that is often raised with regard to the potential of cycling in London is that it is a big city – at least, substantially bigger than continental cities where cycling forms a large proportion of journeys.

Take this example from the Mayor’s Cycling Commissioner, Andrew Gilligan, interviewed by Portland to Portland earlier this year.

We have to learn some of the lessons from Amsterdam about how it is possible to have a city where there are enormous levels of bike usage. We’re never going to be quite as good as that, I don’t think – 30%, 35% of all journeys in Amsterdam are made by bike. London’s a lot bigger, a lot busier. But we can get up towards their kind of levels, by doing some of the same things they’ve been doing.

That is, the very size of London – ‘a lot bigger’ – is a reason why we can’t get near the cycling levels of a city like Amsterdam. The same claim – or variants thereof – can be found in forums –

London is a city of nine million people. Copenhagen is half the size of Birmingham. London’s CBD stretches from Paddington Basin to Westfield.- getting on for nine miles. Copenhagen is endless suburb. (And, frankly I’d rather live in Beirut than Copenhagen.)

These assertions of unsuitability seem to hinge on an assumption that in larger cities, people make longer trips, that their journeys get ‘stretched’, by comparison with smaller cities. These longer trips are less suited to cycling. But how much truth is there in these kinds of claims? How long are trips in London?

Joe Dunckley has put the journey lengths from the National Travel Survey into graphical form, including a bar for London. 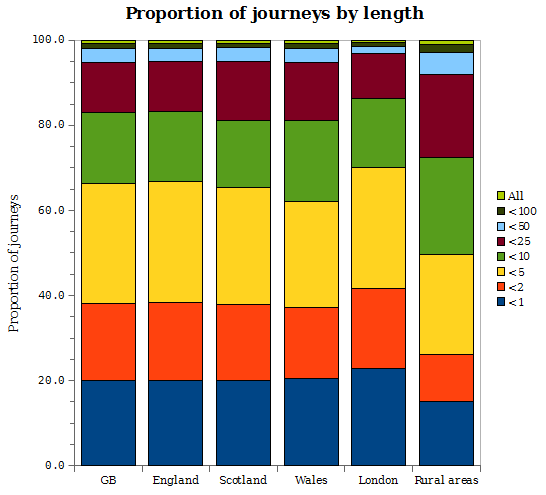 We also know – from Transport for London’s own data – that a huge proportion of car trips in London are exceptionally short.

Despite London’s size, then, car trips remain very short, for the most part. Again, these are trips of a length that can – and undoubtedly should – be cycled, or walked, if conditions are attractive.

So it seems fairly clear that the barriers to mass cycling in London are not related to its overall size, which does not seem to have a bearing on the length of trips made within it. The majority of trips in London are short, especially those made by private car.

I wasn’t able to find information on trip lengths in Copenhagen, or in Dutch cities. If anyone has any links, please supply them, and I can include the figures in this post.

This entry was posted in Andrew Gilligan, Car dependence, London, Modal share, The Netherlands, Transport for London. Bookmark the permalink.

23 Responses to Does size matter?