Total inconsistency from the Royal Parks

Posted on February 11, 2015 by aseasyasriding

I can’t really add much to Cyclists in the City’s excellent and thorough analysis of the problems facing the East-West Superhighway route through the Royal Parks – problems, it seems, that are entirely being caused by the Royal Parks themselves, as the Evening Standard reports.

But I would like to examine the apparent rationale tharee Royal Parks are advancing for blocking a separated route for cycling, on the existing carriageway – a route that would look like this, in the visualisation that Transport for London have already prepared. 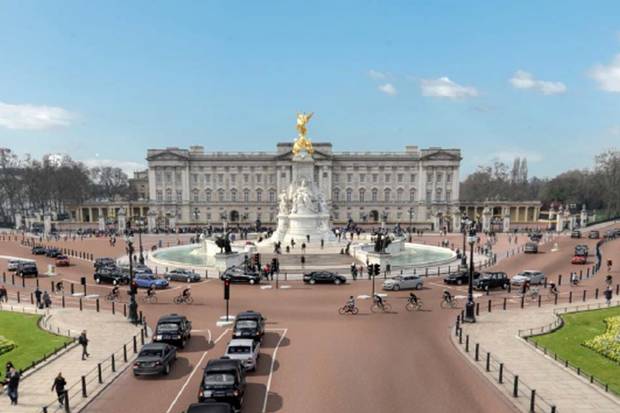 How the route would look, if it wasn’t being blocked by the Royal Parks

As is clear from this visualisation, the route would run on existing road space, separated from motor traffic by what look like removable wands, visible on the right of the image.

It is very important to note here that the Royal Parks are not actually objecting to the principle of a Superhighway running through this area; their objection is specifically about the form cycling provision should take.

As the Superhighway comes down Constitution Hill, instead of running it on the road, the Royal Parks want the route to pass directly through this area of shared use, shown below, at the foot of Green Park. 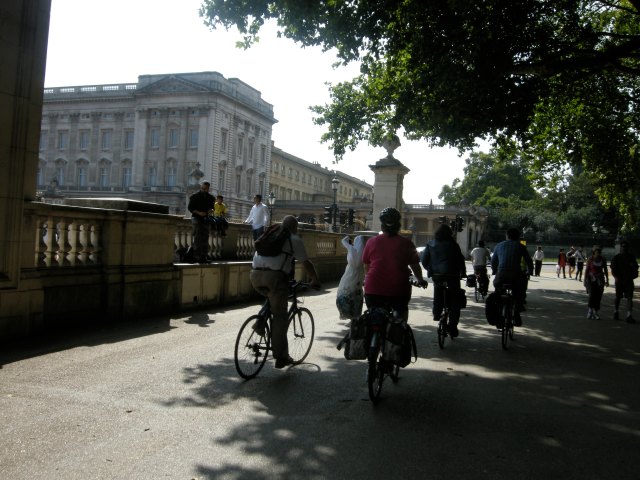 The existing area of shared use at the south side of Green Park. This is where the Royal Parks want the Superhighway to go.

This is already a very busy area, heaving with pedestrians who are coming to and from the Palace, or making their way from Hyde Park into central London. I don’t think mixing cycling and walking here works at all, even at present – the numbers of people walking and cycling here are just too high.

Yet the Royal Parks are apparently proposing that this shared footway is appropriate for what will likely be one the busiest cycle routes in London, pushing more people cycling into this area.

It makes absolutely no sense whatsoever, especially when – just over that wall, visible in the picture above – there is an ocean of road space that could quite easily be used for a protected cycle route, without having any effect on motor traffic, while simultaneously keeping cycling and walking separated from each other at this very busy location. 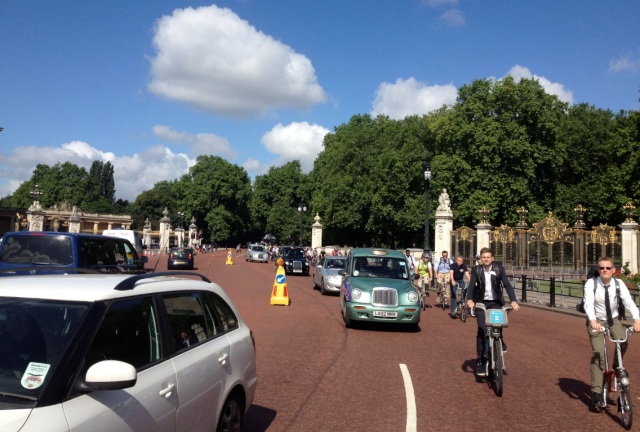 The 2014 Parliamentary Bike Ride, passing along TfL’s preferred route for the Superhighway. As you can see, there is a vast expanse of tarmac here that can easily accommodate a cycling route.

Locating the cycling route here would therefore actually represent a considerable improvement for pedestrians, because cycling would no longer be mixed in with walking on the existing shared use footway. These issues are summarised very well by Andrew Gilligan in the early part of this BBC report from Tom Edwards.

So what is the reasoning the Royal Parks are employing for blocking a segregated track on the road, and insisting that the crap status quo should be maintained (and indeed worsened, through the addition of more cycle traffic into a shared use area)?

All we have to go on at present are the minutes of their Board meeting back in December, at which Andrew Gilligan and Transport for London representatives were present (thanks to Jon Stone, for uploading them) –

TfL set out the consultation concept designs for the east-west cycle superhighway within the Royal Parks. The Board agreed that TfL could undertake public consultation on the proposed road based scheme through Hyde Park. The proposals for St James and Green Parks were not satisfactory for safety, operational and aesthetic reasons. The Board asked TfL to look again at the concept design and come back with revisions and mitigations.

I have to say it is not especially clear why an expanse of tarmac is more aesthetically pleasing if it is entirely used for motor traffic – perhaps the Royal Parks could provide more explanation. The ‘operational’ reasons don’t make a great deal of sense either, as we’ve known for some time that the segregation at this location would have to be removable, for events.

As for ‘safety’, it makes absolutely no sense whatsoever to pretend that running a busy cycle route directly through an area of footway used by huge numbers of pedestrians is safer than separating that cycle route from those pedestrians, by using excess carriageway space.

In response to Royal Parks Agency concerns about pedestrians, the superhighway will not run on Rotten Row

Because of… concerns about pedestrians!

How can the Royal Parks profess concern for conflict between walking and cycling in Hyde Park, while simultaneously blocking a Superhighway route by Buckingham Palace that would serve to remove that conflict?

18 Responses to Total inconsistency from the Royal Parks