Posted on September 18, 2015 by aseasyasriding

Way back in 2003, the north side of Trafalgar Square – the portion in front of the National Gallery – was pedestrianised, with the road running in front of the gallery, that severed it from the square, removed.

Before the scheme was even implemented, it was ‘feared’ that gridlock would result, and indeed gridlock in the area continues to be blamed on the closure of this small stretch of road, particularly by cab drivers.

But even before this section of square was pedestrianised, gridlock still occurred. 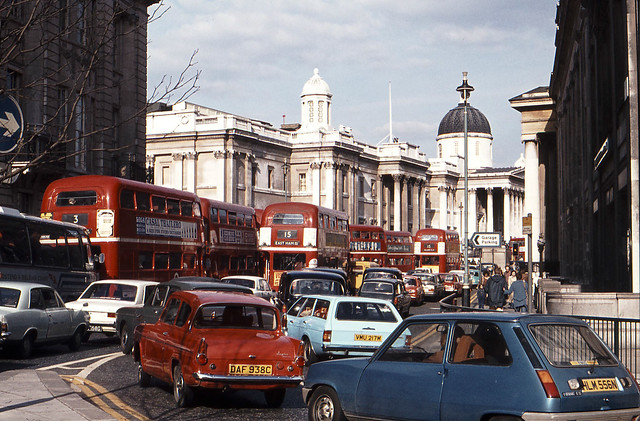 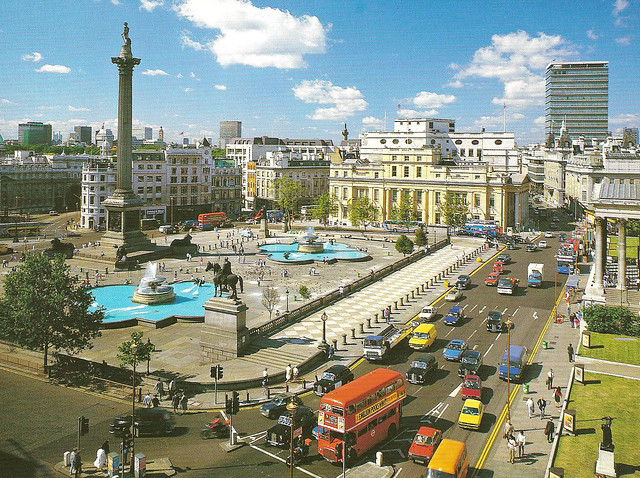 Trafalgar Square has always been clogged, even as far back as the 1940s. 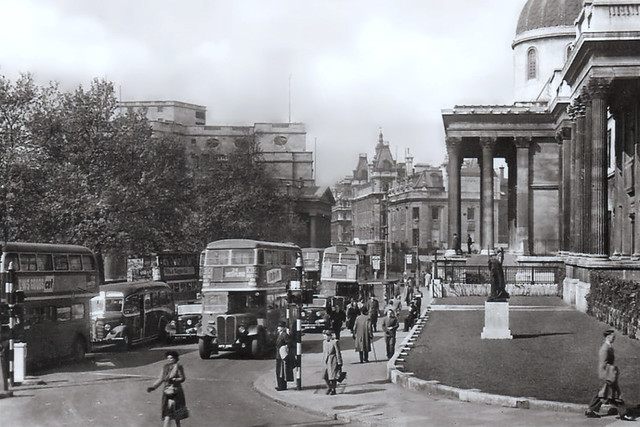 If this short stretch of road in front of the National Gallery were to be reopened to motor traffic, perhaps motor traffic in the area might flow more freely for a short period, but after a while the ‘extra’ road space would inevitably fill up again, returning the square to its previously clogged state.

The problem is that drivers in London don’t see things this way; the congestion they are sitting in must have been ’caused’ by this or that closure; that subtle change to the way the roads are arranged; that extra bit of pavement that’s been created; or, pertinently, that new bit of cycle infrastructure.

2) Every queue of traffic once the Cycle Superhighways have been complete will be credited to them. After all, there were no queues before.

This applies outside London too, of course. The inner ring road in Horsham has recently been subject to roadworks – minor changes to install a better pedestrian crossing – reducing its four or five lane width to just two lanes, in places.

Inevitably, these temporary changes are alleged have ’caused’ gridlock.

This overlooks the fact that roads in the town are regularly congested, even in the absence of roadworks. Again, demand outstrips supply, so people driving on roads in Horsham have in a sense ‘adapted’ themselves to the available supply of road space. We are seeing the temporary effects of some reduction in that supply. I say ‘temporary’ for a couple of reasons.

Firstly, these roadworks are on a road that didn’t even exist until the mid-1990s. It was bulldozed through, demolishing buildings, to bypass an existing two-lane road, and to open up access to a new Sainsbury’s supermarket. So it’s entirely possible to argue that traffic capacity – even with the roadworks – is still greater than it was in 1995. The new, wider road, has just been filled up in much the same way as the old one was; the difference is that this new road is four lanes wide, rather than two lanes wide. The roadworks – which are visible from your car, as you sit, stationary, in congestion, appear to be the proximate cause of your delay, but in reality motor traffic congestion is inevitable in urban areas. The number of people who might want to drive outstrips the amount of space we can give them, or at least should be willing to give them, without destroying the fabric of our towns and cities.

Problematically, this kind of behaviour is not addressed by modelling of road- and junction-changes. For instance, the ‘delay’ forecasts produced by Transport for London for the new Superhighways – which generated alarming headlines – assumed that people’s behaviour was fixed. That they would not change their time of travel, their route, or even their mode of transport.

Short-term increases in congestion caused by lane closures due to roadworks, or permanent reallocation of road space, will inevitably smooth out over time as people adapt, even if at the time it is apparently ‘obvious’ that those changes have created a ‘gridlock’ that would exist anyway.

17 Responses to Gridlock, and confirmation bias