As you are perhaps aware, I visited Bow roundabout recently (as did a couple of other bloggers) to see first hand how Transport for London’s new ‘Cycle Priority Lights’ are working. My conclusion – indeed the universal conclusion – seems to be, they’re not working very well.

The principal issue is the turning conflict between vehicles turning left onto the A12, and cyclists wishing to proceed straight on. It is precisely this problem that TfL have attempted to solve, but their ‘solution’ is a complete fudge because it does not separate out sufficiently these movements. Far from being a ‘priority’ light for cyclists, the real purpose of the confusing array of traffic lights is to stop cyclists while all vehicles are moving across the roundabout, only letting them into an ASL-like area when the traffic alongside them is stopped.

The best solution, of course, would be to hold left-turning vehicles while cyclists,  pedestrians (who, let’s not forget, still do not have a crossing here) and vehicles going straight on or right proceed onto the roundabout. This would allow cyclists to be segregated from traffic right up to and across the roundabout, rather than the current partial and confusing approach.

I made this point in that post; that what really needs to be done is to put motor vehicles into two separate streams, so pedestrians can cross the road, and cyclists’ movements are properly separated. That is, the Dutch approach to these kinds of road designs.

The Dutch way. It would be nice, but none of us will live to see that Utopia here. To build that stuff – and to enforce the laws that make it work – you need political will. That needs votes. And not enough people cycle for that.

The argument being that we need to get more people cycling before we can start lobbying for proper infrastructure, or for the infrastructure that is currently being built to be designed to higher standards. Forget your ‘utopias’; it will never happen until we build a mass cycling culture all by ourselves.

I’m not sure that’s true. Even if we ignore the fact that infrastructure of greatly varying quality for cyclists is already being built, and that our standards can greatly be improved, effective lobbying can work. The most prominent example is London Cycling Campaign managed to get all of the mayoral candidates to sign up to Go Dutch. Now we can doubt Boris’s sincerity, and his willingness to act, but for the first time, politicians are making commitments, rather than fob-offs, or simply ignoring cycling altogether. The same is true of Pedal on Parliament in Scotland, where, like in London, people got out on the streets and demanded change.

The correct response is surely to demand better, to show how things can and do work elsewhere, and to campaign for it, not to make Eeyore-ish noises about the likelihood of success, and to give up before we’ve even started.

As it happens, there is an example of how turning conflicts on a busy gyratory might be eliminated right here in the UK, one that will involve reducing three vehicle lanes down to two to make space for a wider cycle lane and a separate traffic phase for bicycles – the Vogue Gyratory on Lewes Road in Brighton.

I visited it in May, cycling north from the city centre out towards the University. It’s a fairly horrible road layout of the kind familiar to those who cycle in London.

The video shows the problems. Narrow cycle lanes on entry and exit, placed right up against railings, with no real protection from vehicles which can pass very close. We also have a three-lane arrangement on the gyratory itself, which presents cyclists with the choice of sticking in lane 2 to go straight on, or sticking in lane 1 and then attempting to make it back across to lane 2 at the lights; rather dangerous, but I suspect the favoured approach for those not confident enough to ‘take the lane’ on a gyratory.

And here’s how it will – hopefully – change. 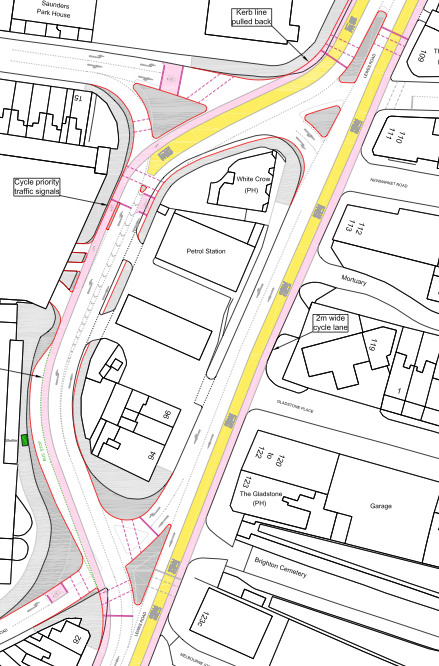 I cycled from the bottom of this map, to the top right. The cycle lane will be widened to two metres. This space will come at the expense of (queuing) vehicle lanes on the gyratory, which will be reduced from three to two.

The corner on the entry to the gyatory will be rounded off, to make room for the wider cycle lane.

On the exit, again the corner has been rounded off, and the cycle lane placed inside a new bus lane, which will come at the expense of one the vehicle lanes. This is a better arrangement (although buses could encroach into the lane as they take the corner – I hope the width and angle are sufficient).

Finally, at the point of conflict, cyclists will have a separate traffic phase. Vehicles turning left will be held, while cyclists going straight on can proceed, in safety.

It is precisely this kind of separation of motor vehicle movements that is required at Bow.

The arrangement is far from ideal, it is true; cycling close to buses in the bus lane is not a great experience, especially given that the cycle lane runs outside the bus stop in the gryatory itself, rather than behind it. I would have liked to have seen more physical separation. I also wonder about the timings on the lights, which might prioritise left-turning motor vehicles over cyclists wishing to proceed straight on.

Nevertheless, it is a great step forward from the previous arrangement, seen in the video, and shows what can and should be done at Bow. Change can happen, even with very low cycling numbers (it’s also happening on the Old Shoreham Road in Brighton).

Let’s not wait before asking for more.

Thanks to Mark Strong for some background to this post

This entry was posted in Bow Roundabout, Brighton, Infrastructure. Bookmark the permalink.

5 Responses to The Vogue Gyratory, Brighton