Where are Britain’s practical bikes?

Posted on July 1, 2013 by aseasyasriding

One of the many impressions from my recent trip to the Netherlands is how everybody rides pretty much the same bike. 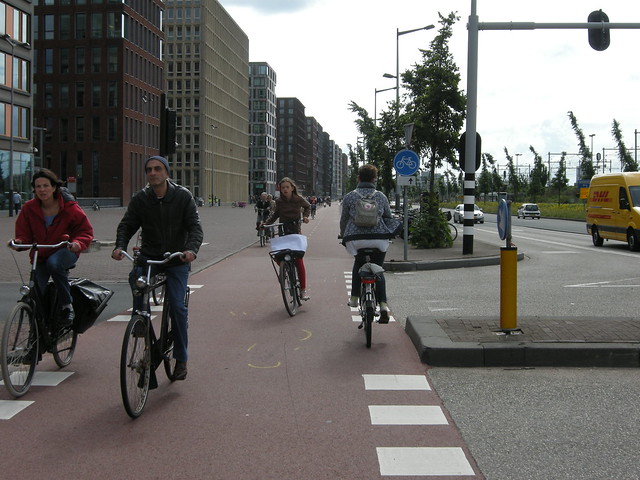 This is the basic – and pretty indestructible – classic Dutch bike. It’s either single speed, or has hub gears; it has a chain guard and an integral lock; it has lighting built onto it; the brakes are either drum brakes, or back-pedal only; it has mudguards and a rear rack, heavy duty tyres, and is generally built like a tank.

I can vouch for this durability. I’ve had a Dutch bike of my own now for about 18 months, and in that time, I haven’t done any maintenance on it all, apart from occasionally pumping up the tyres, and a simple adjustment of the gear cable.

It strikes me that Dutch bikes – and they way they get used – are analogous to the cars, and the way we use them. Modern cars don’t require much (or indeed any) maintenance from their users. They are designed to be stress-free to operate; if something does go wrong, you take it to a garage. Similarly Dutch bikes do not required maintenance – if and when something does go wrong, the Dutch generally take their bike to their nearest shop.

And, in precisely the same way that you can operate a car in your ordinary everyday clothes, so you can just hop on and hop off these bikes in whatever you happen to be wearing. They are designed to fit around you, rather than requiring you to adapt to the bike.

This isn’t true of the bikes we ride in Britain, which I think fall almost entirely into three categories

The first two do not have any of the features that would make them practical. They have exposed chains and transmission; they have derailleur gears, which are tricky to maintain; their cabling is also often exposed to the elements; the tyres are prone to puncturing; and they do not come with essential features like mudguards, racks, built-on lighting, or integral locks.

Much the same is also true for hybrids, which quite often look like this –

Indeed, I was prompted to write this post by a handout given to me during a lecture by Rachel Aldred last week, discussing barriers and impediments to cycling in Britain.

The subject of this particular handout was, as you can see, ‘Stuff’ – about how riding a bike in Britain requires a huge array of extra equipment that either has to be taken on or off the bike, or worn, which makes riding a bike unnecessarily inconvenient and complicated. In addition, these bikes require maintenance; they go wrong, and people generally do not have the skills to fix them.

I suppose the bigger question is why the vast majority of bikes ridden in Britain are so impractical. I can think – off the top of my head – of three possible reasons, although there may be others.

The first is that cycling in Britain is still very much a sporting activity. People ride bikes to get fit, or to exercise, or for leisure. Our cyclesport culture is actually pretty healthy – by stark contrast to our transport cycling culture – and that is undoubtedly reflected in the bikes people buy. Fast bikes are also a help when it comes to just making simple trips about town. British bicycle users are still perversely expected to behave like motor vehicles, so any bicycle that can make you travel more like a motor vehicle will obviously be relatively more attractive.

The second reason accounts for why the mountain bike is still the most popular bike in Britain. Namely – if you want to ride away from motor vehicles – as the vast majority of people do – then you pretty much have to have a mountain bike. Trails and bridleways are not at all easy to ride on any other kind of bike. Likewise bumping up and down off pavements (using pavements when you just don’t fancy the road is very common indeed) is much easier on a bicycle with chunky tyres and suspension.

The third reason potentially lies with the bike industry itself. Now of course bicycle companies and shops have to make money, and to sell the bicycles that people want. There probably isn’t the demand right now for Dutch bikes to be sold in huge numbers, because they’re not that much fun to ride on fast busy roads, and they’re not the best for off-road routes. That said, I am struck by how – if I went into a Dutch bicycle shop – I would just buy a bike, and that would pretty much be it. The only other ‘accessory’ I might need would be a chain lock, to accompany my integral lock. I wouldn’t need anything else.

By contrast, if  a typical consumer goes to a large bicycle shop, from scratch, wanting a ‘commuting’ bike off the shelf, they would need a large amount of extra ‘stuff’. Two locks. Lights. Clips to keep  their clothing away from the chain. A rucksack. Waterproof clothing (or some clip-on mudguards). They’d probably end up with a good amount of ‘cycle specific’ clothing too, because commuting is fast, and requires exertion. They might get a helmet, or a hi-viz vest. Their bike will also require maintenance, and tools to look after it, if the owner is so inclined.

These are all the ‘optional extras’ that the bike industry can – and does – sell. I don’t really blame them for doing so; we’ve ended up in this position because cycling has been shaped by the environment people have to cycle in. Nevertheless there undoubtedly exists an incentive for the industry to carry on as before, selling large amounts of cycle-specific ‘stuff’ to accompany bikes that require maintenance and add-ons. But it is precisely all this extra faff – maintenance, clothing and bits – that represents a significant barrier to cycling for the general population.

130 Responses to Where are Britain’s practical bikes?