Priority of cycle tracks across side roads

In summarising the results of their recently-conducted survey into the opinions of both members and non-members into varying types of cycling infrastructure, the CTC had this to say on the particular matter of cycle tracks –

Respondents were offered a set of conditions that CTC suggested be met before implementation of cycle tracks. These include cyclists having priority over turning traffic, adequate width and a high standard of maintenance. Support for these conditions was very high, with 88-95% of respondents saying that these were very or quite important.

Later in that report of the survey, the CTC go on to say –

Traffic regulations in the UK only permit cyclists to have priority over vehicles entering or leaving side turning[s] in very restricted circumstances. In nearly all cases cyclists must give way and are sometimes blocked from crossing with barriers, as in Figure 3, an image from Oxford. By contrast, rules in the Netherlands (Figure 4) permit priority for cyclists over side roads, without the need for anything other than road markings and some signs.

This is the vexed question of priority for cycle tracks across side roads, which is a particular bugbear for the CTC. Roger Geffen, their campaigns director, had this to say in the Guardian last year, in response to the findings of the Understanding Walking and Cycling report –

[An] important pre-requisite for segregation to work is legal priority for cyclists at junctions, given that this is where around 70% of cyclists’ injuries occur. In countries like Denmark and the Netherlands, if you’re on a cycle track and travelling straight ahead at a junction, the law says you have clear priority over drivers turning across your path

Obviously that’s the way things should work, but the CTC are concerned that we just can’t do that in this country.

This is the picture of a cycle track in Oxford that the CTC refer to in their report on infrastructure, used to illustrate the ‘lack of priority’ in the UK –

This is plainly awful design.

The cycle track runs along Park Street in Oxford, and the side road is a minor entrance into the University Science department. There should be no barriers, and the track should have priority across the side road.

There is, of course, no UK legal requirement for barriers like this at junctions. This is just sloppy, lazy engineering. The CTC suggest that barriers ‘sometimes’ block crossings, but they should also have made plain that such a tactic has no basis in regulation, and that they should be removed. Indeed the most idiotic section of barrier has disappeared since the CTC’s picture was taken. There was no legal requirement for it to be there in the first place.

Barely a hundred yards from this complete mess of a junction, the cycle track crosses another side road, in slightly smoother fashion.

No barriers, and no ‘give way’ markings. Cyclists would seem to have priority – albeit unclear, and potentially dangerous.

The CTC claim that a lack of priority is basically what we have to expect from cycle tracks under UK law, regulations of which mean that cyclists ‘have priority over vehicles entering or leaving side turning in very restricted circumstances.’

Is this true? A respondent to their survey – quoted in their report – doesn’t seem to think so.

It would be good to have new rules to support right of way at side roads as a default, but I don’t see them as essential since as far as I can see, high quality Dutch style segregated tracks could be built with currently available give way and priority markings.

This stands in disagreement with the CTC’s claim about priority for cycle tracks only being available under ‘very restricted circumstances’. What’s the reality?

The relevant document is the latest edition of The Trafﬁc Signs Regulations and General Directions, 2002, available as a huge 300MB pdf (hereafter TSRGD) – this 450 page beast sets out how signs and markings can and should be set out on British roads; it’s the bible of what is permitted.

The portion on ‘Give Way’ markings is found in Section 4, ‘Road Markings’, under Regulation 25. That regulation is online here. The subsection of this regulation we are concerned with is 25 (6), which states that

Where the transverse lines are placed in advance of a length of the carriageway of the road where a cycle track crosses the road along a route parallel to the transverse lines, then the requirement shall be that no vehicle shall proceed past such one of those lines as is nearer the cycle track, in a manner or at a time likely to endanger any cyclist proceeding along the cycle track or to cause such a cyclist to change speed or course in order to avoid an accident.

This is a lengthy way of saying that give way lines on a side road, placed before a cycle track crossing that side road, apply in the usual fashion – don’t cross that line if in doing so you make the cyclist change speed or course.  This subsection 25 (6) s a new addition to the TSRGD; it is not present in the Regulation 25 of the 1994 TSRGD, a document which seemingly has nothing to say about cycle track priority, or cycle tracks at all.

So cycle tracks can have priority over side roads, it seems.

It’s not quite that simple though; we also have to refer to the ‘General Directions’ section of the document, about how precisely to apply the signs. Regulation 34 (2) is found in the section covering ‘Signs to be placed only at specified sites or for specified purposes’, and states that

This is, again, a lengthy way of saying that a cycle track having priority across a side road using give way markings must consist of a road hump; i.e. the cycle track must run along that hump. (‘Diagram 1003’ is simply the familiar double-dashed ‘Give Way’ line painted on a road). That hump must be constructed according to condition (a) if you’re in England, namely

So in plain English, we can have cycle tracks, with priority, across side road junctions, marked with give way markings, provided they run across a hump.

What else is needed? A useful document is the Traffic Signs Manual, which explains, as simply as possible, how highway engineers should implement the conditions found in the TSRGD. Chapter 5 (pdf) deals with Road Markings, and has this to say about the implementation of the above.

3.25  Regulation 25(6) [from TSRGD] enables the marking to diagram 1003 to be used to give priority to a cycle track crossing a road. The length of road crossed by the cycle track must consist of a road hump, which should be of the flat-topped type. The hump must extend across the full width of the carriageway, in accordance with direction 34(2). The marking to diagram 1023 should also be provided, together with a longitudinal warning line to diagram 1004 on each approach. The hump must be marked with diagram 1062 (see para 21.9). The Give Way marking should be placed on the carriageway of the road, not on any part of the hump.

Again, 1003 is the double-dashed line. The hump must be flat, and extend across the road (obviously enough). 1023 is the familiar triangular ‘Give Way’ marking. A ‘longitudinal warning line to diagram 1004’ is simply a dashed central dividing line of the kind usually found between carriageways. Finally, diagram 1062 are the solid warning triangles painted on the upslope of the hump itself.

The picture below (courtesy of Google Streetview) seems to me to be a textbook example of how this has been done, literally by the book. It’s the start of the Bath end of the Bath-Bristol Railway Path.

We have the give way markings either side of the track (1003), together with the triangles (1023). The continuous flat, hump across the road. The (more than slightly faded) solid triangles on the hump (1062). And finally the ‘longitudinal warning lines’ (a dashed central divider to you and me) either side of the crossing (1004).

I have been informed by Paul James, while discussing this issue of cycle track priority, that Transport for London are of the opinion that DfT regulations mean a second set of give way markings cannot be placed within 5m of a junction.

I certainly have not been able to find such a clause within the discussion of cycle track priority. The best I can do is a section contained within LTN 2/08, Cycle Infrastructure Design (pdf), which has this to say

On a bent­out crossing, the cycle track approaches are deflected away from the main carriageway to create a gap of one or two car­ lengths between the main road and the crossing. A gap of about 5 metres is required to accommodate one car. The arrangement allows drivers turning into the side road extra time to notice the crossing and provides somewhere for them to stop for crossing cyclists without obstructing traffic on the main road. It also allows a vehicle waiting to exit the side road to do so without blocking the crossing point. [my emphasis]

Note, however, that this is only a statement of the length required to accommodate a car, not a formal stipulation. In addition, it only applies to the design of ‘bent out’ crossings, not crossings in general – indeed the previous section, 10.3.6, says

Where the crossing is placed on a road hump, it may be better if  it is “bent out”

‘May be better’. Crossings don’t need to be bent out. And even if they are, the distance mentioned is only suggestive, not a stipulation. I think TfL might be getting the wrong end of the stick, if this is the source of their ‘5 metre’ claim.

There are crossings in the UK which quite obviously do not meet this requirement. 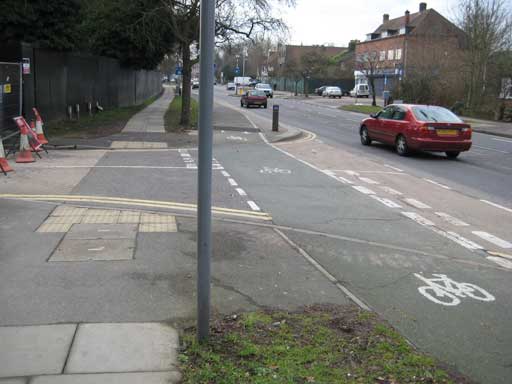 But in any case a UK cycle track need not be ‘bent out’. It can run in a straight line, remaining parallel to the road, like this example, again from Assen –

If there is not much queuing traffic coming out of the side road, this is a sensible design, provided that the geometry of the junction is sufficiently tight to force slow entry speeds.

Again we have UK examples of this type of design – 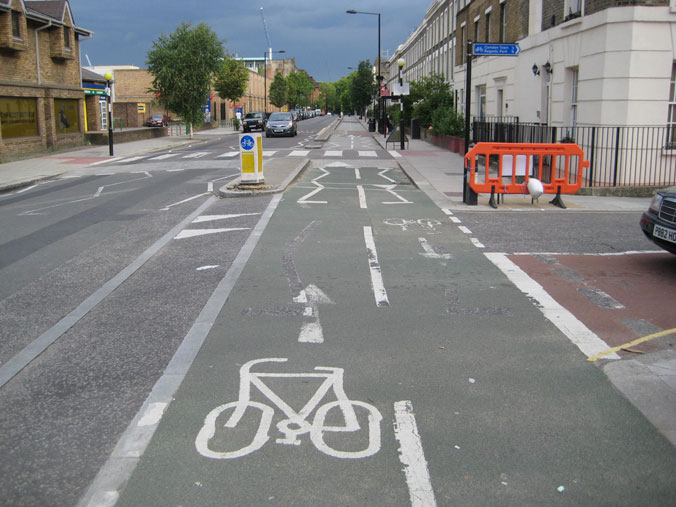 The design is obviously inferior, particularly in the width of the track – but we can do this in this country. David Arditti has documented plenty of examples, mostly of this form. This track does not meet the strict requirements of TSRGD, because it does not have give way markings on entry (only the triangle markings on the hump), but I see no reason why  this could not have been done properly.

I think this is slightly underdone – the painting of triangle markings on the hump at the right hand side could be a useful addition here, along with a continuous line along the hump, to give an extra implication of priority.

So the big question is – given both the provision in law for cycle track priority, and the evidence of plenty of cycle tracks with priority in the UK that accord with law to varying degrees of strictness – does this statement from the CTC

I am grateful to David Arditti for pointing out in the comments where TfL’s aforementioned 5 metre ‘requirement’ originates – the Appendix of Transport for London’s London Cycling Design Standards. In Appendix C we find these two diagrams – 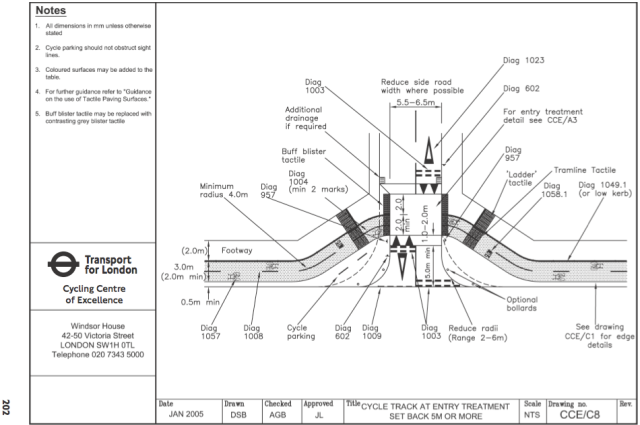 The first shows a cycle track without priority, continuing (more or less) without set back; the latter does have priority, being set back ‘5m or more’.

It is worth noting, as David points out, that these are only suggestions, not legal requirements. I have no idea where John Lee’s belief that the law is against cycle tracks having priority unless they are set back 5 metres originates.

51 Responses to Priority of cycle tracks across side roads