Posted on February 21, 2014 by aseasyasriding

The epithet ‘kerb nerds’ seems to have been coined to describe those people who think that, on roads that carry a certain volume of motor traffic, travelling at a certain speed, cycling as a mode of transport should not share the same physical space as that motor traffic.

This label tends to ignore the fact that the Dutch model of cycle provision – which ‘kerb nerds’ like me tend to highlight as best practice – actually involves a surprisingly small amount of this kind of lateral separation. The Dutch employ other methods – usually falling under the umbrella of ‘unbundling’ – to separate cycling from motor traffic. Motor traffic is removed from the vast majority of streets in urban areas, concentrated on a larger grid of distributor roads, or displaced onto through roads. (Bypasses genuinely are bypasses in the Netherlands). 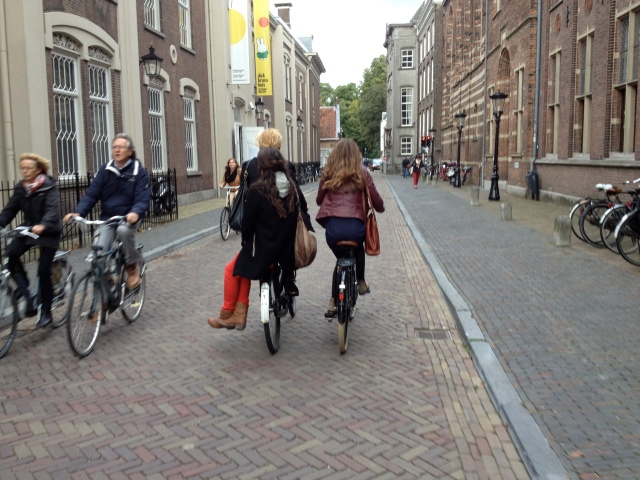 Separation, through removal of motor traffic. ‘Kerb nerds’ want this too!

‘Kerb nerds’ don’t believe in cycle tracks everywhere. They’re just another tool in the toolbox – one which, for some reason, a certain group of cycle campaigners insist on ruling out anywhere.

Beyond this basic misunderstanding, the label ‘kerb nerds’ also serves to overstate the important of kerbs in creating physical separation on the routes that actually require it. I suspect the problem here is that the people most vigorously opposed to ‘kerbs’ are only aware of the kind of physical segregation they see on a day-to-day basis, in the places where they live in Britain. (This is the most charitable explanation – wilful ignorance of Dutch practice is another).

This is the kind of physical separation they might be imagining – a hard step down into the carriageway, then a hard step back up over another set of kerbs. 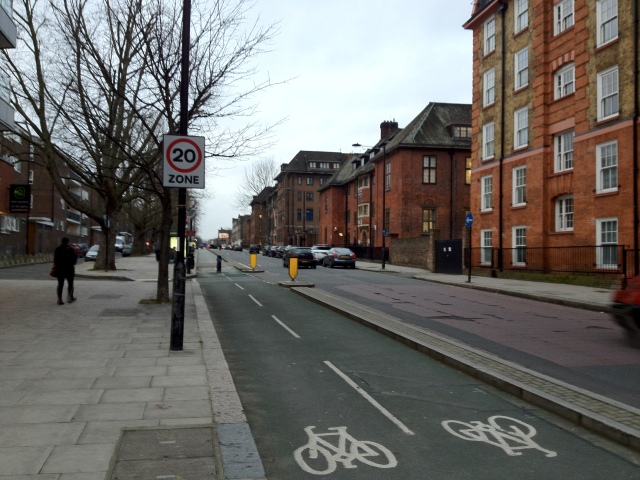 The problem with kerbs
At the heart of the cyclecentric, separated space campaign is a desire to see additional kerbs installed to “protect cyclists from motor vehicles” or for cyclists to be diverted onto the pavement in tracks, for example around the back of bus stops…  This is said to benefit cyclists, but ignores the problems that will be caused to pedestrians, particularly older people and the visually and mobility impaired. Pedestrians (whom hitherto transport planners have put at the top of the transport hierarchy) want to see wide, level, continuous and clear pavements and to be able to cross the street at will. Pedestrians do not want additional kerbs and complexity introduced into the street. Pedestrians do not want to have to look out for cyclists on the pavement, nor do they want to have to cross a cycle track and perch on a foot wide kerb before crossing the carriageway.

The introduction of kerbs and the paraphernalia of separated tracks flies in the face of years of work to establish that our streets are not there simply to cater for movement, but are also places for public life. Just at the time that walking policy has made a shift towards reduced segregation – for example by  the removal of guard railing etc. – and more shared space some cycle bloggers and campaigners want to shift cycling provision towards more separation.

His post has this picture of a ‘cycle track’ in it, apparently to demonstrate what ‘kerb nerbs’ want to install on every street in London.

This is the contraflow cycle track on Pitfield Street, Hackney, which Cllr Stops writes

serves a cycling function, but by no stretch of the imagination can this be described as an attractive and walkable street. For able bodied pedestrians it’s horrible to cross, for older people and disabled pedestrians it is un-passable. It is poor urban design.

Here’s the thing – kerb nerds would agree with this description.

There shouldn’t be any need for this kind of treatment on Pitfield Street – it could have motor traffic removed on it, through filtered permeability, or through opposing one-way systems. The parallel main roads, the A10 and the A1200 should be taking the through traffic.

How many miles of trip hazards is Boris going to install. I’m sure Hackney will continue to focus on what’s important for cycling and peds.

Good cycle tracks – the kinds ‘kerb nerds’ want to see – are not something anyone will trip over.

No trip hazards here either.

Now of course it is undeniable that cycle tracks represent something ‘extra’ to cross, if you want to walk from one side of the road to the other. But this isn’t necessarily worse. How much harder is it to cross a busy road, with cycles in the traffic stream, than it is to cross the road in stages, with cycles subtracted from that general traffic stream? (Indeed, how many people on that route are cycling, instead of driving, because the environment is attractive to do so?)

And, rather than presenting barriers to Dutch people with mobility problems, cycle tracks are liberating – they are an excellent way to get about.

Do cycle tracks need to be a problem for the mobility impaired?

If cycle tracks are designed well, then the distinction between ‘pedestrians’ and ‘cyclists’ disappears. Cycle tracks are simply another way for people – everyone – to get about, not just ‘cyclists’.

Only if you have a fixed conception of what a ‘cyclist’ could possibly be would you describe cycle tracks as ‘cyclecentric’. They aren’t barriers; quite the opposite.

The Cycling Embassy of Great Britain has more detail on what good cycle tracks should look like.

This entry was posted in Cycling Embassy Of Great Britain, Cycling policy, Infrastructure, Subjective safety, The Netherlands. Bookmark the permalink.

25 Responses to A kerb nerd protests