Do you hate humans? Take it out on them through design

Last week I was staying in Leeds for the Cycle City Expo, and the Space for Cycling campaigners conference. My hotel was quite convenient – only half a mile from Leeds Town Hall where the Expo was being held, and about the same distance from venue for the Space for Cycling Conference. (Indeed, it is formally described as the Leeds City Centre Premier Inn.)

Despite this proximity to the centre, the layout of the hotel, and the surrounding roads, is quite extraordinary if you are trying to get to it on foot.

The hotel entrance doesn’t face onto the street; you can only access it from the car park at the rear. 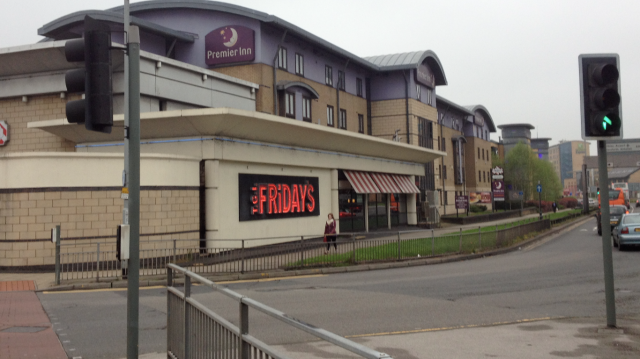 A hotel next to a road. But no entrance.

This meant that I cycled straight past it while I was trying to find it.

If you are attempting to walk to this hotel from the north, the direct route – of just a hundred metres or so – becomes an extraordinary meander, thanks to a combination of bizarre building design and enormous roads with limited crossing points, that force you take a hugely indirect path.

But this isn’t even the worst example of this kind of ‘design’ I’ve encountered. An even more preposterous example can be found in Crawley in West Sussex, right in the centre of the town.

Central Sussex College is adjacent to the main shopping centre of the town, separated from it only by College Road. You can see it, only a matter of tens of metres away, when you step out of the County Mall shopping centre.

But just try to walk there.

Six (yes SIX) separate crossings, followed by an infuriating diversion all the way around the building to enter it from the car park.

What is amazing is that this is (amongst other things) a college for 16-18 year olds – so a considerable proportion of the people attending it can’t even drive. Yet the obvious and easy way to access the building – on foot – has been simply been ignored, and made about as difficult and circuitous as possible.

Let’s take a closer look. The corner of the building that faces the town centre – where the entrance should be – isn’t even being used. It’s somewhere to stack chairs and tables.

Could this be the actual entrance?

There should be an entrance here, facing the town, but evidently that was just too obvious. Some opaque windows combined with dead space are plainly much more important.

Here’s another view of where that entrance should be, through a sea of pedestrian guardrailing.

Incredibly – once you manage to cross the road – you will find that the building is further protected against attack by pedestrians, with armco barriers. ARMCO BARRIERS. Presumably in case a ‘car loses control’. 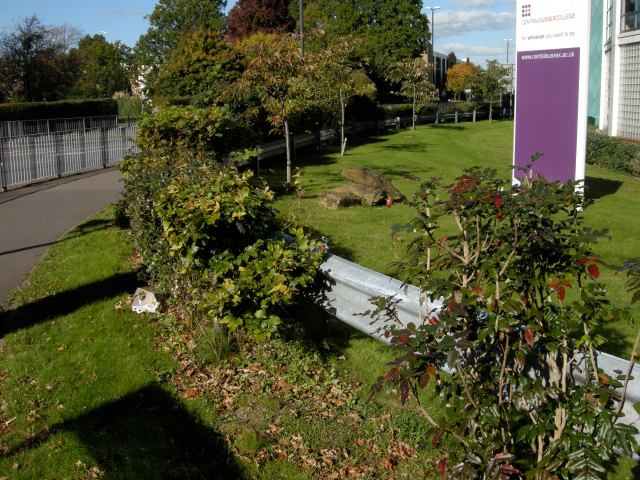 This ring of crash protection extends right around the building, right around to the car park entrance to the north east (top right in the aerial view). Note where it lies in relation to the pavement – pedestrians are expendable.

They even had a spare bit left over – it’s been put to good use, protecting another bit of the building from speeding vehicles. 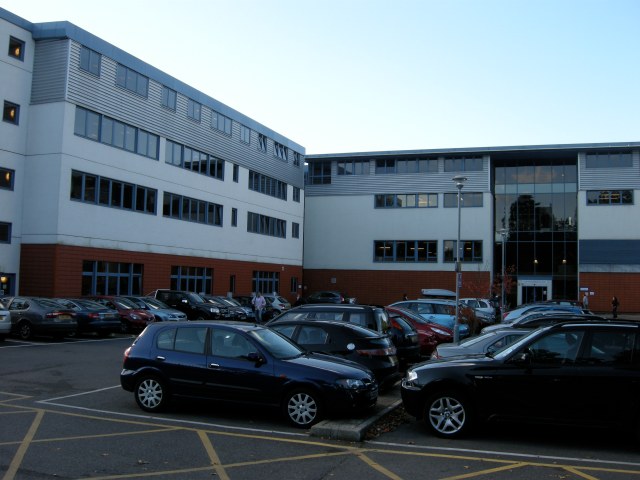 The rear. The entrance is in the corner.

Plain evidence of design failure, right in front of those responsible.

31 Responses to Do you hate humans? Take it out on them through design