The possible versus the acceptable

North Parade in Horsham is a fairly busy distributor road (running north – unsuprisingly) out of the town centre. It has a 30 mph limit, and very narrow cycle lanes, which give up at a couple of awful pinch points. 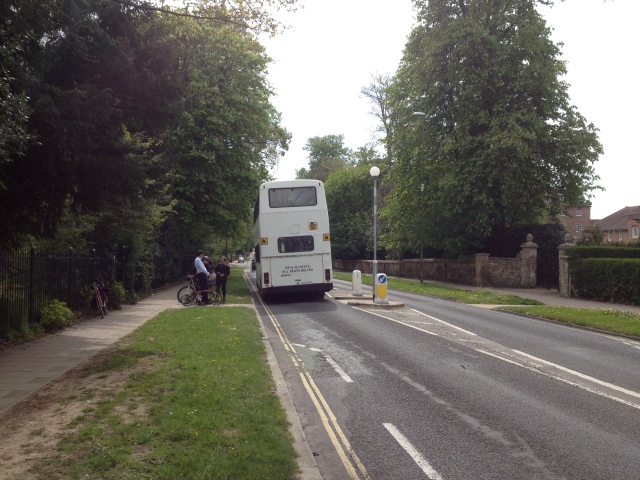 The local cycle forum are quite rightly pressing to have these sorted out – in fact the picture above shows us with a representative from West Sussex County Council. A good interim solution would be to have the pinch point removed, and replaced with a zebra (this is an important crossing for pedestrians, with access to the park on the left).

Long term, this road desperately needs cycle tracks. There is absolutely no shortage of space here, as you can see, but obviously their construction would involve investment – adjusting the kerb line and drainage, and so on.

The problem is that councils like pinch points. They make it relatively easy for pedestrians to cross roads, without them interfering with ‘traffic flow’ (i.e. motor traffic flow) in ways that zebra or toucan crossings would.

And it is on this kind of issue that Sustrans’ new guidance is really quite unhelpful, because it doesn’t challenge councils’ inclination to continue employing pinch points (or ‘central islands’) like this, at all.

The handbook simply says ‘avoid gaps of 3.1 – 3.9m’. Going by a standard bus width of 2.5m, the pinch point in Horsham probably falls outside this recommendation, and is therefore acceptable, by the terms Sustrans set out. Even if it didn’t, ‘avoid’ is hardly strong enough – likewise the suggestion that a cycle lane of 1.5m ‘should’ continue through the pinch point. [EDIT – I’ve now got around to measuring these pinch points, and they are exactly 3m wide.]

Councils will want to take the easy path, that of least resistance, and do as little as they can. They can paint a bicycle symbol in the middle of the pinch point, and by Sustrans’ terms, that’s acceptable – indeed, even recommended.

I think this is the issue that many people have with the Sustrans’ guidance. It’s not that it doesn’t contain good recommendations (there’s plenty of good stuff in there) – it’s just that it is far, far too weak in opposing the stuff that we all know councils will only be too happy to build, if it means they can get away with doing things on the cheap. This is a real problem if you are presenting your handbook as best practice.

This isn’t a matter of asking for the (currently) impossible, or for those aspects of Dutch or Danish design that would be difficult to implement in the UK, or that are alien to UK highway engineers. It’s about demanding quality where it would be easy and obvious to achieve it. I would like a Sustrans manual that says 3m wide pinch points on a road with a 30mph limit and about 10,000 vehicles a day are completely unacceptable, not one that says ‘consider’ painting a cycle symbol in the middle of the pinch point.

If councils come back and say we can’t build a cycle route to those standards? Nothing has been lost; the road will remain as crap as it was before. And no time and effort has been wasted in half-arsed efforts to present it as a ‘route’.

This entry was posted in Infrastructure, Pinch points, Sustrans, The Netherlands. Bookmark the permalink.

28 Responses to The possible versus the acceptable