Posted on July 3, 2014 by aseasyasriding

There’s a section early in the newly-released London Cycle Design Standards about ‘responding to context’ – the types of cycle infrastructure that should be expected on a variety of streets and roads, according to the movement or place (or both) function of that street or road.

From page 13 of the London Cycle Design Standards

That we have such a large variety of street and road types is largely a consequence of our historical failure to think coherently about clear functions and purposes for them. For instance, we have residential streets that, for the most part, still function as routes for motorised traffic. Our high streets, likewise, are all too often still corridors for motor traffic, rather than genuine places.

The Dutch – either by happy accident, or by careful thought, or a mixture of the two – do not have such a confused picture about the function of streets and roads. They are quite clear that, places should genuinely be places, and that this should be achieved by ensuring that the street, or square, in question serves an access-only function for motorised traffic.  Likewise if a street or road has to serve a movement function, then they won’t attempt to dress that street up as a place; the function will be quite clear, and all modes will have clear, defined paths along (and indeed across) this road.

So the historical centre of Utrecht is almost entirely a clearly-defined place, with very little motor traffic, except for residents coming and going from their properties, and deliveries. These streets do not have a movement function, at all, for motorised traffic, although they remain useful routes for pedestrians and cyclists.

The main roads in the city centre, however, are quite obviously movement-oriented. Although people can cross the road easily, on foot or on bike, there are clearly-defined paths for the movements of motor traffic, buses, pedestrians, and cyclists. 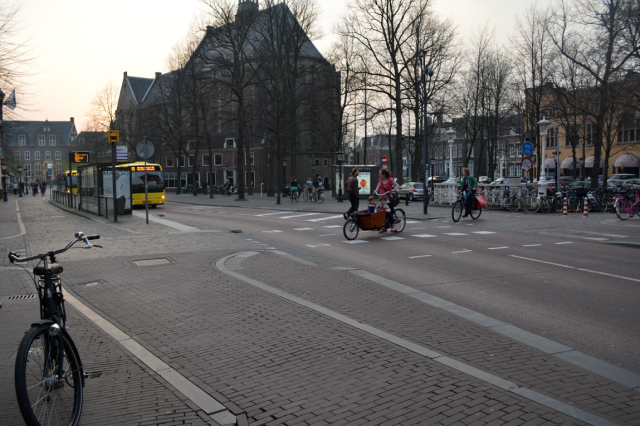 There’s a refreshing honesty about this approach. These roads and streets can’t ever really function as ‘places’ because they have (in these examples) large bendy buses travelling through quite frequently, so there is no attempt to pretend that they are places. They are designed accordingly for movement, but without compromising pedestrian or cycle comfort.

But in the UK we seem to developed a curious alternative strategy that, as in the title of this post, I’m going to dub ‘placefaking’. It involves dressing up streets that continue to have a serious movement function as a ‘place’, and attempting to persuade us that these roads and streets are now ‘places’, despite the fact that they continue to carry significant volumes of motor traffic. (In its most extreme form, the implication is that ‘places’ need to have motor traffic flowing through them!)

Exhibition Road in Kensington and Chelsea is perhaps the most painful example of this phenomenon. A certain amount of effort has been employed in an attempt to persuade the public that this road – heavy with motor traffic, particularly at peak times – is now civic space, where pedestrians can linger at leisure in the ‘carriageway’. That stylish diagonal lines would encourage pedestrians to cross on natural desire lines, as they pleased. 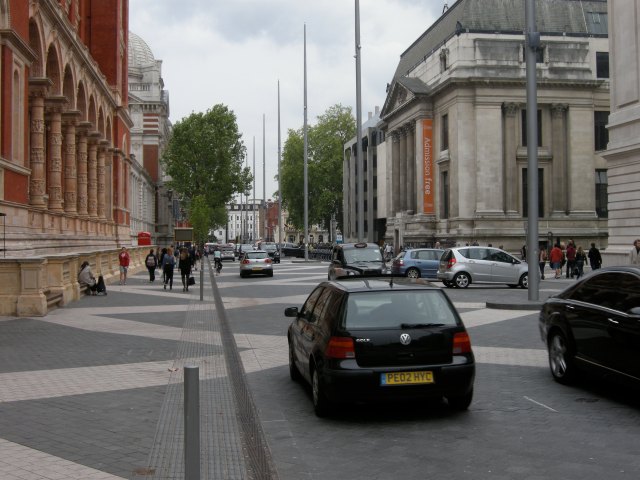 Don’t get me wrong; there is nothing intrinsically wrong with planting more trees, and softening kerb lines, and making the street more attractive. But it strikes me that many of these schemes are in denial about the function of the streets in question, and in consequence it’s like putting lipstick on a pig. If the roads we are dealing with will still be carrying a significant volume of motor traffic, then we should be honest about that, and design accordingly.

My particular concern here is that cycle-specific design tends to get squeezed out by placefaking. For instance, I am not aware of any new ‘placemaking’ scheme on a road in Britain that incorporates cycle tracks where they should reasonably be provided – for instance, on roads carrying more than 2-3000 PCUs per day. (Please point me in the direction of any examples that I may have missed!)

Presumably this is because they reinforce the impression of a ‘movement’ function, interrupting the ‘placeishness’ of the new design. But there’s a degree of sticking heads in the sand here; cycle tracks are required because of the volume of motor traffic, and if that volume is high enough to demand cycle tracks, then it is fanciful to imagine you are creating a place – there is still too much motor traffic thundering through.

The proposals for Tottenham Court Road appear to me to fall into this trap. The intention, again, is an attempt to create more of a ‘place’. Trees are being planted, the kerb lines are being softened, and so on. Cycle tracks are not included.

At the Camden Cyclists meeting on Monday to discuss this scheme, an officer from Camden Council explicitly referred to the ‘shared space’ on Tottenham Court Road, and also referenced ‘woonerf’ (home zone) as an inspiration.

But how much of a genuine ‘place’ is Tottenham Court Road going to be? Even when it is closed as a through route to motor traffic during the day, around 180 buses per hour at peak times will be travelling along it – on average, three a minute (Alex Ingram has crunched the numbers). More importantly, from 7pm to 8am, and all day on Sunday, this will be a conventional road, open to all traffic. A ‘place’?

I got the impression, from that meeting on Monday, that cycle tracks don’t really fit in with the Camden ‘vision’ for this road, an attempt to make it a place. Cycle tracks, which by any reasonable measure should be included because of the volume of bus traffic travelling down this road (to say nothing of the situation when it is open to all motor traffic), apparently won’t work… because of the numbers of buses travelling down this road, with passengers getting on and off them. There is a curious circularity here which implies that any road that carries a large number of buses can’t have cycle tracks on it, because floating bus stops can’t work with large numbers of bus passengers.

I’m going to finish here with this picture of Vredenburg in Utrecht, from a few weeks ago, tweeted by @CU2030. 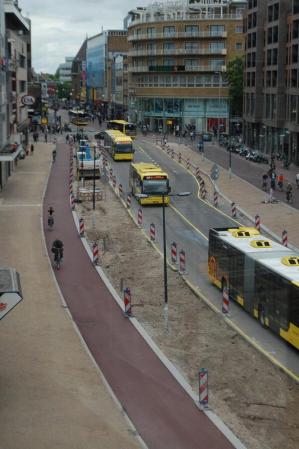 This is a street, nearing completion, in Utrecht, which is principally a bus-only corridor, with cycle tracks alongside it. As you can see, there are plenty of buses travelling through here – the road travels from the station, forming part of a corridor through the centre of the city, out to the university on the outskirts.

When I tweeted this picture, Tompion Platt wrote

@AsEasyAsRiding looks great for people passing through on bike or bus but as a ‘place’?

I shouldn’t really be singling him out, because this is quite a common attitude! Indeed, I suspect most people, confronted with this image, would agree that it isn’t a ‘place’ at all. It looks like a transport corridor.

And that’s exactly right. Vredenburg can’t be a place, because it has a large number of buses travelling through. Attempting to make it a place would just fail – it would be a waste of time. So it has been quite rightly designed around a movement function, with pedestrians and cyclists catered for alongside the bus lanes. It is, as a I mentioned earlier, a refreshingly honest approach. If you can’t get rid of the buses, then you have to accept reality, and design accordingly.

Let’s not keep falling between two stools. We need to make our places actual places, and the streets and roads that fulfil movement functions genuinely accommodating for all potential users who wish to travel along them.

This entry was posted in Infrastructure, placemaking, Shared Space, The Netherlands, Town planning. Bookmark the permalink.