I’ve just spotted that Transport for London’s new Draft Cycle Safety Action Plan attempts to pull the same trick that Norman Baker and Mike Penning tried to pull back in 2012.

That is, it makes a comparison between cycle safety in London and Amsterdam (along with other cities) on the basis of deaths per head of population, rather than deaths per total distance travelled by bike (or by total time spent travelling by bike).

Here’s the graph in question, from page 10 of the Plan –

Followed by the helpful explanation –

So, looking at this graph, you might think that London (in yellow) is fantastically safe! Just look how much lower the number of fatalities there are, compared to Amsterdam, per capita. London had just 1.7 cycling fatalities in 2012 per million population, where Amsterdam had 6.5 – nearly four times higher.

But of course this is an entirely misleading comparison. It doesn’t take into account the fact that, across London, cycling only accounts for around 2% of all trips made, whereas in Amsterdam cycling accounts for nearly 40% of all trips made. There is much, much more cycling in Amsterdam per capita, so comparing cycling fatalities purely on a per capita basis is absurd. It’s like concluding it’s much safer to cycle in London than in Amsterdam if you have a Dutch name, because many more people with Dutch names are killed cycling in Amsterdam than in London.

This is the same logic that led Mike Penning to argue

I think the Netherlands may want to come and see us, to see how we are making sure that so few people are killed cycling

How much of this is down to stupidity or dishonesty is hard to tell. You would certainly think Transport for London and a Transport Under-Secretary (as Penning was, at the time) should know better.

The other thing that’s worth mentioning here – beyond the failure to use an appropriate rate – is that, in Amsterdam, children and the elderly (both more vulnerable groups, for different reasons) ride bikes in large numbers.

24% of all trips made by Dutch over-65s are cycled, while in London 95% of over-65s never cycle. If people that are, in general, more frail – and more likely to suffer death than a younger person in an equivalent incident – aren’t cycling at all, that will have a further skewing effect on casualty figures. 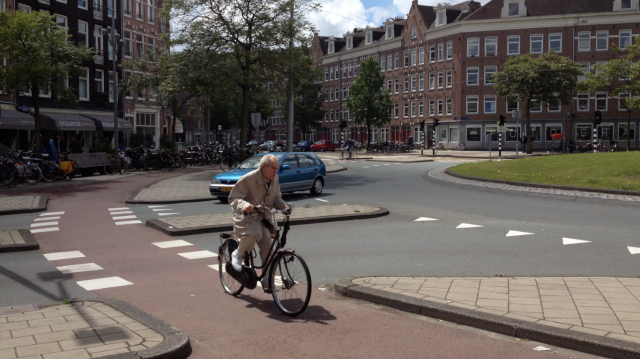 Thanks to the Road Danger Reduction Forum, who spotted this ‘measurement’ issue.

This entry was posted in Safety, The Netherlands, Transport for London. Bookmark the permalink.

27 Responses to The going rate