Posted on November 4, 2014 by aseasyasriding

I really, really wish I didn’t have to write another ‘helmet’ post ever again, but the Headway brain injury association have made me. Thanks very much.

Here’s what they’ve done. They’ve responded to Chris Boardman’s appearance on BBC Breakfast with a sanctimonious, error-strewn press release, that only serves to highlight their total inconsistency on the issue of head protection.

This is their release. I won’t link to it; you can find it easily by Googling, if you so wish.

Headway has expressed its anger and disappointment over a BBC Breakfast feature on cycling in which Chris Boardman was seen cycling through Manchester city centre wearing dark clothing and without wearing a helmet.

Mr Boardman, a former Olympic cyclist and currently a policy advisor for British Cycling, was cycling with BBC reporter Louise Minchin, who was appropriately dressed and was wearing a helmet in compliance with the Highway Code and BBC editorial policy.

Mr Boardman attempted to justify his reasoning in a subsequent piece to camera which was later posted on the BBC Breakfast Facebook page.

In this one-sided interview, Mr Boardman states that ‘it (wearing a helmet) discourages people from riding a bike’ and that while ‘there is absolutely nothing wrong with helmets, they are not in the top ten things you can do to keep safe’.

In July 1998 Mr Boardman featured in a full-page article in The Sun in an article entitled I was saved by my helmet. Following a crash at 30mph that left Mr Boardman unconscious, the cyclist said: “If I was left unconscious with a helmet, then I don’t like to think what would have happened if I had not been wearing one.”

He continued: “I will continue to wear one. It was a real lesson for me. Things could have been so much worse. At the moment you are not forced to wear a helmet but I choose to.”

Peter McCabe, Chief Executive of Headway, has labelled Mr Boardman’s appearance on BBC Breakfast and his recent comments as ‘dangerous and lacking in common sense’.

“It is worrying that a leading figure in the world of cycling should be allowed to put across such a dangerous and irresponsible view of helmets in this manner,” said Peter.

“The UK’s leading independent transport research institution, the Transport Research Laboratory, has recently demonstrated that cycle helmets are effective in reducing the risk of head and brain injury. The TRL has also dismissed the myth that helmets put people off from cycling, stating in a report to the States Assembly in Jersey that there is no evidence to suggest this is accurate. In fact, cycling in Australian states where helmets are compulsory has never been more popular.

“Questions have to be asked about why a representative of British Cycling, which receives public funding, is actively encouraging cyclists to disregard the Highway Code, putting their lives at risk in the process. Mr Boardman is on record saying he is lucky he was wearing a helmet when he had an accident, which can happen to any cyclist at any time. His recent actions and comments are dangerous and irresponsible.

“The reality is that had Mr Boardman not been wearing a helmet when he had his accident he might not have been able to cycle around Manchester this morning. He needs to explain why he said one thing then and the complete opposite now, and why he promotes a brand of helmets in his own name if he feels they are not effective.

“It is vital that cyclists are given education and encouragement to ensure they comply with the Highway Code and increase their safety by wearing helmets.”

This is the video of Boardman cycling around Manchester that has provoked this outrage; accompanied by Minchin, who as a BBC employee, complying with BBC editorial policy, is of course wearing an eye-meltingly bright yellow top (‘appropriately dressed’, according to Headway), and a helmet. The subsequent piece to camera, in which Boardman explains why he chooses not to wear a helmet for ordinary, everyday cycling, is here.

Note also that the Headway press release talks about ‘complying’ with the Highway Code, by wearing a helmet (and apparently ‘disregarding’ it, by not wearing one).

Which is a recommendation. Entering vehicles through other doors is not a ‘failure to comply’ with the Highway Code. Clearly, talk of ‘compliance’ with regard to helmet-wearing is gibberish.

The central ‘argument’ in the Headway press release is just as bizarre. It appears to be that Boardman once crashed his bike while wearing a helmet, acknowledging, at the time, that his helmet might have reduced the injuries he suffered, and that this somehow makes him a hypocrite.

But as the press release itself mentions, that crash occurred at 30mph+, in a sporting event, with considerably higher levels of risk. A video of that crash is below, at around the nine minute mark. (And there’s an interesting footnote to this story. Not far from where Boardman was injured, a child watching the race was hit, suffering – yes, you guessed it – serious head injuries, far more serious than the ones Boardman suffered.)

Riding at these speeds, competing with other riders in close proximity, bears absolutely no relation with the kind of cycling Boardman was doing in the BBC video – slow cycling, in ordinary clothes, around a city.

Indeed, it bears as much relation to cycling in the Tour de France as driving to a supermarket does to rallying; yet I’m sure Headway don’t berate rally drivers for setting ‘a poor example’ by driving to the shops without their safety equipment. 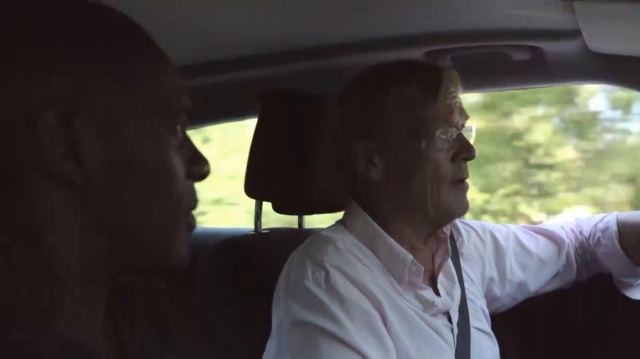 Either Headway can’t tell the difference between these wholly contrasting kinds of cycling, with their entirely different levels of risk, or they do know the difference, and have chosen to belligerently ignore it to ram home their dogmatic point. What’s worse?

But when it comes to head injuries suffered by people employing different modes of transport, this ‘broad brush’ approach from Headway – the approach that apparently can’t tell the difference between the Tour de France, and cycling around town – suddenly vanishes. Headway become deeply selective about which kinds of activity require protective headgear.

Here’s Ben Quick, who was hit by a car while walking, and suffered severe head injuries. No comment on whether he should or shouldn’t have been wearing protective head equipment.

By contrast, Gareth Green, who hit his head on the ground while cycling, having swerved to avoid a bus, thinks that “the Government should make wearing cycle helmets the law. If all cyclists wore helmets, fewer lives would be lost or forever changed by brain injury.”

No comment on whether this logic applies to the pedestrians and drivers featured on Headway’s website; drivers like Luke Flavell, who crashed his car into a lamppost, suffering serious head injuries. His lack of protective headgear again passes unmentioned. Or Michael Darracott, who severely injured his head when he flew through his car windscreen. It’s almost as if Headway don’t care if drivers injure their heads – why aren’t they advocating full-face crash helmets for car occupants?

Like Ben Quick, Nicola Scott was knocked down by a car while walking, suffering serious head injuries. Should she have been wearing a helmet? Or Paul Calderbank, who was hit by a taxi while walking? Headway don’t say.

By contrast, Kirsty Offord, who happened to be on a bike when she was struck by a car, is ‘determined to promote the use of cycle helmets’. Likewise, Carolyn Molloy, who suffered a brain injury when she crashed her bike, ‘strongly believes that cycle helmets should be made compulsory.’ And unsurprisingly, Sinead King, who fell off her bike in her back garden at the age of six, also manages to preach about helmets.

This is Headway’s Brick Wall.

Risk, taken across the population, does not stop when you get off a bicycle. The figures make that quite clear. In fact they make it clear that it may not even subside.

And this is The Brick Wall against which one has to beat one’s head when trying to discuss helmets: the fact that the evangelists believe cycling to warrant a helmet when real figures show that there’s no demonstrable risk above other activities for which even the evangelists argue that a helmet is not necessary.

Why is that Headway seemingly don’t care about serious head injures suffered by people walking and driving, even though the rates at which these serious head injuries are suffered are comparable to the rate at which people cycling suffer serious head injuries?This selectiveness is all the more remarkable in the light of their failure to distinguish between 1998 Chris Boardman, and 2014 Chris Boardman. It’s a selectiveness that comes and goes. There’s apparently no difference between riding in a peloton during a 30mph competitive sprint, and trundling around a city; yet there is, somehow, some critical difference between striking your head having slipped over while walking in your back garden, and doing the same thing while cycling, enough to justify preaching about helmets in the latter case, but not in the former.

Headway really need to take their single issue campaign away, have a think about what it is they’re trying to achieve, and attempt to reach a measure of consistency. At the moment, they are embarrassing themselves.

This entry was posted in Helmets, Uncategorized. Bookmark the permalink.