This week, it’s evidently the turn of ‘the joggists’ to be the folk devil in the media, helpfully standing in for ‘the cyclists’ who traditionally take on this popular and coveted role.

One isolated incident, in which a man committed what appears to be an unnecessary and unprovoked assault, has proven fertile territory for journalists and opinion columnists to veer off into stereotypes and ludicrous commentary, in much the same way they do following an incident involving someone on a bike. (It’s perhaps no surprise that it’s some familiar faces making precisely same kinds of arguments).

There was rich competition for the most absurd take, but a strong contender surely has to be Sky’s Adam Boulton, who weighed in with this gem –

With an inevitable dig at cyclists

Closely followed by Julie Bindel, who, on Radio 4’s Today Programme, implied that jogging on pavements in cities should be banned entirely, again with an inevitable dig at cyclists –

Bindel: Running tracks are great. I like watching runners on tracks, it makes me feel envious about how fit they are.

Webb: What, ban jogging on the pavements?

Bindel: Jogging on the pavements… It’s very different in the city, I think, to runners I’ve seen in the countryside, and of course not all runners are aggressive. But when people are out walking and somebody’s coming at you, at a speed, and showing their clear irritation that you’re in their way, it’s not right. It’s exactly like pedestrians on the pavement when cyclists decide that they’re going to take their bicycle off the road, where they should be. So I think that runners should have their designated spots, and we should give priority to that, and that we shouldn’t be pushed out of the way under any circumstances.

And finally Michelle Hanson, with an extended whinge about joggers in general –

Most joggers do seem mad keen to jog in a straight line and not stop for anyone or anything… most joggers tend to look rather miserable and tormented, as if beset by personal problems, which perhaps stops them from giving a toss about the other people passing by.

Oh, with an inevitable dig at cyclists too, before rambling on about how apparently ill-mannered we are on pavements nowadays, getting in each other’s way.

Not one of these opinions actually engages specifically with the incident in question. They’ve just used that incident as an opportunity to veer off into a moan about joggers in general, crowbarring in cycling at the same time for good measure.

And worse than that, they all deal in the easy currency of blaming individuals for conflict on our streets, rather than examining why people are coming into conflict in the first place, and how we might stop that conflict from occurring at all. (This is a familiar theme, as you might expect…)

A clue is provided in one of the Radio 4 ‘vox pops’ in the piece preceding the interview with Bindel, as a man describes how a jogger annoyed him –

The easy option is of course to blame the jogger. But hang on a second. The pavement is being dug up. There’s also a lorry parked on it. Human beings only left with a narrow strip. Would these two people have even collided in the first place if we didn’t treat pedestrians with such contempt? 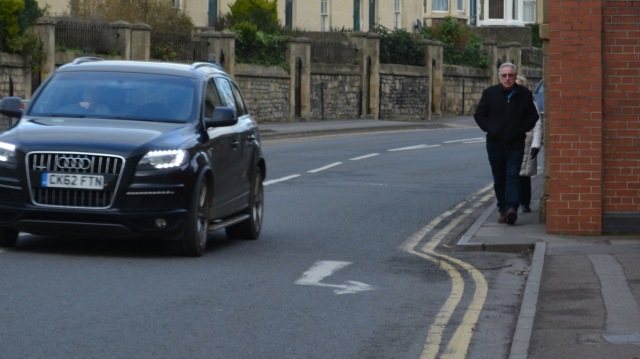 Bloody joggists running directly towards me, no manners. It’s obviously their attitude that’s the problem, not minuscule pavements.

Might it be the case that joggers are annoying not because of who they are – some inevitable ‘joggist’ tendency – but because pavements are desperately narrow?

And by the same token, might it equally be the case that cyclists are annoying not because of who they are – insert some guff here about ‘lycra louts’, or ‘smug, or ‘self-righteous’ – but because cycling is legalised on these pavements by councils unwilling to reallocate road space, and happy for cycling and walking to come into conflict as a result?

Or because hostile roads leave ordinary people withnowhere else to go? 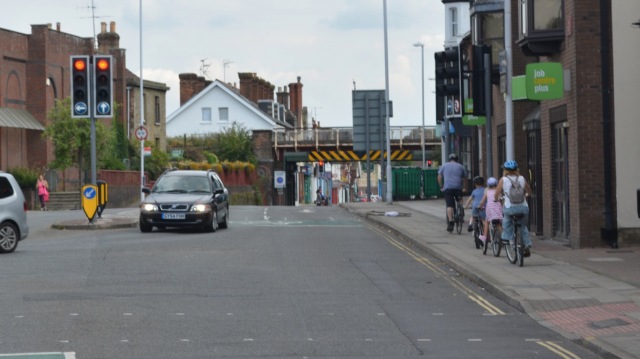 In reality, all this bickering about cyclists and joggers being annoying and ill-mannered is spectacular point-missing. It’s utterly ludicrous to say that cycling and jogging ‘doesn’t fit’ in our cities and towns. You could only arrive at that conclusion if you think tiny pavements and roads without any cycling infrastructure are somehow god-given and immutable, rather than the product of decades of car-centric planning. Jogging and cycling can obviously fit in cities, and the only reason they come into conflict with walking is because of a failure to give appropriate space to these modes of transport. 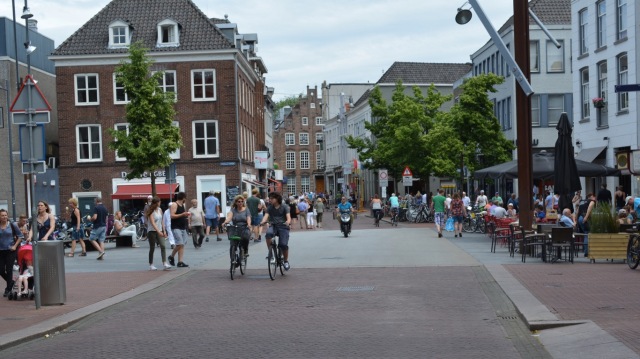 How annoying would joggers be in the entirely pedestrianised city centre of ‘s-Hertogenbosch?

Complaining about joggers and cyclists amounts to nothing more than fighting over tiny scraps, the crumbs from the feast on the table. If you’re coming into conflict with them, try looking at the tiny pavement you’re forced to share with them, rather than instinctively stereotyping them.

12 Responses to Fighting over scraps