A Waste of Space

Posted on February 8, 2018 by aseasyasriding

In London yesterday evening, I approached Parliament Square along the cycleway at Great George Street.

In front of me was perhaps the classic stereotypical scene shared by taxi drivers, and other people hostile to new cycling infrastructure in London (and other British towns and cities). A large expanse of empty tarmac loomed in front of me, contrasting starkly with the clogged road on the right. You might say the cycleway is ‘causing’ congestion and pollution, if you were so inclined.

In the distance – on the ’empty’ tarmac – two cyclists (maybe three? who cares, really) are waiting at a red signal. On the right, frustrated drivers are needlessly spewing out fumes, and doubtless fuming themselves, at the waste of space on their left. Valuable space that – if it were used properly for important motor traffic, not for some silly hobby – would have sped them to their destination about half an hour ago.

Surely, a superficial observer might think, it would make a great deal of sense to ‘free up’ that tarmac, using it to move all those motor vehicles more efficiently. It’s just obvious, surely? The cycling infrastructure is just a waste of space.

But of course things aren’t that simple. How many people are actually waiting at the lights on bikes? It doesn’t look like many, but it turns out that when you get close there are… five. All tucked together in a small amount of space.

How about that queue of cars and taxis? How many people are waiting there? Must be loads, surely?

Well, one of the taxis in the queue – the white one, three from the front – is carrying… nobody at all.

The taxi at the front of the queue, waiting to enter Parliament Square is also carrying… nobody at all.

A further quick survey of the queue revealed that the other four vehicles in the queue – a Range Rover behind this black taxi, a red taxi behind the white one, the Ford people carrier, and the small hatchback, are all only carrying… one person. (the red taxi has one one passenger). So that means that in my original photograph –

There are more people being moved somewhere on the cycleway (five), than on the road (four). 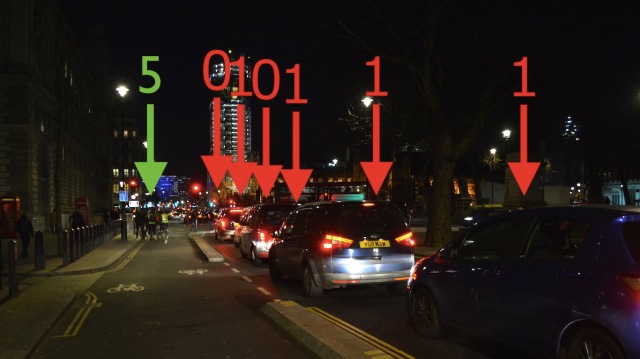 I think this is an extremely common way of misreading traffic flow, and hence misdiagnosing problems. Even I felt instinctively uneasy at what appeared to be a very long queue of motor traffic, apparently being ‘held up’ for the benefit of ‘just a few’ cyclists. It was only when I found out how many people cycling were actually waiting at the lights, and closely examined how many people were actually in the motor vehicles, that I got a objective answer that directly contradicted my instinctive impression. It’s such an easy mistake to make.

Motor traffic seems big, and important. All the noise, the size of the vehicles, the (occasional) speed – it seems like it’s conveying lots of people, and fast. But in reality it’s an extremely inefficient way of moving people around urban areas. Cars take up lots of space, and clog up roads, precisely because of this intrinsic inefficiency. It’s also why photographs are a very poor way of attempting to demonstrate that cycling infrastructure is pointless – it rarely manages to capture the genuine volumes of people being moved on it, relative to the road. What really matters are actual figures on flow, not photographs that are all to easy to misinterpret (or indeed photographs that are used to mislead).

Private motor traffic is the real waste of space. Not cycling infrastructure.

To repeat the ‘experiment’ of the first junction, I also stopped at the next two junctions at CS3, and counted vehicle occupants. Here’s ~20 people on the left, versus five on the right. 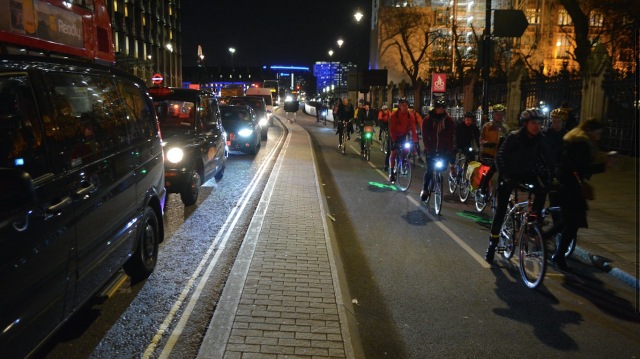 And again. Fifteen people on the right; six in the motor vehicles in the same length (and more width!) on the left

46 Responses to A Waste of Space