Just how good is the cycling infrastructure in Bracknell?

A visit to the Transport Research Laboratory on Friday gave me the opportunity to cycle through Bracknell, a New Town designated in 1949.

A gentleman named Pete Owens of Warrington Cycle Campaign (perhaps most famous for the Facility of the Month site) would have you believe that Bracknell – like many other New Towns – is, in effect, a small piece of the Netherlands, parachuted into Britain.

For 50 years our planners have bought into the “build it and they will come” segregationist hypothesis. Ever since Stevenage, every new settlement in the country has been built around a segregated cycle network. And it is not just Stevenage and MK – though those are probably the most comprehensive examples, but we have a whole premier leagues worth of “baseball stadia” that have been unremitting failures in terms of encouraging cycling. Indeed they have tended to be the most car dependent towns in the country. They built it and they didn’t come … to Stevenage, to Milton Keynes, to Harlow, to Bracknell, to Hatfield, to Telford, to Livingston, to Warrington … the list goes on.

And it really doesn’t wash claiming that this somehow doesn’t count because these were “botched”. They may not quite be up to the standard of the best examples from the NL (although in the ’70s the Dutch took our new-town planning guidelines as their model), but they certainly meet the central requirement that the segregationists claim is stopping people cycling ie people in these towns do not need to mix with busy traffic. [My emphasis]

The broad thrust of this thesis is that we have already tried the Dutch approach in Britain – specifically, segregation – and that it has failed to bring about mass cycling. Instead, so he argues, we should look instead to places in Britain that eschew cycle tracks – places like Hackney, among others – for how to increase cycling levels.

… it is the constraint on motor vehicles (or lack of it) that is the key to getting folk cycling and that building cycle paths (or not) is entirely irrelevent. This is why mainstream cyclists organisations have been making all along and why limiting traffic volumes and speeds (as they do in NL) are at the top of the hierarchy of measures and cycle specific infrastructure as a last resort.

It is notable that those places in the UK that do have some success at encouraging cycling are those that follow this approach and have reputations as anti-car towns. Hull – with the early take up of widespread traffic calming (though they are now slipping), Oxford – which actively discourages through traffic, Central London – with the congestion charge – and particularly Hackney (the only traffic authority in the country where more people cycle to work than drive) where they explicitly reject the segregationist approach.

Regardless of the relative degrees of success of these two different approaches (not something I wish to get bogged down with here), I have to say that Pete Owens gets it very wrong – astoundingly wrong – when he writes that places like Bracknell are ‘not quite up to the standard of the best examples from the NL’. In reality Bracknell is far, far below the standard of even the very worst Dutch cycling infrastructure.

There are, of course, cycling underpasses in Bracknell, that run under the large roundabouts. This means you can cycle across these roundabouts, without interacting with the heavy traffic on them. 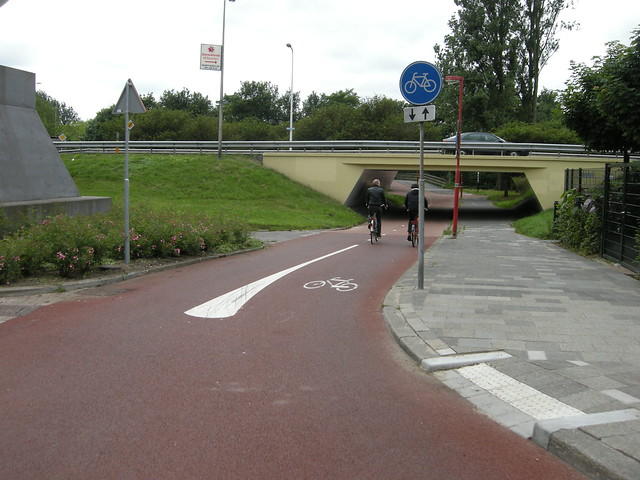 There are also some cycle tracks running around the town. In the main they seem to be some distance from the road network (indeed, if you were driving around Bracknell, you probably wouldn’t ever see a cycle track).

When these cycle tracks have to cross a major road, the solution seemed to be – just as at the large roundabouts – to put the track into an underpass. And in most cases, that means the cycle track has to slope down, then back up again. (You can see how the cycle track in the picture above undulates up and down – this is so the path to the left can pass under a road.)

Note how the cycle track – looking quite tired – slopes down substantially into an underpass, while the roads remain flat and continuous.

Underpasses like this are actually rather rare in Dutch towns and cities, and are typically only employed when a very large junction, usually on the periphery, has to be negotiated. In Bracknell, however, I found myself constantly cycling up and down, through numerous underpasses, just to get around. The picture above is taken only a few hundred yards from the shopping precinct in the centre of town. A flat town has been converted into a  hilly one.

Indeed, it was while musing about the large number of underpasses in Bracknell – and why they are so rare in Dutch towns and cities – that I realised why cycling in New Towns was always going to be doomed. And why, despite claims to the contrary from the likes of Pete Owens – they bear absolutely no resemblance to the Dutch approach.

The only form of ‘segregation’ available to their designers, back in the 1950s and 60s, was precisely of this form – placing roads and cycle tracks on different levels. A kind of vertical segregation, that the Dutch employ only when they have to (crossing railways, for instance) or when the volume of motor traffic necessitates it.

By contrast, where cycling is designed (or ‘designed’) at the same level as a particular road or street, Bracknell is just as pitiful as most other towns and cities in Britain.

Where cycle tracks meet distributor roads on the same level, they just give up. They end. Proper provision ceases if you want to cycle along this road.

Indeed, I was struck by the complete absence of cycle tracks alongside all but the most major roads I encountered, despite copious amounts of space being available (this is a New Town, remember).

These are not attractive places to ride a bike.

And these roads – which connect cul-de-sacs to the main road network – often do not even have pavements, let alone cycle tracks.

Where cycling ‘infrastructure’ does exist directly alongside roads in Bracknell, in almost all cases I saw it took the form of a shared use pavement.

These have all the horrible design flaws you would expect at junctions.

As I have already said, where cycling infrastructure in Bracknell exists at road level, and directly intersects with the motor vehicle network (rather than being placed below it, or far away from it), it is pitiful, with very few exceptions. I did come across this nice junction treatment, but it is a two-way track, shared with pedestrians, and rather over-engineered for the entrance to a cul-de-sac.

The cul-de-sacs themselves – which should theoretically prioritise cycling, by making driving more indirect – are themselves a problem. In many cases, they are impermeable to cycling; they don’t form through-routes, so the most obvious route is the distributor road, which usually doesn’t have any provision at all, beyond a shared use pavement.

Other cul-de-sacs do have access through them onto the cycle track behind, but it’s not particularly obvious.

On the right. Behind the wall. Then around the fence.

Typically, in trying to find the most direct route, you will find yourself bumping along a bit of tarmac, unsure of whether you are on a cycle track, a shared use route, or a footpath, until it becomes clear that it’s the latter.

The ambiguity of these (foot?)paths is obviously problematic, with people apparently cycling in places that were not designed for cycling. Guardrail provides a clue to difficulties or collisions that might have occurred in the past.

And in Bracknell the rule when it comes to guardrail seems to be ‘too much is never enough’.

The pedestrianised centre of Bracknell is enclosed by two concentric rings of road, neither of which have any provision for cycling on them. The outer one looks like this –

And the inner one – ‘The Ring’, which resembles a race track – looks like this –

Did someone say ‘Dutch’?

The final irony is that in ‘cycling friendly’ Bracknell cycling is not permitted at any time in the shopping precinct at its centre (although a van was driving through while I took this picture).

It is a sick joke to pretend that Bracknell – or indeed any other New Town that put in similar ‘infrastructure’ to a greater or lesser extent – is anything like a Dutch town, transplanted to the UK. At the time these places were built, there was only a very limited kind of ‘segregation’ on offer, the kind that places cycling far away from roads, either vertically or horizontally, and that has little or nothing to offer whenever cycling provision has to come into close contact with the road network. Given the way cycling was designed for, the only way in which cycling in New Towns could ever have been a comfortable or viable experience would for it have to been placed entirely on a different level from the road network, which would have been monstrous, as well as impractical.

This shouldn’t really be news; as long ago as 1978 Mike Hudson’s Bicycle Planning Book described how the cycling network in a number of New Towns, including Bracknell, was ‘incoherent and incomplete, and often inconsistent’. (Hudson also states that ‘cycle tracks are absent from Hatfield and Warrington’, which contradicts Pete Owens’ claim that they ‘built it’ in these two towns). That incoherence and inconsistency must surely be a direct consequence of the failure to design cycling in – with both objective and subjective safety – at ground level, and across the entirety of the town, not just the provision of underpasses at the biggest roundabouts.

It would be a little unfair to blame the original designers for these problems. In a way, the networks they built did partly function in the way a Dutch cycle network functions today, in terms of insulating anyone cycling from interactions with motor traffic. This is because, back in the 1960s, there was not the volume of motor traffic there is today. Cycling around on the distributor roads (the ones that have horrible shared use pavements today) would most likely have been fairly pleasant and traffic-free, in much the same way you can cycle around Dutch towns and have very few direct interactions with motor traffic. And in the places where motor traffic would have been substantially heavy and off-putting in these New Towns – at the large roundabouts and alongside the dual carriageways – the cycle tracks (albeit limited and circuitous) were usually provided.

But this kind of separation was fragile, and could never last, because it relied upon people not adopting the car as a mode of transport. As increasing numbers of people began to own cars, so the distributor roads would have become less and less subjectively safe, and less pleasant to use by bike. Over time, these roads have been converted to ‘provide’ for cycling, but only by the apparent legalising of cycling on existing pavements. Modern Dutch-style measures to separate cyclists from motor traffic are almost entirely absent. To that extent Bracknell is essentially no different from any other town in Britain, and not in any way an example of how segregation has failed, or will fail, in this country.

This entry was posted in Bracknell, Infrastructure, Subjective safety, The Netherlands, Town planning. Bookmark the permalink.

18 Responses to Just how good is the cycling infrastructure in Bracknell?