From the press release, the ‘turbo’ roundabout in Bedford will now be under construction – building was scheduled to start yesterday, Monday the 21st of July.

Pretty much everything you need to know about this strange scheme and its convoluted history is here on the Alternative Department for Transport blog. (The Cycling Embassy of Great Britain also hosted a guest blog critically examining some of the claims made for this design).

Presumably in anticipation of construction starting, the local cycling campaign for North Bedfordshire (CCNB) have put out a statement justifying the design. It’s as curious as the scheme itself. Principally it clings to the sad, failed strategy of attempting to design for two different categories of ‘cyclists’ separately, instead of the proven, successful approach of inclusively designing for everyone.

CCNB believes that the dual use scheme will improve the safety of all types of cyclists (and pedestrians). Experienced cyclists will use the on-road carriageway around the roundabout while the less confident, new and young cyclists will use an off-road shared use route using four zebras is a good compromise.

The tighter geometry and enforced lane discipline should slow down traffic over what it is at present. An experienced cyclist adopting the primary position should thus avoid being overtaken or cut-up and as a consequence feel much safer. The lane discipline should also ensure that most motorists know what cyclists are doing and in the same way cyclists should also know what motorists are doing.

Well that sounds attractive, on a roundabout that will still be carrying around 25,000 PCUs per day! And for everyone else –

Current regulations stipulate that cyclists can cycle across zebras if there is a dual use path on either side but unlike pedestrians must give way to motor vehicles. The zebras will be wider than normal and the design will allow easy modification to a more traditional Dutch style junction when the DfT allows cyclists to use them in the same way as pedestrians, hopefully sometime next year.

I am deeply, deeply sceptical about claims this design can be ‘modified’ to a Dutch-style junction, not only because a Dutch-style junction would have perimeter tracks, clearly distinct from footways, rather than shared use areas, but also because the zebras in this scheme cross multiple lanes on the approaches, at sharp angles, a design that is simply not appropriate to ‘convert’ to a crossing. (To say nothing of the appropriateness of cycling on these zebras while waiting for this ‘conversion’).

Will converting these zebras to ‘cycle zebras’ amount to a ‘Dutch style junction’?

The roundabout is generally very busy mainly in the short morning and evening rush hours. The area concerned is fairly small and it is not possible to have Dutch style off-road cycle tracks along any of the four roads involved. [my emphasis].

Really? Looking at the four roads involved – the four arms of the roundabout – in turn – 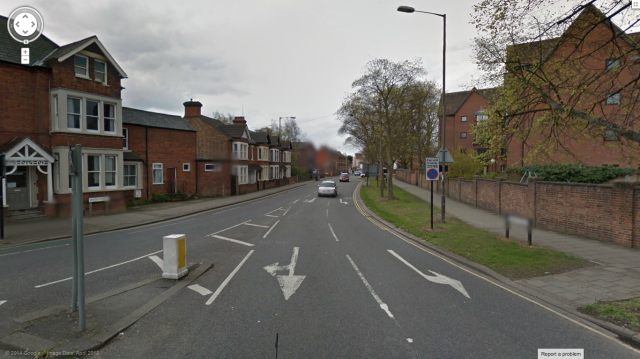 It is plainly possible to accommodate cycle tracks on these approaches. And you don’t even need to believe me –

In the application, the designer submitted a mocked up version of what the roundabout could look like with a ‘proper’ Dutch design, including side road priority for cyclists on fully segregated cycle tracks and tight curve radii to slow vehicles.

That’s right – the designer of this scheme presented a possible version of this roundabout, with cycle tracks on entry and exit. Here it is! 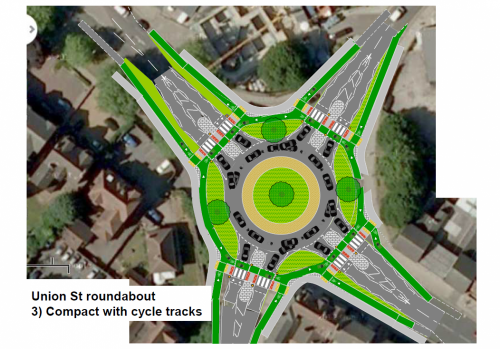 As the CTC report, Bedford Borough Council vetoed this design on the grounds that it would affect motor traffic capacity; having one lane on each of the approaches wouldn’t be sufficient to cope with current volumes of motor traffic.

So – faced with the intransigence of the council, and the ludicrous constraints of the the DfT’s Cycle Safety Fund – it would be understandable if the local cycle campaign admitted defeat, and grimly accepted this being forced on them, while grumbling about it. But to actually come out and support this dog’s dinner?

11 Responses to Turbogate gets weirder