Cycling is only as discriminatory as we make it

Posted on September 22, 2014 by aseasyasriding

The Birmingham Post has published an excellent response to the claims from Councillor Deirdre Alden that cycling is in some way discriminatory. It’s worth reading in full, despite the headline about ‘sport’, which presumably has been added by a sub-editor.

At the start of this article we discover that Alden was not the only councillor making these kinds of comments. Councillor James Hutchings apparently argued that ‘hordes’ of cyclists would have ‘a severe impact on pedestrians and motorists’, before stating

It’s highly discriminatory for relatively few people who don’t pay any money, who don’t insure, and I do think we do need to get away from the pretence that cycling is wonderful for everybody. Loads of pedestrians will be put at greater risk.

If there genuinely were ‘hordes’ of people cycling on Birmingham’s enormous roads, that would not have a negative impact on motorists (let alone a ‘severe’ impact) – it would be a positive one, because it would reduce the lengths of queues, and congestion more generally. Cyclists don’t come out of nowhere – they’re just people who would have been making trips by other modes.

Hutchings then argues that attempting to improve conditions for cycling would be ‘highly discriminatory’, apparently on the basis that he doesn’t see elderly people cycling, or ethnic minorities cycling (with or without hijabs) or disabled people cycling. (Note that his argument is anecdotal, not based on any evidence.)

His comments mirror those of Cllr Alden, who argued

The vast majority of cyclists on our roads are young, white men… most elderly people are not going to cycle, and it would be dangerous for them to start on our streets now.

Women of any ethnic group who wish to wear modest clothing, and I count myself in that category, are not going to cycle. It is a discriminatory form of transport

Alden stood by these comments in a later interview –

In asking for the assessment, I made the factual observation that most, not all, but most, of the cyclists I see in my area are young white men. Of course I know some elderly, disabled, women and people from all ethnic groups cycle. But clearly many in Birmingham – for lots of reasons – don’t feel they can. Surely it would be better to spend some of the cycling money in ways which would help those groups who don’t currently choose to cycle?

And also clarified her position in Cycling Weekly –

None of the £24 million is being spent on lighting the canal tow path which would enable safer cycling. It is all being spent on the road and this can put cyclists off. It is only helping current, confident cyclists – not new cyclists and all sections of society.

There is a scheme in a local Edgbaston park that is encouraging Asian women to cycle which is great but we’re talking about roads here.

Now I have to say here that Alden is actually making a sound argument. If the improvements being made to the roads are only marginal, then I think she is right to say that the money is being spent in a way that could be discriminatory. If the funding, for instance, is being spent making cycle lanes a bit wider, or painting ASLs, or other measures that are not at all attractive to children, or the elderly, or those with disabilities, then yes, the only people benefiting will be those who are cycling already, who are disproportionately male and middle-aged.

I’ve only managed to have a cursory look at the proposals for Birmingham, so forgive me if I get this wrong, but certainly it seems as if some of the schemes might fall into this trap. For instance – 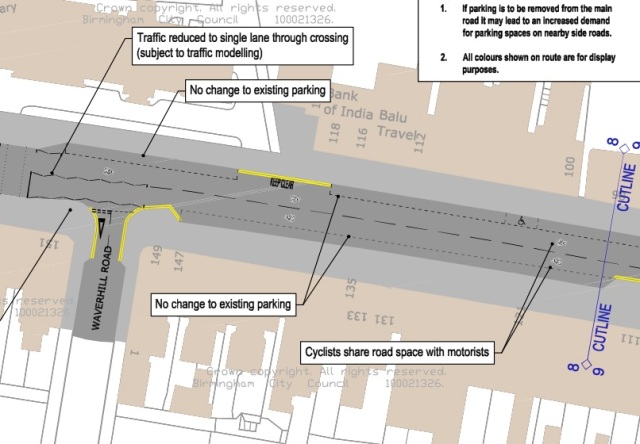 This is on the A41 Soho Road. Does this look like an environment in which some painted symbols in the carriageway will make cycling attractive to all?

Elsewhere we have a cycle lane alongside a dual carriageway, with loading allowed in the cycle lane. 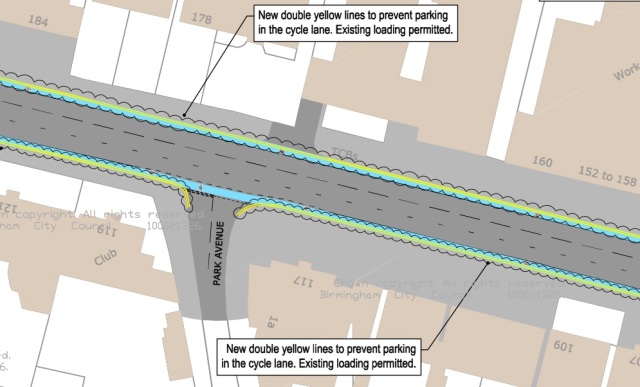 So, while there are better parts to these proposals, some of the money Birmingham has won from the Department for Transport would seem to be being spent on schemes that are not inclusive – ‘only helping current, confident cyclists’, as Alden puts it.

Whether these arguments are being made in good faith or not is hard to say; the picture is muddied by her comments about cycling being something that certain groups of society simply won’t engage in, regardless of the quality of the environment. Cllr Hutchings’ comments fall more overtly into this category; that ‘cyclists’ are a small subset of the population – compared to ‘the rest of the population’ – who don’t deserve any money.

What can be said is that cycling is only as discriminatory as we make it.

The reason why cycling is limited to certain groups, in certain places and along certain roads, is because the environment excludes others. Riding a bike – or using pedal power more generally – is something that nearly everyone can engage in, if the environment is right. Even those who don’t cycle, and use mobility scooters and wheelchairs to get about, would benefit from a quality cycling environment. 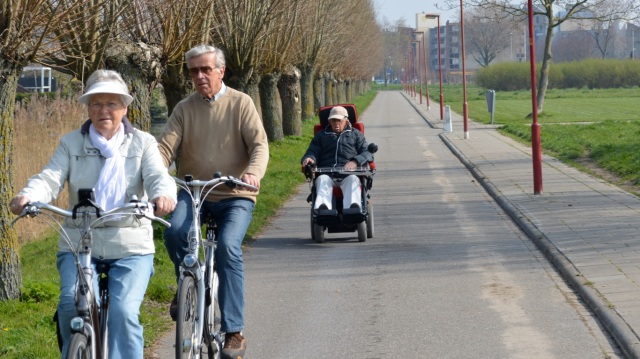 Independent mobility, on a cycle track in Zoetermeer

Headscarves don’t seem to be a problem in Utrecht

So while it is true to say that cycling is a mode of transport that many people are excluded from using in cities like Birmingham, that in itself is plainly not an argument for maintaining the status quo. If children and the elderly do not feel comfortable cycling on dangerous roads, then rather than shrugging our shoulders and doing nothing, while wailing about how cycling is ‘discriminatory’, that state of affairs should be remedied.

BUT we need changes to roads and streets that open them up to all potential bicycle users, not marginal adjustments that make things slightly better for the few currently willing to cycle on them. Buried in the rhetoric from those councillors in Birmingham is a substantive argument.