Thinking outside the box

Posted on January 8, 2015 by aseasyasriding

Urban Design London have recently released some new guidance (in draft form), entitled the ‘Slow Streets Sourcebook: designing for 20mph streets’. This manual – like other ones I have commented on recently – has revealing design recommendations for ‘cyclists’.

These are the kinds of recommendations that show the authors are only really thinking about ‘cyclists’ as the people who are cycling already, not anyone who might want to ride a bike – from a very young child, to someone in old age.

To take just some examples from this guidance –

Carriageway widths below 3m encourage cyclists to take up the ‘primary’ position in the middle of the carriageway, making it more difficult for vehicles to overtake cyclists. [my emphasis]

Whether being used as a mobile roadblock is something the person cycling would actually enjoy is, it seems, not considered. Likewise, I doubt the authors of this passage reflected on whether it is reasonable to expect, say, a young child to take up a position in the middle of the carriageway in response to it being 3 metres wide.

A young child cycling beside a bus, in her own space, in the city of Utrecht. Should we be expecting children like her to cycle in the middle of the road, in front of that bus?

And, in a longer passage –

There are a variety of ways to indicate that the priority lies with cyclists and/or pedestrians and that drivers should slow down. Segregating or separating suchusers from vehicles may dilute their influence on driver behaviour. Therefore when thinking about designing for sub-20mph behaviours, integration may be the optimum choice. However, when designing with cyclists in mind, their needs should be fully considered to ensure that they are not put at risk.

Integrating cycling into narrower carriageways can encourage all road users to engage better with each other. This can also help retain a constant, but slower, traffic flow. This treatment is shown with a bicycle sign painted on the carriageway. Care is needed when designing junctions to ensure cyclists are visible and not ‘squeezed’ by turning vehicles.

There are some photographic illustrations of these kinds of designs.

Unfortunately the narrow carriageways which ‘integrate’ cycling in this example – note the helpful bicycle symbols ‘encouraging’ people to take up the primary position – also appear to be rather busy in this particular location. 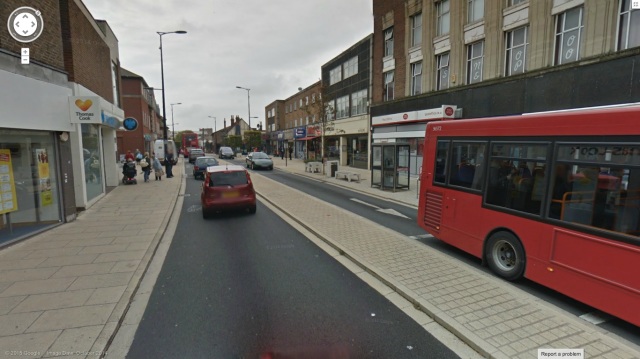 TfL run five or six bus routes along this road, in addition to the seemingly copious private motor traffic. Is ‘integration’ here really something we should be aspiring to? Is this the kind of environment that will appeal to people who currently don’t feel willing or able to cycle in Britain?

I doubt it. In truth these kinds of designs are a way of integrating existing cyclists into the road network; they are not conceived with the needs of those people who aren’t cycling in mind. Consequently they will do little or nothing to address the problem of Britain’s cripplingly low levels of cycling.

Without wishing to single any particular comment out, there was a delicious recent example of this way of thinking below Diamond Geezer’s detailed blogpost about the proposed Superhighway 2 upgrade between Aldgate and Bow roundabout.

A busy cycle route yet I did not see any cyclists in your photos.

Well…. duh! The reason there aren’t ‘any cyclists’ is because the road in question is, well, atrocious.

This upgrade is needed precisely because there aren’t any cyclists; because it’s a hostile, scary and actually lethal road, even for those few who are brave enough to cycle on it. Yet ‘John’ appears to believe that proposals to build cycling infrastructure along this road are unjustified, because very few people are cycling there at present.

This kind of thinking is understandable from members of the public, who simply don’t see cycling as a potentially universal mode of transport, because they are not surrounded by evidence that it is. They need to be persuaded otherwise, to be shown how cycling could work for everyone, if we invested in changes to our roads and streets.

But a failure to ‘think outside the box’ is far less acceptable from politicians, councillors, engineers and transport planners – the people we are relying on to bring about the changes in cycling levels that they all say they want to see. This broader failure is displayed in a hostility to cycling that only makes sense when you appreciate that the objector is thinking in terms of ‘cycling’ as it is now in British towns and cities; something for fast (usually male) adults, or for anti-social yobs.

The town where I live has an unspoken policy of keeping cycling out of the town centre as much as is humanly possible, apparently on the grounds of it introducing danger and uncertainty to ‘pedestrians’. Their attitude betrays that they plainly aren’t thinking about these kinds of Horsham residents when they consider cycling –

Instead they are thinking only in terms of the cyclists they encounter when they are driving around the town’s roads – people striving to travel at the speeds of the motor traffic that surrounds them. The councillors are not thinking outside the box.

The Royal Parks in London appear to be exhibiting a similarly close-minded view of cycling; in their response to the East-West Superhighway consultation (see this more detailed post from Cyclists in the City), they argue that Serpentine Road (among other roads and routes in Hyde Park) is

this objection really shows that the Royal Parks are thinking of ‘cyclists’ in terms of a stereotypical lycra-clad horde, tearing through the park, rather than as the kinds of people you see cycling on very similar routes in Amsterdam’s equivalent park, the Vondelpark.

Would these kinds of ‘cyclists’ be so objectionable on Serpentine Road?

The Royal Parks are not thinking outside the box.

Finally, here’s an example from New Zealand of a new ‘cycling’ scheme, built around catering for existing demand, rather than for the people we need to reach.

… let’s put it this way. I always know if a cycleway has been designed right. The #NinjaPrincess is my expert in such matters. She is one of the customers whose needs should be considered most highly when such infrastructure is being designed and built.

… It is certain that every box in the performance specifications, set by the traffic engineers, has been ticked. But that is no guarantee that it will be a design that is conducive to the wider range of the 8-80 demographic. There is a difference between surviving and flourishing.

So while I don’t pretend to have the expertise of the traffic engineers who have installed this new infrastructure, nor do traffic engineers have the same valuable world view that the #NinjaPrincess possesses. It would be nice to think that her view has some value in the process of designing and building cycleways.

Well, exactly. I have my own ‘Ninja Princess’ – my own barometer of whether a scheme that purports to ‘encourage cycling’ will actually do so. My partner. She can’t drive, so cycling can and should fit her like a glove for the short trips she makes in urban areas. But she doesn’t cycle where we live. When we go on holiday to Dutch cities, she’ll leap on a bike; likewise, when we find traffic-free trails in places like Bath or Bristol, she’ll pedal for ten, even twenty miles, without even realising it.

But please don’t try to ‘integrate’ her into carriageways like this.

As with the previous example of Hornchurch, this is not somewhere she is going to be happy cycling. At all.

You will fail. She doesn’t want to be ‘integrated’ – she just wants to feel safe and comfortable.

If we’re serious about increasing cycling levels in Britain, shouldn’t we listen to people like her? Think outside the box of existing demand.

16 Responses to Thinking outside the box