This post is part of an ongoing series examining how West Sussex County Council are managing to spend £2.4m of Local Sustainable Transport Fund cash (won from the DfT back in 2012) on schemes of negligible ‘sustainable’ benefit, with a particular focus on cycling.

The aim is to show how the money that councils receive for cycling from central government (tiny amounts, relative to the scale of the overall transport budget) is being dribbled away, thanks to a combination of tight timescales, limited or insecure funding streams, no continuity of local expertise, poor or non-existent guidance, and local prejudice.

Two previous posts have described how

In other words – two schemes that do next to nothing to make cycling a more viable and attractive mode of transport, at a total cost of £310,000.

The focus in this post is on a further £30,000 of that LSTF cash, which has been spent, badly, on cycle parking in Horsham town centre.

This sum is as large as it is because of an underspend in a proposed LSTF funded cycle route across the town. The original budget for this route was £320,000; this was scaled down to £180,000 once it became apparent that very few interventions were actually planned. That underspend has consequently been redistributed to projects like the parking described here.

£30,000 would buy you an awful lot of sheffield stands – the kind of parking that is appropriate in a town centre location. However, most of this £30,000 appears to have been spent on three two-tier cycle parking stands, of this type – 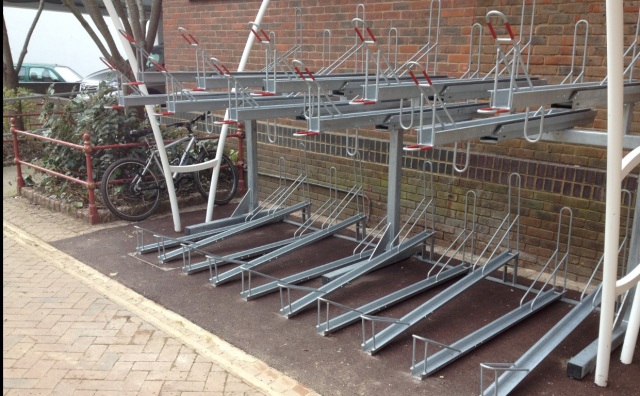 This kind of cycle parking is unsuitable for a town centre location, where people will generally be locking their bikes up for short periods of time – to visit shops, restaurants, friends, and so on.

Two-tier parking only really makes sense at locations where people will be leaving their bikes for longer periods of time, and where demand is particularly high. At transport interchanges like railway stations, two-tier parking like this is an obvious choice, because people won’t mind so much the effort of lifting their bikes into these racks if they are leaving the bike for an entire day.

It doesn’t make any sense at all, however, if you are just popping into a supermarket. Yet this is the kind of parking that has been chosen.

Worse still, the locations for these stands have been selected by Horsham District councillors, quite deliberately, with the intention of discouraging cycling in the town centre.

Helena Croft (Con, Roffey North, HDC’s cabinet member for Horsham town, said: “I am delighted that the provision of town centre cycle parking is being improved in this way, making the centre more accessible by a more sustainable form of transport.

“There are currently no covered cycle shelters in the centre of Horsham and cyclists are often seen penetrating areas which should only be used by pedestrians. These new shelters will help clear the pedestrian zones and motivate more people to cycle into town. It will also contribute towards less traffic congestion in the centre so it’s a win win all round.”

Cycling in Horsham town centre is unfortunately viewed as a problem, and sustainable transport funding has been used to place inconvenient cycling parking in inconvenient locations in a futile attempt to keep cycling out of it.

I say ‘futile’ because most of the town centre is already legally accessible by bike, and where people are cycling in genuinely pedestrianised areas, they are usually doing so either because a contraflow has not been provided on the sensible alternative, or because the parallel road is deeply hostile. Placing cycle parking at the extremities of the town centre will do nothing to change this behaviour, and it’s unsettling that tens of thousands of pounds of DfT cash is effectively at the whim of councillors who can make stupid decisions like this.

Here’s where the parking has been placed. One of the racks has been located behind one of the town’s car parks, tucked away in a corner. 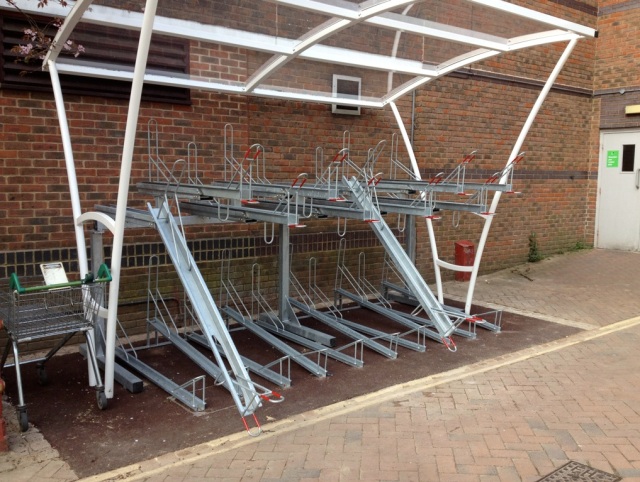 This couldn’t really be much more inconvenient for the shopping areas nearby. 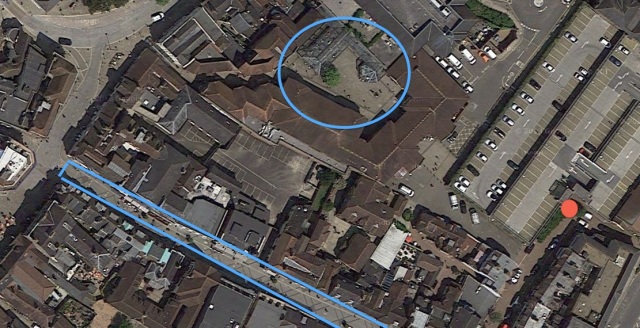 These racks remain empty, while the pre-existing sheffield stand parking nearer the shops (on the sensible side of the car park) continues to be busy. 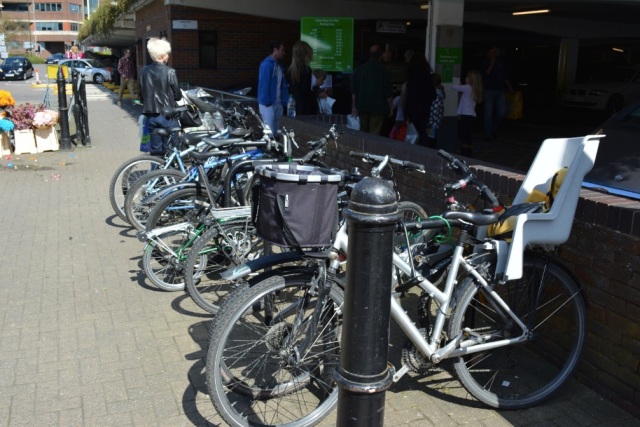 The second of these two-tier stands is an even more ridiculous location, plonked right next to a busy shared use path, meaning getting bikes in and out of the rack blocks it – 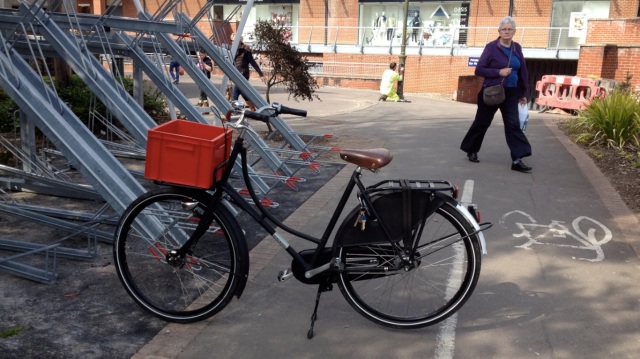 … and also sited well away from the two obvious nearby destinations, the library, and a Sainsbury’s supermarket.

Again, this rack remains empty, while the parking at Sainsbury’s and the library is in use – because that parking is near where people want to visit. 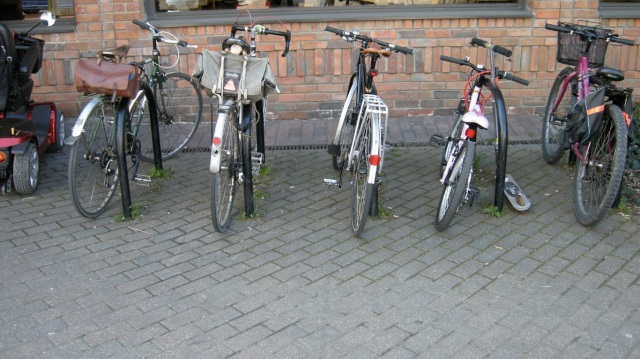 The final two-tier stand is actually in a reasonably good location, closer to town centre shops, and next to an existing informal parking area.

But again, it’s being almost entirely ignored, with people opting for the existing (easier to use) railings – 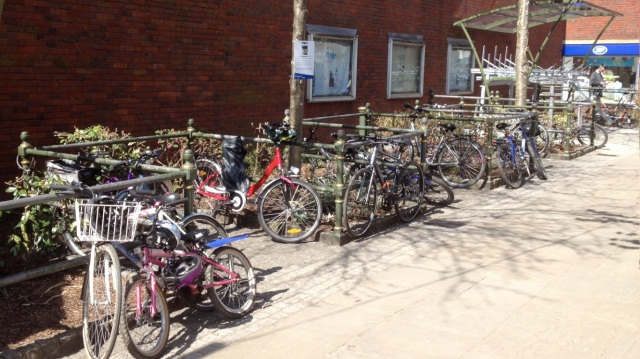 … or sheffield stands nearby – 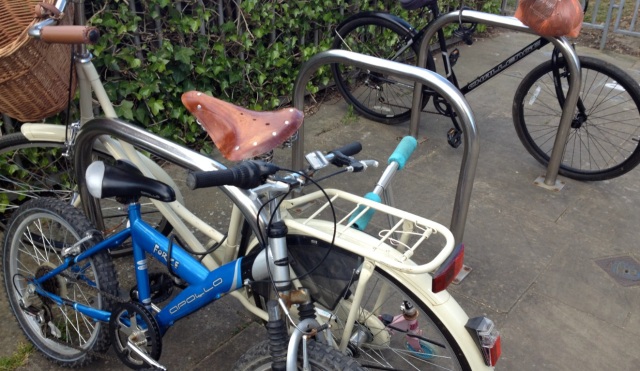 … or even lampposts closer to the shops. 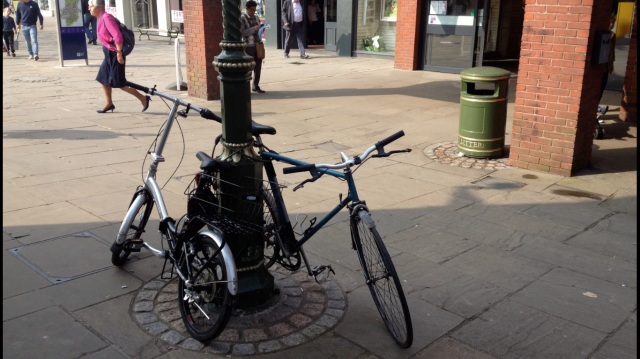 None of this should be surprising. The Horsham District Cycle Forum consistently argued against these types of two-tier racks, and the principle of locating them in out-of-the-way areas. Yet these stands, in these locations, were implemented regardless.

They’re not even very good stands. In fact they’re dire. My (fairly standard) Dutch bike won’t even fit in them. 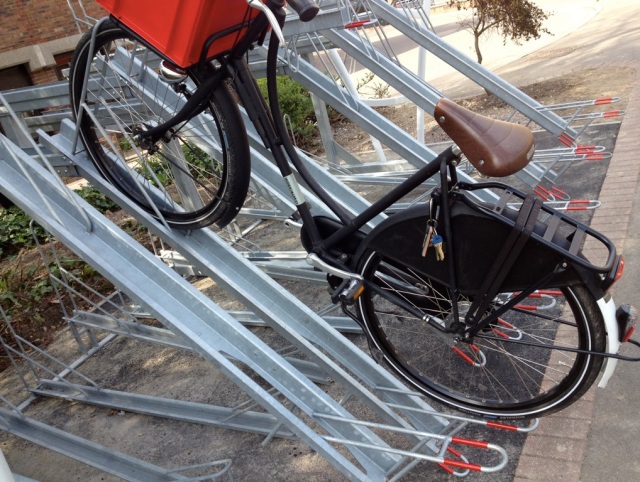 There’s also nothing to actually lock your bike to, which needless to say is a problem if you want to leave your bike for any length of time and expect to come back and still find it where you left it.

It’s difficult to roll your bike into their upper tier (thanks to those metal bars that mean my bike doesn’t fit) – the manufacturer’s own video shows that bikes have to be lifted some height off the ground, and deposited in the rack. Not easy for most people, especially those with utility bikes. 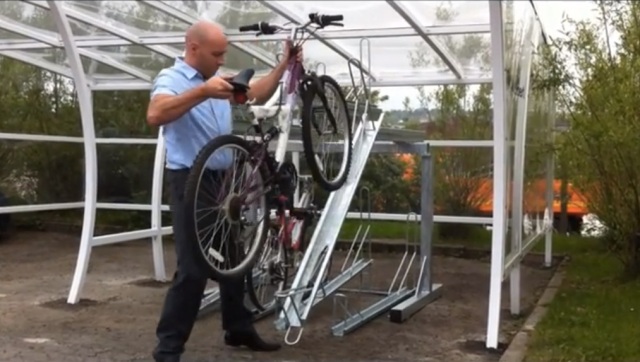 And without any hydraulic or spring assistance, you need to be pretty strong to lift your bike back up to a horizontal position. I can barely manage it, like this commenter on the local paper website –

I’ve just come back from looking at the new rack installed in Medwin Walk. I’m an active, fit, burly, six-foot-two-er, and my bikes are light. I’d struggle to load one onto the top deck of the new rack. Unlike the racks at the front of Horsham Station this new one has no spring or strut assistance on the top deck and is missing a dedicated locking point on each rack. So how someone smaller, less strong, and with a heavier bike than me is supposed to cope with using the rack is beyond me.

The final nail in the coffin is that they’re actually quite dangerous.

Which means that they are now taped off, out of use, awaiting some kind of solution. (Entirely different cycle parking, perhaps?) 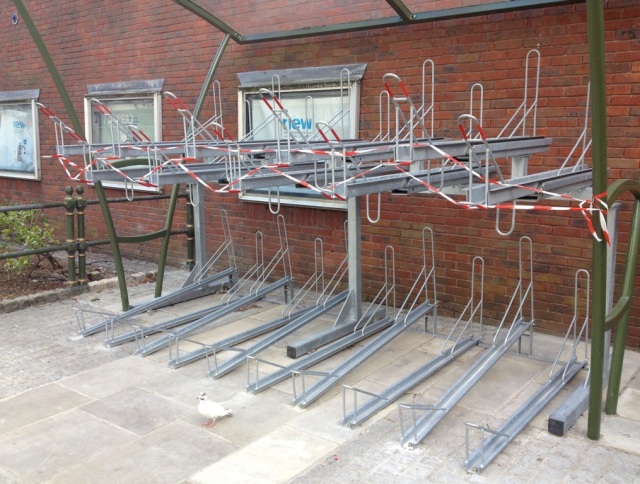 Sadly, this looks like yet another waste of tens of thousands of pounds of DfT cash, to add to the money squandered on the projects already documented.

What is frustrating is that some of the LSTF cash has actually gone on good new sheffield stands, in sensible locations, which I have noticed are already well-used, despite only being in place for a matter of days. These ones were being used even before the cones had been taken away. 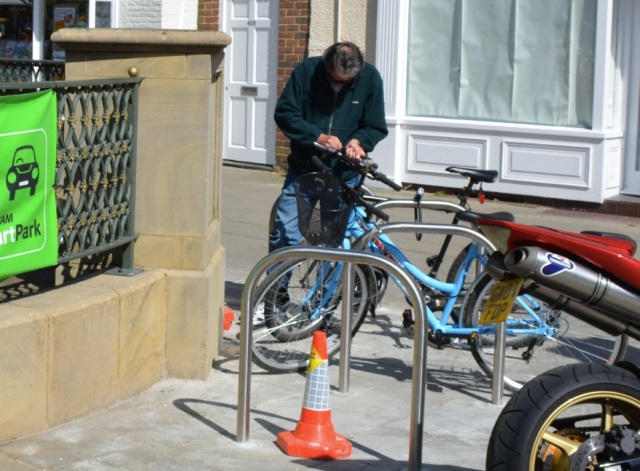 £30,000 could have bought a lot of this kind of parking, in the right kind of places. But instead it’s been spent almost entirely on impractical parking in inconvenient locations, of such a poor quality I can’t see a solution without the stands being entirely replaced. It’s depressing that something as simple as cycle parking can’t even be get right. The waste continues.