Bus lanes are not cycling infrastructure

Posted on November 3, 2015 by aseasyasriding

A fairly self-explanatory post, this one. Bus lanes are not cycling ndeednfrastructure.

There are lots of reasons why they shouldn’t be, which we’ll come to, but it might be worthwhile looking first at how we’ve ended up thinking that they are cycling infrastructure.

The main reason seems to be, in no particular order;

They’re better than nothing. Better than not being allowed in bus lanes at all, which is (bizarrely) the case in Crawley –

No cycling in this bus lane. Gatwick Road, Crawley

And better than crap cycling infrastructure (for those people confident enough to cycle in bus lanes). This is indeed the position taken in LTN 2/08, Cycling Infrastructure Design –

Bus lanes form an important part of cycle route networks. They are often placed on primary transport routes, providing cyclists with direct routes to town centres and other important destinations. Bus lanes are generally popular with cyclists (Reid and Guthrie, 2004). They are often preferred over off­road facilities as a result of the advantage of remaining in the carriageway and therefore having priority at side roads (Pedler and Davies, 2000). Cyclists in bus lanes are able to avoid queues, and they value the separation from general traffic that these lanes afford

As Joe Dunckley has written about this passage

This is the guidance for providing for bicycles and it can not even imagine a world in which bicycles might have priority over turning vehicles… The authors of LTN 2/08 can’t imagine that world — can’t imagine that there could be any alternative to our might makes right of way world.

Bus lanes are only ‘an important part of cycle networks’ if you have very low horizons; that you can’t imagine any kind of ‘provision’ for cycling beyond a choice between crap off-road provision, general traffic lanes, and bus lanes.

It turns out – if you read the Reid and Guthrie report quoted in the passage in LTN 2/08 – that bus lanes are only ‘popular with cyclists’ because they’re less crap than the alternative of… ‘no bus lanes’.

The principle finding was that cycling in bus lanes was very popular with cyclists, compared with cycling in the typical traffic conditions of the area. [my emphasis]

On the negative side, bus drivers and cyclists appeared to have a generally low opinion of each other and it is recommended that efforts be made to address their mutual concerns. This may be achieved by reducing the opportunity for conflict, which appeared to be directly related to the narrowness of the bus lane, and by educating both classes of users as to each others’ needs.

Cycling in bus lanes creates antagonism, which is unsurprising given the different needs and requirements of these two modes of transport. Note that the only solutions proposed for reducing this antagonism are education, and widening the bus lane.

Buses are not usually as fast as other motorised traffic, although at times, they exceed what cyclists might consider to be a desirable speed.

Again, this is the ‘desirable speed’ in the opinion of cyclists, not the general public. A bus travelling at 20-30mph isn’t at all ‘desirable’ for the people who aren’t already willing to cycle with motor traffic.

cyclists feel more threatened by buses than they do by cars, probably because of their greater size… The acceptable passing distance for overtaking buses on the highway is, therefore, likely to be larger than the acceptable distance of overtaking cars.

The report considers that an in-lane overtake by a bus, within a 4.2m wide bus lane, ‘might be considered safe by 100%’ of cyclists, based on 1970s research about acceptable passing distances. Again, digging out that research reveals that this is based on a sample of just 25 cyclists, ‘most representative of the national cycling population’ – i.e. drawn from people already cycling on the roads in 1978, who were likely to have a much lower threshold of ‘acceptability’ in overtaking compared to people not cycling.

Acceptable for ‘cyclists’? Or for anyone else?

So the research and recommendations examined here are based around the preferences and value judgements of existing cyclists – not of the people who aren’t cycling at all, but might like to – and also framed around the relative benefits of cycling in bus lanes compared to general traffic lanes, not compared to the benefits of cycling in dedicated cycleways, separated from both buses and general traffic. 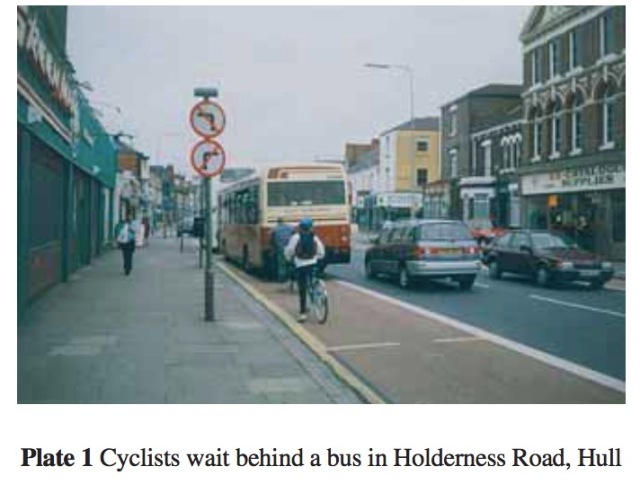 From page 11 of the TRL report.

Most negative comments focused on problems at the bus stops, e.g. ‘bus stops in cycle lanes are dangerous for cyclists’, ‘They’re fine except for buses pulling into stops’ and ‘Dodgy at bus stops’. Other negative comments included, ‘They’re very unsafe as buses are inconsiderate and don’t heed cyclists’, ‘They are dangerous – a contest between cyclist and bus driver’.

Other revealing comments from users include the need for some form of separation of cycles from buses, for instance by means of a cycle lane –

Other comments included, ‘Saves buses and cyclists time, stops leapfrogging’… ‘Not logistically possible, would need to go round bus stops’ [not possible?] … ‘Need a kerb between buses and bikes’, ‘Wouldn’t feel under pressure to go faster if buses were behind’ … ‘I don’t like holding buses up, don’t like feeling buses behind me.’

And to be fair, the report does take this feedback on board, but only by suggesting bus lanes should be wide, and that advisory cycle lanes ‘should’ be provided inside 4m+ bus lanes, and that ‘more research is necessary into the optimum methods of resolving conflicts and delay to cyclists at bus stops’.

Overall, this is a very weak basis for trumpeting the benefits of bus lanes for cycling, and indeed for suggesting that they are an ‘important part of cycle route networks’, as LTN 2/08 goes on to do. This claim is only really justified on the basis of the alternatives being even more dismal; the research used actually shows that buses and cycling sharing the same space does not work well, at all, for either party.

This isn’t just about cycling; if we’re interested in greatly increasing cycling levels, and broadening the cycle demographic beyond the existing ‘traffic tolerant’ group, then that’s going to create serious problems for bus journeys. Putting young children and the elderly in bus lanes just means that buses will be trundling at very slow speeds.

Of course, even if we do theoretically manage to achieve this level of cycling in bus lanes, more generally putting large numbers of people cycling in them just won’t work. Buses would be swamped with people cycling swarming around them; journeys by bus would be painfully slow.

This is one of the main reasons cycling is not accommodated in bus lanes in the Netherlands. Buses are treated almost as more of a light rail mode of transport, with stops less close together, along high speed direct bus corridors, free from things that might slow the buses down.

And of course the other substantive reason why cycling is separated from bus lanes is safety. Buses are large, heavy objects that travel faster than people cycling, and have the potential to seriously injure, or kill. Sustainable Safety demands that these two modes of transport should be separated as much as is possible.

With all this in mind, it’s pretty disappointing that the message doesn’t seem to be coming across clearly and simply in UK cycle campaigning. Hearteningly, the London Cycling Campaign has adopted policy – described here by Rachel Aldred – making it fairly explicit that bus lanes are not cycling infrastructure.

… Too often decision-makers assume zero-sum trade-offs between sustainable modes. But separating buses and cycles at network or street level may provide benefits for both, such as time benefits. We believe decision-makers should consider wider benefits of providing well for cycling, such as better public realm, improved health, and increased mode choice.

And some of this clarity has started to filter through to road designs in London. The higher standard Superhighways now being in the capital do not (for the most part) lump cycling in with buses, but provide protected space for cycling, separated from general motor traffic and from bus flows.

But it seems that there is some unfortunate inertia in other areas of cycle campaigning. Sustrans’ recent Bike Life survey had this unhelpful graph included within it.

Not only are ‘bus lanes’ (along with shared pavements) described as ‘measures to encourage cycling’, but it is possible to draw the mistaken implication from this graph that 61% of people who do not ride bikes (but would like to) would be happy or willing to cycle in bus lanes. This isn’t the case; 61% of this group have merely said that bus lanes might help them start cycling, which is quite a vague statement. 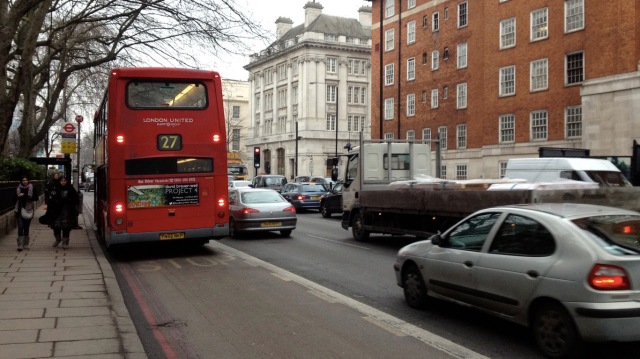 And unfortunately the CTC aren’t particularly clear on bus lanes either. This December 2014 Cycling and Local Transport briefing is useful, but is unhelpfully woolly on whether bus lanes are acceptable –

On both residential streets and rural lanes, low traffic speeds should preferably be achieved through quality design, to make the street or lane feel like it is primarily for people not motor vehicles. Cruder forms of traffic calming, such as road humps and narrowings can be unpleasant and unsafe for cyclists. On busier urban roads, some form of dedicated space for cyclists should be provided. Alternatively, this may include use of decent width bus lanes or on carriageway cycle lanes, preferably with coloured surfacing. It may also include cycle lanes created from carriageway space involving physical segregation both from motor vehicles and pedestrians, where the relevant highway authority has the will to do this to a high standard. Where there is insufficient space for this, the aim must be to reduce traffic volumes and/or speeds, so that cyclists can share the road safely with the other traffic using it. [my emphasis]

Bus lanes might be okay for ‘cyclists’ – they’re marginally better than the alternative of cycling in general traffic lanes, and I must admit I do feel a slight easing of tension once one appears, knowing that I have slightly less to deal with.

But they’re not acceptable if we’re designing for all ages and abilities. Nor is putting cycling and buses in the same space acceptable for bus passengers, in the long term. There needs to be clarity that these are two very different kinds of transport, and that while fudging them together might be acceptable in the absence of any other alternatives, bus lanes are most definitely not cycling infrastructure, nor should they form any part of a serious modern cycle network.

30 Responses to Bus lanes are not cycling infrastructure