Posted on January 27, 2016 by aseasyasriding

People drive around in dark coloured cars. There’s no stigma if you happen to use a car that’s black, or dark blue, or dark grey. It’s normal.

Likewise people walk around in dark clothes without even thinking about it. Campaigns to get pedestrians (i.e. people) to wear hi-visibility clothing will always fail, because donning special uniforms just to walk about is frankly absurd.

People walking, cycling, and driving, in black. And one person in a yellow jacket.

Yet the common refrain is that anyone cycling around in ordinary clothing is ‘invisible’. This ‘invisibility’ opinion was even voiced, yesterday, by the Vice Chair of the All Party Parliamentary Cycling Group, Meg Hillier – enthusiastically endorsing Robert Goodwill’s call for people to wear hi-viz clothing.

It’s highly unlikely that Hillier would argue that too many pedestrians are ‘invisible’ simply because they aren’t wearing special safety jackets. We expect to be able to cross roads, and to use zebra crossings, wearing the clothes we wear on a daily basis, and we expect to be seen, by other people walking or cycling about, or driving about. Likewise it’s unlikely she would argue that dark cars are ‘invisible’ because they aren’t dayglo yellow, or because they don’t have reflective strips plastered all over them.

What the ‘invisibility’ claim amounts to, therefore, is an assertion that anyone riding a bike should make some kind of special effort to be seen, an effort above what we expect people walking or driving to make. But why? What is is special about riding a bike, compared to walking about or driving, that necessitates this extra effort?

Certainly you could argue that people cycling are vulnerable, not having the extra protection afforded by the metal cage that surrounds car occupants – but precisely the same is true of pedestrians, who are struck with appalling regularity by people driving cars.

You might – alternatively – argue that a person on a bike is less visible than a (dark) car. But is this really true? There is the notorious problem of ‘look, but failed to see’ – this is where drivers look, but simply don’t perceive someone on a bike, or a motorbike, because they failed to fit into the template of objects the driver is expecting to look for.

And there is good evidence to suggest that making the objects people fail to see more ‘conspicuous’ has no effect on whether they would fail to continue to see them in future. Here, for instance, is an intriguing study which suggests police vehicles parked at the side of roads shouldn’t use their lights – and should park sideways – to make them appear less like a moving vehicle, and more like a stationary one.

results suggest that ‘looked but failed to see’ accidents may arise not because the parked vehicle is di􏰚fficult to see, but for more cognitive reasons, such as vigilance failure, or possession by the driver of a `false hypothesis’ about the road conditions ahead. An emergency vehicle parked in the direction of travel, with only its blue lights flashing, may encourage drivers to believe that the vehicle is moving rather than stationary. Parking at an angle in the road, and avoiding the use of blue lights alone while parked, are two steps that drivers of parked emergency vehicles should consider taking in order to alert approaching drivers to the fact that a stationary vehicle is ahead.

The issue is one of perception, not of ‘visibility’ – making things more ‘visible’, even a police car, simply won’t work. Likewise a Department for Transport study found that ‘failure to see’ errors occur more frequently during the day –

suggesting that they derive from failures of attention, perception and cognition, rather than being of sensory origin.

In other words, drivers are simply not looking for things they are not expecting – the actual conspicuity of the object they fail to see is immaterial. We shouldn’t therefore expect these particular kinds of problems to be resolved by making people more yellow, or more reflective, because drivers will still be looking past them, looking for different things. (Genuine solutions to these kinds of problems should involve reducing the visual and task load on drivers).

If someone is actually looking, then, is someone on a bike any less visible than a car that is equivalently dark? 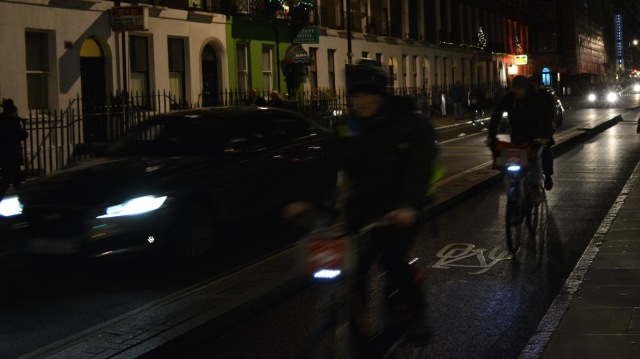 To me, at least, the people cycling on the right – even with the fairly weak lights on the London hire bikes – are effectively just as ‘visible’ as the dark car on the left.

And modern Dutch bikes (and presumably many other types of cycles) come equipped with a range of lights and reflective elements that push their ‘visibility’ higher than that of a car. My bike has reflective sidewall tyres.

Viewed from the rear, it has a white mudguard, two rear reflectors, as well as a rear light, and the standard orange pedal reflectors.

And the front obviously has a bright white light, surrounded by a reflector. Note also how the reflective sidewall tyres stand out in this shot, as well as the pedal reflectors. 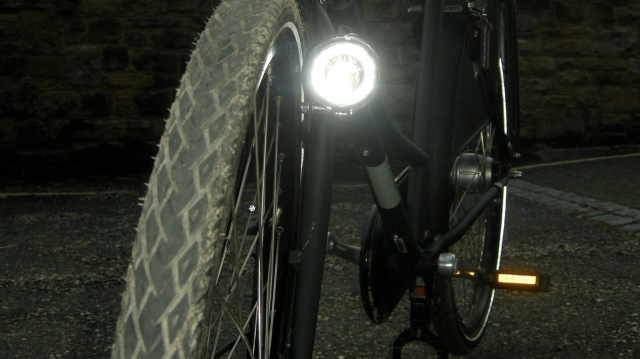 All of this equipment is built into the bike; the lights are powered by a dynamo, so they’re on as soon as I start moving, and stay on for around five minutes when I’m stationary, thanks to a capacitor. The lights themselves actually have a sensor which means they come on automatically when it gets a bit gloomy, but I personally have the lights ‘on’ permanently, because it doesn’t cost me anything in perceptible effort pushing the dynamo.

How much of a difference is a dayglo jacket going to make on top of all this built-in visibility? I’d suggest next to none. If a driver doesn’t seem me with all this equipment, he or she just isn’t going to see me, full stop, and I’m not going to engage in a pointless arms race in an attempt to change that, any more than I would paint my car yellow, or add reflective strips to it, in an attempt to stop people crashing into it, or don a ‘pedestrian safety jacket’ to use a zebra crossing. We just don’t do this, and for good reason – there’s a reasonable baseline expectation of visibility, and one that should obviously be applied to anyone riding a bike in precisely the same way.

For what it’s worth, I’m fully in favour of the kind of equipment my bike has being ‘standard issue’ because it doesn’t add any difficulty or inconvenience to everyday life. It’s part of the bike, and I don’t even have to think about it – I don’t need to bring any equipment with me, because the bike does the job for me. But wearing special clothing to counter spurious accusations of ‘invisibility’? That’s just bullshit, frankly.