Posted on April 6, 2016 by aseasyasriding

It’s fundamentally important to bear in mind that the (sometimes vociferous) opposition to cycling infrastructure does not in any way represent mainstream attitudes and opinions. The vast majority of the British public are open to persuasion on cycling infrastructure; they have an open mind and are willing to see changes to the roads and streets they live on and use. As we’ve seen time and again with consultation responses, there are hundreds (even thousands) of angry opposition comments to schemes, but these are nearly always outweighed by the positive responses to the consultation itself, and always outweighed by the silent majority, who may not even be aware that changes are taking place, but support them once they have happened.

We’ve known this for some time. 2011’s Understanding Walking and Cycling Report found that only 9% of the population are what they call ‘automobile adherents’ –

[people] most satisfied with the present car system… underpinned by the belief that people have a choice of how to travel around and it is up to them to exercise it. Walking is regarded as a leisure activity and cycling practiced by enthusiasts or by committed environmentalists. People who subscribe to this discourse are against any measures that infringe their liberty to drive such as traffic calming even if this could improve conditions for walking and cycling. Indeed, this discourse suggests that walkers and cyclists should take more responsibility for their own safety when moving around the city.

By contrast, the remainder of the population are either people who see walking and cycling as ‘normal’ ways of getting about for everyday trips, and a part of their identity, or for the most part (58% of the population), people who don’t have any transport identity at all – people who are open to changing the way they travel about.  These are the kinds people who don’t get angry and yell when changes are proposed on the streets and roads where they live, but are quietly appreciative when those changes happen. And they’re the majority.

We don’t have to look much further for similar evidence. The latest British Social Attitudes Survey on Transport (published December 2015) found that, for journeys of less than two miles travelled by car, 41% of respondents said they could just as easily cycle (with the caveat that 64% of respondents felt the roads were too dangerous for them to cycle on). There isn’t hostility to cycling, per se, rather a reluctance to cycle on hostile and unpleasant roads.

Similarly the same survey shows that removing through traffic from residential streets – such a live issue at the moment – isn’t something that is out of favour with the general public. Opinion is actually finely balanced.

A persuasive, compelling campaign for making residential streets safe and attractive places, that engaged with undecided opinion, could win the day, even in the most unlikely of places – especially as the elderly are actually more in favour of ‘filtering’ than the the young.

When it comes to building cycling infrastructure on main roads, again, surveys and polling suggest wide public support. Vociferous opposition should not be taken to represent mainstream opinion. A YouGov poll conducted for Cycling Works London found 74% for building safer routes for cycling in London. Support was still strong (64%) for building cycling infrastructure, even when the question explicitly mentioned taking lanes away. 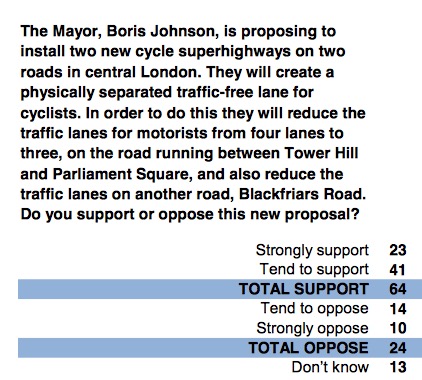 Support was even stronger in younger age groups.

Question from You Gov/Cycling Works poll

We have further evidence in the form of a more recent, nationally-focused poll (with a slightly larger sample) for British Cycling, covered by Peter Walker in the Guardian, with remarkably similar results. Again,  there is strong support for building cycling infrastructure on main roads in their local area (71%), with just 18% of those polled opposed. Support was even stronger if journey times would be unaffected, or improved – 79%.

Even amongst people who commute to work by car, cycling infrastructure on main roads which might delay driving by five minutes is still supported by 51% of respondents, with 34% opposed.

What all the research shows is that the majority of the British population are open-minded or willing to see change, and that the noisy, angry opponents really are a small minority. There is a large audience out there that is receptive to the idea of adapting and improving our roads and streets to make them work better for all users. Campaigns need to reach beyond the placard-waving objectors and engage with that audience, selling a positive message about how we can make the places where they live better.

Meanwhile councils and politicians shouldn’t be scared off by protestors who might seem to be numerous, but will only represent a very small proportion of local opinion. Change is happening – has to happen – and the British public will embrace it when it arrives.

This entry was posted in Campaigning, Inclusivity, Infrastructure. Bookmark the permalink.