Bus stop bypasses – there is no alternative

Posted on July 8, 2016 by aseasyasriding

Concern is obviously fine, but the problem here is that GSTT are arguing against bus stop bypasses – even going so far as to threaten legal action – while conspicuously failing to suggest any reasonable alternative design to the one being proposed by Transport for London. And there’s a very good reason for this.

There isn’t any reasonable alternative.

If you don’t build bus stop bypasses – putting the bus stop on an island, with cycling routed between that island and the footway – you are left with two options.

The first is what I would call ‘business as usual’; mixing people cycling with buses and heavy traffic on the road.

Cycling on the road, at the location where cycling infrastructure is proposed on Westminster Bridge

This is far from acceptable even for existing users, let alone for the non-cycling demographic that we should be building cycling infrastructure for – children, the elderly, and so on, the kind of people you rarely see cycling in London, because the road conditions, and because of the lack of cycling infrastructure like that being proposed by Transport for London on Westminster Bridge. The people who want to cycle, but can’t, because of conditions like those shown in the photograph above, and who do when infrastructure is provided.

Just for clarity, three people have been killed or seriously injured cycling on this eastern section of the bridge since 2006, including a woman in her fifties, who was killed in January 2006.

The other alternative, if we don’t build bus stop bypasses, is simply mixing cycling with walking on the footway. As it happens, this is currently the existing situation on the footway outside Guy’s and St Thomas’. 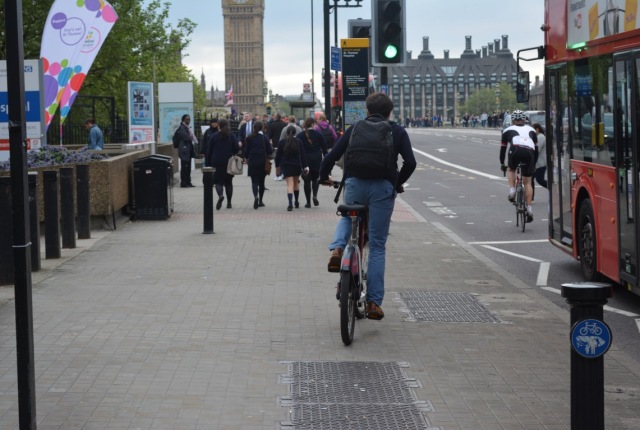 A hire bike user, cycling entirely legally on the footway outside Guy’s and St Thomas’

I don’t think this is acceptable at all; it’s not acceptable for people with visual impairment, or indeed for anyone walking or cycling along here. It’s not good enough. People walking and cycling should be separated from each other, on the grounds of both safety and convenience.

And that’s it. Those are the only two alternatives, if you refuse to build bus stop bypasses. You either expose people cycling to unacceptable levels of danger on the carriageway (while simultaneously limiting cycling as a transport option to the existing narrow demographic willing to cycle in hostile conditions), or you mix them with pedestrians on the footway. There is no magic solution that is waiting to be discovered.

This is why Guy’s and St Thomas’ posturing on this issue is deeply silly. There is no alternative. So instead of trying to block bus stop bypasses altogether, they need to work constructively with Transport for London on ensuring that the design of the bypasses is as safe for all potential users as is possible.

Please do also read Joe Dunkley’s piece on this issue, and sign the petition.

24 Responses to Bus stop bypasses – there is no alternative