Posted on September 8, 2016 by aseasyasriding

September 14th is Cycle to Work Day, an event which reminds me that a large proportion of the focus on cycling in Britain – and of the attempts to persuade or enable people to cycle – is on travelling to work.

This focus is, perhaps, unsurprising. For transport planners and engineers, ‘the commute’ presents the most difficult problems, given that is when peak demand for use of transport networks occurs. Fixation on commuting is understandable given that pressure on networks is much lower at other times of day, when other kinds of trips tend to be made.

Although cycling obviously doesn’t place as much pressure on the road network as motoring at peak times, it forms such a small proportion of trips in this country it only really becomes ‘visible’ at peak times, even in places like central London. Again, this makes it more likely that we will fixate on commuting – flows of cycling are concentrated at the periods when people are travelling to and from work, and that therefore seems to be the only kind of cycling that is occurring, or could occur. During the middle of the day, away from places where infrastructure has started to be built, cycling is essentially non-existent. That absence of ‘everyday’ cycling makes a focus on commuting more likely.

Midday on Regents Street. While cycling might become more visible on these kinds of streets at peak times, it is essentially completely absent during the day

Midday on the A10 in Hackney. Again, not much cycling happening here.

So it is likely that cycling to work figures will be around 2-3 times higher than the general cycling mode share across Britain.

As Rachel Aldred argues, this disparity is mostly likely due to ‘route sensitivity’ –

It seems like people are fussier about cycling environments when they’re not commuting. This makes intuitive sense if you think about it. When I’m riding to work, I know my route extremely well as I ride it most working days. I’m travelling on my own, so I only have to worry about my own safety, not that of any companions. I know where the dodgy bits are, where I need to concentrate super hard. I know the timing of the traffic lights – whether I have lots of time to get through or not. I know the hidden cut-throughs I can take to make the journey nicer. As I’m travelling with the peak commuting flows there’s often plenty of other cyclists around, creating a greater sense of subjective safety.

But it’s also down to the fact that groups of people who don’t work – children and the elderly – are themselves much less likely to tolerate more hostile cycling environments than people of working age. This also applies to the fact that women – who we know are, similarly, less traffic-tolerant than men – are less represented in the working population. That working population is preferentially composed of people who are more willing to cycle.

For all these reasons, commuting is the lowest-hanging fruit of cycling trips – the easiest of all the kinds of trips to enable. But focusing on commuting is really not good enough for a variety of reasons. Perhaps the biggest one is that commuting – while high profile – only forms a very small proportion of all the trips we make. In London, it’s just the bits in blue in the chart below.

The chart clearly demonstrate that commuting or work-related trips (in dark and light blue) are a small proportion of all the trips Londoners make. For under-16s and over-65s, commuting is essentially negligible, and even for 25-44 year olds, work-related trips are only around 30% of all trips made.

Just 16% of all trips are commuting, with a further 3% ‘business trips’. So again over 80% of all trips we make are not travelling to work – they are trips to school, or for shopping, or to visit friends, or for entertainment. The kinds of trips that make up daily life. Focusing on commuting – the routes commuters take – will necessarily miss out all these other kinds of trips. The latest National Travel Survey presents these results by gender –

From the National Travel Survey 2015

In both cases – and for women in particular – commuting is clearly a tiny fraction of all the trips people make.

I have heard it said that designing cycleways in London will only see them becoming increasingly clogged with lycra commuters. But I don’t think that is what will happen at all. A dense, high-quality network of cycle routes will see cycling increasingly dominated by those 80% of trips that aren’t commuting.

The kind of trips that are not being cycled at the moment. Children going to school. Parents going shopping. Teenagers going to visit friends. Cycling to the pub. And so on. 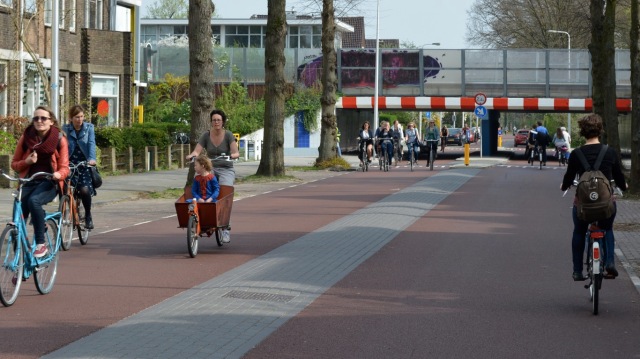 Building cycling infrastructure will not mean more of the same kinds of trips by the same people we see now. It will broaden out cycling beyond the narrow commuter-centric demographic that currently exists.

I strongly suspect it will also change the way cycling looks. To take just one example, people taking their children to school, then going off to meet friends, or to go shopping, are much less likely to faff around with cycle-specific clothing and equipment than your typical commuter. While it might make sense for a commuter making a specific trip with somewhere to change and to store cycle-specific equipment, that choice of cycle equipment, and changing in and out of it, is just too much effort for a linked series of short trips interspersed with other activities.

Building cycleways along, say, Euston Road in London will not lead to more of the same types of cycling we see now. It will lead to these kinds of cycling demographic shifts – trips by the children who live in the area, by parents, by elderly people, by people cycling to visit friends, and so on. Genuine mass cycling.

Only a small proportion of trips are commutes. We need to examine why all the other trips aren’t appearing, and plan and design to enable them.

17 Responses to Moving beyond commuting