Posted on February 7, 2017 by aseasyasriding

This post is the last in a series looking at the new Highways England standard on designing for cycling, Cycle Traffic and the Strategic Road Network, or IAN 195/16. The previous three posts can be found here, here and here.

As mentioned in my previous post, designing for cycling at junctions is important, and consequently junctions (rightly) occupy around half the length of the Cycle Traffic and the Strategic Road Network. I’ve split my coverage of junctions into two posts; this second post will look at roundabouts and ‘grade separation’, or in layman’s terms, ‘putting cycling at a different level from the road network’. That means bridges or underpasses – or a hybrid of both.

Grade separation of cycle traffic from motor traffic is the preferred solution for the crossing of all high speed road links and junctions.

Referring back to Table 2.4.2 in the document (covered in the previous post) we can see that grade separation is the only option for crossing roads with a speed limit of 60mph or higher.

Naturally the two types of grade separated crossings are underpasses and bridges, although this document describes them respectively as ‘underbridges’ and ‘overbridges’, which I think is an important reframing. Good underpasses will resemble bridges, in that the cycle traffic is passing under a bridge carrying the motor traffic above it.

Grade separation in the form of an underbridge in the Dutch city of Assen.

As in the photograph above, these ‘underbridges’ are clearly a much more attractive proposition than the kind of subterranean tunnels that ‘underpasses’ usually resemble in Britain. Explicitly framing this kind of grade separation as a ‘bridge’ is therefore very helpful. The photograph of an ‘underpass’ included in IAN 195/16 makes this obvious too.

The minimum width for cycle traffic through this kind of underbridge is set at 3m, with only a suggestion that designers should ‘consider’ increasing this dimension to increase natural light. I don’t think that’s good enough; it allows ‘boxy’ underpasses of this type –

A relatively new Highways England underpass, under the A23 near Handcross in West Sussex.

These are much less attractive than the Dutch stipulation that ‘walls should recede towards the top’. Here’s a path of equivalent width, but with sloping walls, in the Netherlands – 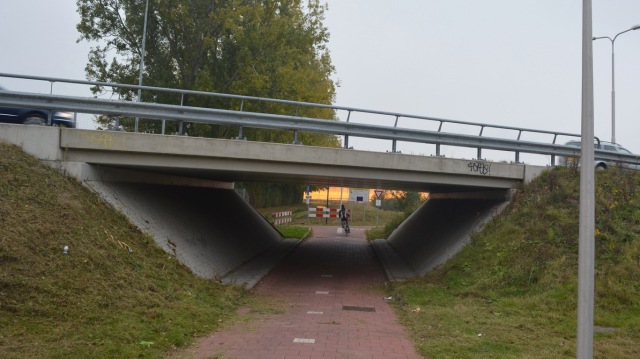 Much more open – so it would be good to have some stipulations about tunnel dimensions, beyond the 3m width recommendation.

We have similar width stipulations for overbridges – at least 3m, with 0.5m margin clearance at each side. There are useful recommendations on gradients; ramps approaching or departing grade separation should meet the design requirements set out earlier in IAN 195/16 –

It is recommended that the steepest part of a ramp (if it is unavoidable) should be located at the start of the ramp, where people are likely to be carrying most speed. Given that this has been taken into account, it is slightly disappointing that IAN 195/16 does not have anything to say on the matter of overbridges versus underbridges in general.

Underbridges should generally be preferred, mainly because the speed that a person cycling carries into them (on the downslope) can be used on the upslope; this isn’t the case with overbridges. Underbridges should also be preferred because they require less slope in general; they only need to accommodate the height of a human being, rather than the height of the large vehicles a bridge has to pass over. This is missing from IAN 195/16.

At the rear of the document there are extensive ‘grade separation’ diagrams, showing the appropriate way to separate cycling and motoring at junctions, particularly those with slip roads, which present a major safety hazard. Here’s just one example, showing cycle traffic (the dark line) routed under the slip roads, and under the roundabout. 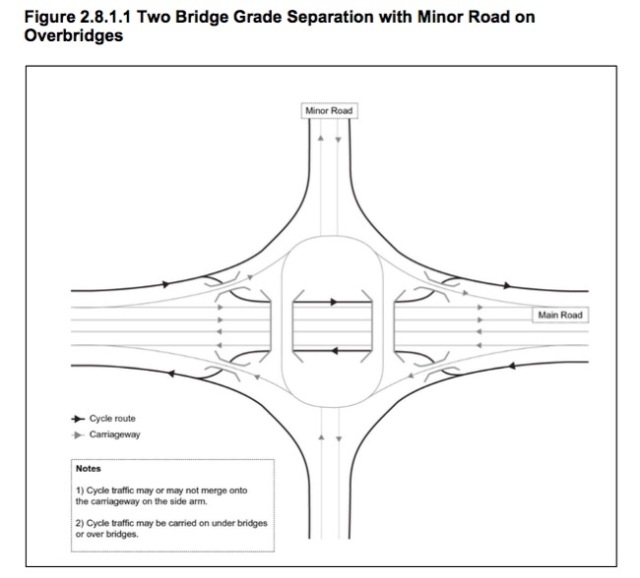 This kind of design removes any interaction with fast motor traffic altogether, something IAN 195/16 requires for 60mph+ speeds and for heavier flows of motor traffic. So we should expect to see this form of grade separation at new junctions being built by Highways England (but unfortunately not retrofitted to old junctions, as yet).

The one final ‘junction’ element covered by IAN 195/16 is roundabouts. Britain has a long history of failing to design for cycling altogether at roundabouts, and we still haven’t really managed to do so in the last few years, despite increasing design attention being paid to cycling. So the advice (and indeed requirements!) contained within IAN 195/16 is welcome, even if (unfortunately) there is very little UK good practice to draw upon.

On-carriageway cycle lanes shall not be provided on the perimeter of the circulatory carriageway, as they encourage cyclists to take up a nearside position where they are vulnerable to being hit by vehicles exiting the roundabout.

The only options are a ‘compact’ (i.e. a continental-style) roundabout with no lanes or markings, combining cycling with motor traffic, or a ‘separate cycle track’ around the perimeter of either ‘compact’ or ‘normal’ roundabouts, with a recommendation that the latter is preferable ‘because most cyclists will prefer off-carriageway provision as they will perceive it to be safer and more comfortable.’ Indeed, off-carriageway cycle tracks ‘shall be provided’ once the total throughput on a compact roundabout exceeds 8,000 vehicles per day.

There are all the elements in place in IAN 195/16 for Dutch-equivalent design of cycleways around roundabouts – how wide cycleways should be; when (and when they shouldn’t) have priority over motor traffic when crossing the arms of the roundabout. Unfortunately all this good advice (and requirements), much of it covered in previous posts, does not appear in the form of a useful diagram. There aren’t any illustrations on how to design for cycling at priority roundabouts (i.e. roundabouts that are not signal-controlled), which is a pity.

This isn’t too much of a problem for Highways England roads, where I doubt these kinds of designs would be used, but it is a design gap that needs filling, and this document could have provided design requirements and advice that local authorities could have copied, or drawn from.

As it is, we have some diagrams on how to design for cycling at signal-controlled roundabouts, including complete signal-separation, the use of holding exit motor traffic (the approach used at the ‘Dutch’ roundabout in Wandsworth) and the ‘cycle gate’ ASL (or ‘always stop’ ASL), favoured by Transport for London at a number of locations. IAN 195/16 has some useful suggestions on the appropriateness of each of these, in turn – pointing out, in particular, that the ‘cycle gate’ ASL

… but it is unfortunately hampered by the UK not doing any of this particularly well, anywhere. The only concrete example it can draw upon is the Wandsworth ‘Dutch’ roundabout, which is far from ideal.

And that’s pretty much it for IAN 195/16! I think this has been a fairly comprehensive overview. However, there may have been some elements or aspects of it that I have missed, and (in particular) I think there is some scope for examining how useful it might actually be in practice, in terms of improving the way England (and the UK) designs for cycling in general. So there is potential for a ‘summary’ post covering these kinds of issues, including those raised in the comments to all four posts.