There’s recently been some silly-season noise about making the use of bells compulsory in our newspaper of record, The Times.

This story seems to have been based entirely on five written questions from the MP Julian Lewis.

Re @thetimes article about bicycle bells, it is based on 5 parliamentary questions posed by Julian Lewis (MP for New Forest, Conservative) to @transportgovuk .
All 5 receive 1 answer from Transport Minister @Jesse_Norman https://t.co/ijCdWJMTIL pic.twitter.com/Qap6brq38F

But let’s (charitably) take this seriously, just for a moment. What does ‘mandatory use of bells’ actually mean? Am I supposed to ding every time a pedestrian hoves into view? In a town or a city, my bell would be ringing relentlessly. Let’s also bear in mind that plenty of people will object, often quite aggressively, to the ringing of a bell, interpreting it as akin to the honking of a car horn. A basic starting principle – before any of this nonsense ever gets anywhere near legislation – would have to involve getting some basic agreement and consensus about what people actually want and expect, when it comes to a form of audible cycling warning (or even whether they want people making a noise at all). It you can’t get the general public to agree, which I would imagine is more than likely, then there’s no point even embarking on legislation in the first place.

In any case, the general issue of bells, warnings and ‘silent rogue cyclists’ is symptomatic of basic design failure. I’ve probably cycled at least 500 miles in the Netherlands over the last five or six years. Not a huge amount, but enough to get a good flavour of the country. In all that distance – in cities, in towns, through villages, across the countryside – I can’t honestly remember ever having to ring my bell to warn someone walking that I was approaching. Not once.

A large part of that is probably down to the fact that people walking in the Netherlands are – understandably – fully aware that they will encounter someone cycling quite frequently. In general, it’s unwise to assume that, just because you can’t hear anything approaching, nothing is approaching – and this is especially true in the Netherlands. Being aware of cycling is just an ordinary part of day-to-day life, because everyone cycles themselves, and because they will also encounter cycling extremely frequently.

However, I suspect my lack of bell use is also due to the fact I rarely ever come into conflict with pedestrians, because of the way cycling is designed for. Unlike in Britain, where walking and cycling are all too frequently bodged together on the same inadequate paths, cycling is treated as a serious mode of transport, with its own space, distinct from walking.

No need for bells here, to warn people you are approaching

I don’t need to ring my bell to tell someone walking I am coming up behind them because we’re not having to share the same (inadequate) space. There are of course many situations in the Netherlands where walking and cycling are not given separate space – a typical example below.

However, these will almost always be situations where the numbers of people cycling, and of people walking in particular, will be relatively low. In practice, these paths function as miniature roads, marked with centre lines, and used by low amounts of low-impact traffic. Pedestrians treat them as such, walking at the sides, and the dynamics of path use are obvious and well-understood. If demand for these paths increases, such that people walking and cycling begin to get in each other’s way, separation of the two modes becomes a necessity. It is all blissfully rational.

Contrast that with Britain, where ‘cycle routes’ will often be nothing more than putting up blue signs to allow cycling on existing – often quite busy – footways. 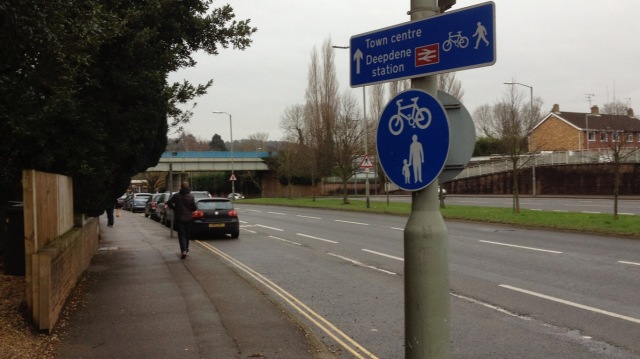 It isn’t hard to see why people walking will not be expecting cycling in these kinds of environments. It looks like a footway; feels like a footway. It is a footway. So users who are cycling then have to decide how best they approach someone from behind.

Bear in mind that there is absolutely no consensus on which of these techniques is preferable to people walking. Some people hate bells, because they think it implies they are being told to get out of the way. Some people don’t like noises, or calls, and apparently prefer the clarity of a bell, and what it signifies. Some other people might be deaf.

As you cycle up behind someone, there is obviously no way of knowing how that particular person will react, and what they will prefer. It is entirely guesswork.

My own technique is usually to approach, slow down a bit, and hope that the person gradually becomes aware of my presence. If they don’t, then I usually say ‘excuse me’. My bell is reserved for occasions when someone is stepping into the road without looking, or similar situations where I can foresee a potential collision occurring.

A short snippet below, on a path I use on a daily basis.

I can see that the two girls are aware that I am approaching, but I slow down in any case, until I am sure. The woman is not aware, so again I slow down, and have to use a verbal ‘excuse me’ to let her know I am there.

This probably isn’t perfect. Maybe there is a better way. But really, I don’t think there even is a ‘perfect’ way of dealing with these kinds of minor conflicts. They are all flawed. You are going to startle someone; you are going to do the wrong thing without even realising it; you  are going to annoy someone. It’s unavoidable.

But the solution to this problem is not MOAR BELLS or MANDATORY USE OF MOAR BELL. The basic issue here is crap cycling and walking environments. Every single location where people are being expected to use bells (or some other form of audible warning) will be one where cycling is not expected; where someone cycling is having to share the same space as someone walking; where there is not enough width for the two modes to peacefully co-exist. Bells are not the solution to this problem. Better design is.

The path in my video above is only a couple of metres wide, and has to accommodate cycling and walking in the same space. That’s just a straightforward recipe for conflict. If you think the answer to that conflict is bell legislation then you don’t care about cycling, and frankly you don’t really care about walking either. I don’t want to be cycling at little more than walking pace, having to ring my bell every few metres. I doubt people walking want to be having to deal with that either. I certainly don’t when I am on foot.

Let’s stop dribbling on about bells and instead ensure that our walking and cycling environments work for both modes, with clarity about where people should be and about expected behaviour, and with comfortable space for everyone.

24 Responses to You don’t solve design problems with bells